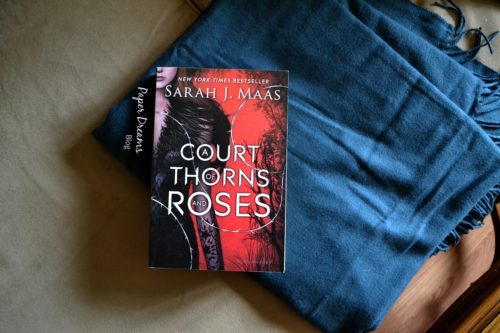 A Court of Thorns and Roses by Sarah J. Maas

Published: May 5th 2015 by Bloomsbury Children’s

I picked up this fantasy series because I fell in love with Maas’s writing with her Throne of Glass series so I knew I had to check out A Court of Thorns and Roses. The story appealed to me and I knew that I would not be disappointed.

Feyre is a huntress.

She thinks nothing of slaughtering a wolf to capture its prey. But, like all mortals, she fears what lingers mercilessly beyond the forest. And she will learn that taking the life of a magical creature comes at a high price…

Imprisoned in an enchanted court in her enemy’s kingdom, Feyre is free to roam but forbidden to escape. Her captor’s body bears the scars of fighting, and his face is always masked – but his piercing stare draws her ever closer. As Feyre’s feeling for Tamlin begin to burn through every warning she’s been told about his kind, an ancient, wicked shadow grows.

Feyre must find a way to break a spell, or lose her heart forever.

I’m going to start off by saying that I wasn’t totally in love with the story throughout the first part of the book. The story seemed off putting at first, like something was wrong but I couldn’t place it but little did I know that there was a reason for that, my instincts were right! (And I don’t want to give away too much about that because SPOILERS!) The last part of the book had me on the edge of my seat, well- squirming under my blankets because HOLY! I was not expecting such a dramatic, thrilling and gut- wrenching darker part of the story to reveal itself. But I should have known, it is Sarah J. Maas, she keeps you on your feet and has your heart literally pounding out of your chest. But what I’m meaning to say that is if you felt the way I did at the beginning of the story- just remain calm. The second half of the story will totally seduce and entice you into finishing every last bit of it.

Feyre is the main character of this story. Pronounced Fay-ruh. It is only through her viewpoint that we learn everything. She starts out as a cold, unforgiving huntress who tries to provide for her older sisters, Nesta and Elain and her father who are still caught up in their past life to really believe that they are poor. Feyre, herself is a realist and knows that if she doesn’t do something for her and her family then no one else will. So we know, right off the bat that Feyre has been dealt a hardship through her family’s misfortunes but we also know that she is strong and adaptable to her surroundings, which is important to remember. She is also fiercely protective of her sisters and uses them as reasons for motivation to keep surviving- not for herself but for them. This speaks a lot about her true character. And we learn all of this within the first few chapters.

Feyre has never known romantic love before. So when she enters the Spring Court to live with Tamlin and Lucien surrounded by new opportunities and lovely gardens her previous hate for the Fae slowly subsides. Feyre and Tamlin’s relationship slowly builds into something beautiful that explodes with fiery passion. One of my FAVOURITE scenes from the book is from the Fire Night celebration – it built up so much sexual tension, it was perfect. Conveniently, this night was also when Feyre meets Rhysand- another very important character of the plot.

Bring on the Fae world!

I felt this story, being the first, only SLIGHTLY touched on the Fae world. Even then, we aren’t given a lot of information about the Spring Court – thanks Tamlin. The other court that is most prominent in this story is very nearly the opposite of the Spring Court and even then we don’t learn a whole lot about it and I don’t want to talk too much about it without revealing spoilers. But seriously, there is a whole world of Fae out there Maas just barely gets into with this book. There is so much more going on out there, where the heck are all of the other courts?? What’s going on with them? This is another reason that Maas slowly claims part of your soul while reading, you want to learn more about her world building and about all the other players in the game. From reading her Throne of Glass series I know that Maas delivers with creating beautiful, alternate worlds that you wish you lived in. Can’t wait to see what’s next!

Action/Adventure: 10  *Feyre is in a new and exciting world with magic, a curse and many, many bargains.

Fantasy: 9  *Lots of magic! I mean it’s the Fae world- many fairies and otherworldly creatures around!

Similar to Beauty and the Beast?

Some say this book is a rendition of Beauty and The Beast but obviously with a lot more Fae background. Feyre is supposedly Belle and Tamlin is the Beast. There was only some parts of the story that I could see similarities too such as the curse that is placed upon Tamlin and the Spring Court, for fifty years they have been wearing masquerade masks and unable to remove them until the curse is broken. This is similar to the curse the Beast is under with his household, unable to transform into their human forms. However, as much as Feyre is portrayed as Belle she does’t carry a lot of her characteristics – she is not a gentle, loving girl who prances around and sings with the animals – she is a huntress, doing everything she can to help her family survive starvation. Tamlin, on the other hand, does remind me more of the Beast; he is cold and reclusive until he starts to know Feyre. There are some similarities between the two but there are also some major differences.

But yes, I definitely recommend this book!! I recommend it for older teens and up. If you don’t like stories about the Fae then it’s not for you. There is some explicit content throughout the story – no foul language but there is a few sexually explicit scenes that don’t leave a lot for the imagination. She writes them really well though!  I am so excited to get more into this series. I actually have read the next book- A Court of Mist and Fury so it was super hard not to be biased about this review since I know quite a bit more about what happens. But seriously, check this book out, you won’t regret it!

If you have read it, what did you think? Who was your favourite character? What do you think will happen next? (If you haven’t read ACOMAF)