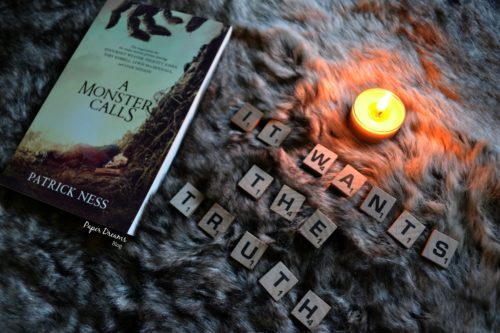 A Monster Calls by Patrick Ness

I bought A Monster Calls after seeing so many people rave about it on Instagram. Plus with the movie coming out soon, I usually like to read the book before I see the movie!

An unflinching, darkly funny, and deeply moving story of a boy, his seriously ill mother, and an unexpected monstrous visitor.

At seven minutes past midnight, thirteen-year-old Conor wakes to find a monster outside his bedroom window. But it isn’t the monster Conor’s been expecting– he’s been expecting the one from his nightmare, the nightmare he’s had nearly every night since his mother started her treatments. The monster in his backyard is different. It’s ancient. And wild. And it wants something from Conor. Something terrible and dangerous. It wants the truth. From the final idea of award-winning author Siobhan Dowd– whose premature death from cancer prevented her from writing it herself– Patrick Ness has spun a haunting and darkly funny novel of mischief, loss, and monsters both real and imagined.

I have never read anything by Patrick Ness before but I have heard many great things about his work. I think starting off with A Monster Calls was a great introduction towards the kind of author Ness is and how he has captured so many readers. It was a surprise to find out that A Monster Calls was not just his work but Siobhan Dowd’s original idea. I find it fascinating that he took one of her ideas and spun a tale of such grace and sorrow. If you go into this thinking that it’s a happy book, well, any story that deals with cancer is most likely sad in some way and this one is not exempt. Have your tissue box ready.

Thoughts on the M.C.

The story was told through Conor, the young protagonist. And when I mean he was young, it only pertained to his age as he seemed to have a very mature, grown up approach to everything. A story like this, with ominous and heartbreaking undertones is interesting to read from a child’s perspective. I think we always have a sense of shielding them from the worst things life has to offer and we want to protect their innocence. But something like this… it’s hard to protect from. Ness and Dowd take a very real and raw feeling that I think a lot of people can relate to and just lay it out there that it’s okay to think these things. We’re all just human.

This was a short read but a very powerful one. Ness and Dowd wrote a very complex human feeling towards a devastating sickness and presented it in such a way that was completely understandable. It is amazing to me that Siobhan Dowd wanted to write this story as she herself, was going through cancer. But I think that also goes to show what kind of person she was. A lady of grace who wasn’t afraid to face her fears and wanted to let everyone else know to- that it was okay.

My favourite character was the tree. I don’t want to give too much away. But it- he?- was so sassy. And wise. Which is how I see trees being generally- wise old beings. It was the real MVP of this book. You’ll understand why when you read it!

Self Help (?) – 6    *Only because I think it really could help loved ones going through a high stage of cancer or any other fatal disease – maybe puts it into perspective.

This was a very interesting read. For some it may be a little hard to handle due to the nature of the contents but I think it’s very necessary. It was a very well though out story that handled a difficult topic with as much grace as it could receive. I highly recommend it to anyone. This is not just a children’s or young adult novel, anyone could read this and take away something from it. I highly praise Siobhan Dowd and Patrick Ness for their work.

If you have read it, what did you think? Did you like it? What did you take away from it?

If you would like to buy A Monster Calls through me, I am an Indigo/ Chapters affiliate please click HERE and know that I will receive a commission if you buy! 🙂