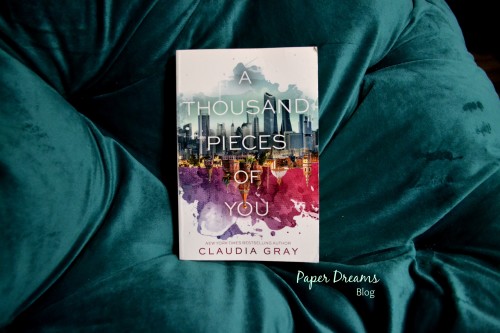 A Thousand Pieces of You by Claudia Gray

Again, I started seeing this book on Instagram a lot and it piqued my interest (seems to be happening more frequently). Along with the plot I also fell in love with the cover art and knew that I must own it and have it on my shelf.

Cloud Atlas meets Orphan Black in this epic dimension-bending trilogy by New York Times bestselling author Claudia Gray about a girl who must chase her father’s killer through multiple dimensions.

Marguerite Caine’s physicist parents are known for their groundbreaking achievements. Their most astonishing invention, called the Firebird, allows users to jump into multiple universes—and promises to revolutionize science forever. But then Marguerite’s father is murdered, and the killer—her parent’s handsome, enigmatic assistant Paul— escapes into another dimension before the law can touch him.

Marguerite refuses to let the man who destroyed her family go free. So she races after Paul through different universes, always leaping into another version of herself. But she also meets alternate versions of the people she knows—including Paul, whose life entangles with hers in increasingly familiar ways. Before long she begins to question Paul’s guilt—as well as her own heart. And soon she discovers the truth behind her father’s death is far more sinister than she expected.

A Thousand Pieces of You explores an amazingly intricate multi-universe where fate is unavoidable, the truth elusive, and love the greatest mystery of all.

I am a huge fan of the multi- universe and inter-dimensional time travel. I find it fascinating and the way Claudia Gray portrayed it in this story was awesome. It fulfilled my expectations. She displayed many types of universes that exist alongside our own. Universes that have far surpassed our technology or that have barely begun to break into it. Even a universe that is so like our very own but has subtle differences such as a different color of duvet on your bed or a different picture on the wall. The concept is very intriguing and I love that Gray explored multiple variations within Marguerite’s story.

On top of time travel, this story also plunges deep into the confusing topic of fate. I am not entirely sure I am on board with it personally but it is interesting to this story line and is presented strongly.

Marguerite Caine is an interesting character. She is dedicated to finding Paul- her father’s killer and seeking justice- whatever it takes. However, as you get into the story you find that she has complicated feelings towards Paul Markov and begins to doubt what she’s been told about him.

Marguerite also deals with feelings of being the black sheep of the family. As in, her parents are both super brilliant scientists and her sister, Josie is off at University studying Oceanography that she doesn’t quite know where she fits in. Instead of calculations and numbers she prefers to spend her time with paints and a canvas. I think a lot of people will relate to Marguerite as it is easy to feel like you are different and don’t fit in. What she realizes as she is dimension jumping is that she is very nearly the same in all of the dimensions- she expresses herself through some sort of medium of art and has a deep ferocious love for her family- no matter who they are. And this sticks with her as she makes the decisions that she does.

Claudia Gray does not happen to be Claudia Gray’s real name. Her real name is Amy Vincent. She simply chose a pseudonym because she thought it would be fun to choose her own name. Seems pretty cool and maybe a bit anarchist to me! She calls New Orleans home and is a full time writer. She is also well known for her Evernight and Spellcaster series. I haven’t had the chance to read  either yet but they have been added to my TBR pile (of course). Claudia Gray (as I will continue calling her) has also written a Star Wars- possible love story- novel called Lost Stars. I have very good intentions to check out that book as well. If you would like to check out more on Claudia Gray and her books, check out her website here!

Mystery: 6 *You are wondering why Paul would kill Marguerite’s father.

Romance: 7 *Fate has a funny way of showing who you end up loving and who you won’t.

I recommend this book to anyone who loves the idea of time travel, multi- universes and fate. There is some sexually implied content but it is written PG, no erotic details. By the end of this novel I was squealing with happiness over the surprises and shocked by the betrayal. It was definitely a fascinating story that was well written and I suggest running out and buying it now! This is the first in the series- the second has been released and is called Ten Thousand Skies Above You (another beautiful cover to follow) and I hope to get my hands on it as well. I hope you enjoyed this review, let me know in the comments below.

Random question for you as we depart- if you believe in fate, do you believe that in all multi- universes you would be doing exactly what you are – or some variation of it – right now? If I was, I would still be an addicted bookworm/nerd. No complaints here. 🙂

P.S. Check out my Spoiler Review Vlog for A Thousand Pieces of You. Only watch if you have read the book please!! (Or don’t care if it’s spoiled for you)