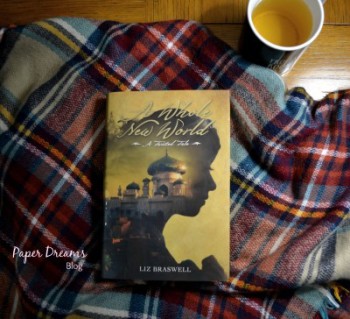 A Whole New World caught my eye by chance one day when I was in a bookstore. I am a huge fan of Aladdin and as soon as I read the synopsis I knew I had to read it. Also the jacket cover is beautiful!

Welcome to a new YA series that reimagines classic Disney stories in surprising new ways. Each book asks the question: What if one key moment from a familiar Disney film was changed? This dark and daring version of Aladdin twists the original story with the question: What if Jafar was the first one to summon the Genie?

When Jafar steals the Genie’s lamp, he uses his first two wishes to become sultan and the most powerful sorcerer in the world. Agrabah lives in fear, waiting for his third and final wish.To stop the power-mad ruler, Aladdin and the deposed Princess Jasmine must unite the people of Agrabah in rebellion. But soon their fight for freedom threatens to tear the kingdom apart in a costly civil war.

What happens next? A Street Rat becomes a leader. A princess becomes a revolutionary. And readers will never look at the story of Aladdin in the same way again.

I’m not sure if I just had big expectations or that this version just did not live up to its potential for me to like it but sadly I was not a big fan of it. I have loved the original Disney story since it came out, watching it daily as a youngin’, professing my undying love for Aladdin and hoping to one day marry him. I think I even helped in persuading my parents to name my sister Jasmin. No joke, they really did! Anyways, suffice to say, Aladdin has been my all time favourite Disney story. This book had a lot to live up to my eyes and unfortunately it just did not reach it.

For the first 50- 100 pages or so, the beginning is written exactly like how it’s scripted in the movie, nearly word for word. I was surprised by this, I wasn’t expecting it to be so spot on. However, since it’s from Disney Press I guess that was to be expected. So all of the lovable characters are there; Abu, Aladdin, Princess Jasmine, Rajah, Carpet and Genie. That is, until the twist in the plot happens. And I liked the twist, it was fine. The story itself just didn’t seem that strong. There were a lot of dark proponents to the story brought on by Jafar but since the writing was rated like PG I felt it wasn’t as mature as it could have been for an older audience. That’s maybe my preference too though, I would have preferred it to be 18A instead of PG13.

I would have liked to have seen more of the Genie in the story but since this was an altered version, he wasn’t in it as much. When he was in it, I think the author tried to live up to his character’s personality (and I mean Robin Williams is the only one who can really do that) but they tried too hard so it didn’t really fit what the Genie would normally say or do, his characterization was off. I felt this way about Aladdin and Jasmine at times too. Jasmine wasn’t as tough and sassy as she could have been. Aladdin thought things that didn’t make him seem very bright, which I know is not the case. So, I give props to Liz Braswell for trying because I wouldn’t doubt that it’s hard to try and continue the writing of the characters in a new light especially the characters of an iconic story.

There were some side characters that were added to the story to further diversify it and give more of a background of Aladdin’s character. For example, at the beginning there is a written scene between him and his mother that is character buildup for Aladdin. His two friends, Morgiana and Duban are frequently in the story line as well and because of this you learn more about Agrabah and the ‘Street Rats’.

The majority of the setting took place in the streets, alleys and dark corners of Agrabah rather than just the palace which was an interesting feature. You read more about the people living in the streets than behind closed gates. One of the things I did appreciate- a different viewpoint.

Action/Adventure: 7  *Quite a bit of it. They have to defeat Jafar somehow!

Fantasy: 7  *There is some but not in the way that you would expect since this time Jafar is the first one to have his wishes granted…he gets to play.

Okay, so by now I think you get the hint that I didn’t particularly like this novel, which is too bad because I wanted to like it and I thought the concept was really neat. It just didn’t float with me. I would recommend it to people who like retellings of Disney stories. There is no coarse language or sexual mature content, I would rate it PG13. For those who still want to give it a go, be my guest! If you have any comments or thoughts you would like to share on this book or about my review, please drop a line below!