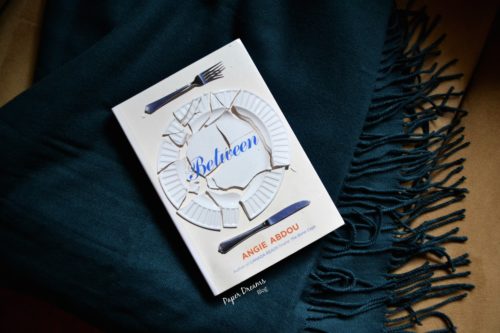 Between by Angie Abdou

I first heard of Between by Angie Abdou this summer when I attended Festival of Words 2016 in Moose Jaw, Saskatchewan. Angie, herself was speaking and moderating multiple panels at the festival. I was instantly drawn to her warm, friendly and funny personality. So when she started talking about her book, Between, I knew I had to read it. Basically, I was sold on Angie before I even picked up any of her books. SO! I went to buy her book at the Festival and it was SOLD OUT after a day! So, that’s how you know it’ll be good. So, randomly one day in September I was out and about checking our secondhand bookstore in Moose Jaw – Posthorizon Booksellers and I randomly thought to check that maybe they had it – and they did! So I snatched it up. Between is an Adult Fiction novel with some R- rated content.

Vero and her husband Shane have moved out of the sweet suite above his parents’ garage and found themselves smack in the middle of adulthood―two kids, two cars, two jobs. They are not coping well. In response to their looming domestic breakdown, Vero and Shane get live-in help with their sons―a woman from the Philippines named Ligaya (which means happiness), whom the boys call LiLi. Vero justifies LiLi’s role in their home by insisting that she is part of their family, and she goes to great lengths in order to ease her conscience. But differences persist; Vero grapples with her overextended role as a mother and struggles to keep her marriage passionate, while LiLi silently bears the burden of a secret she left behind at home.

Between offers readers an intriguing, searing portrait of two women from two different cultures. At the same time, it satirizes contemporary love, marriage, and parenthood by exposing the sense of entitlement and superiority at the heart of upper-middle-class North American existence through a ubiquitous presence in it: the foreign nanny. Angie Abdou comically and tragically tackles the issue of international nannies by providing a window on motherhood where it is tangled up with class, career, labour, and desire.

First of all, I was surprised by how much this story evoked a wide arrange of emotions within me. I felt things like;

One of the strongest aspects of the story was that Abdou wrote from both Vero and Ligaya’s perspectives. She added so much more depth to the story with the dual perspectives rather than just having it one sided. However, if I was to pick a perspective I enjoyed reading more than it would have been Ligaya’s. And I think that’s because I enjoy an outsiders view on our culture, I found it very interesting.

My personal opinion about myself becoming a mother is very complicated- it’s not in my game plan for awhile but I feel that there are so many perspectives out there other than the light, fluffy, happy to have given birth perspective. No one ever talks about the depression and separation from society motherhood invokes on you or how overwhelmed you suddenly become looking after this tiny human being and having literally no time for yourself. Post- partum depression is a scary thing that should be talked about more. The outlook that Abdou took here on motherhood was way more real than anything else I’ve come across. She does not tread lightly over Vero’s depression but is rather very blunt about it all and I so appreciate this outlook because it’s very real, there are a lot of women who struggle with this.

Least favourite part of the story

My least favourite part about this story was where the plot took a twist as Shane and Vero plan a twisted holiday for just the two of them. Without giving away too many details as this is well into the middle of the story, I just wanted to note here that I was given a strong distaste towards the story and I am very confused on why this part was written in by Abdou. It seemed very fragmented from the rest of the story. As well, there is some strong sexually explicit scenes that occur here that also kind of threw me off and if you aren’t prepared for them well- I’m giving you a warning now!

Nannies- where do they fit in?

The whole idea behind the nanny is interesting. I have personally known families to have brought nannies over from Scotland or Ireland to look after their children in Canada and I have also known Canadian girls that have went over to European countries to nanny as well. Abdou wrote Ligaya’s thoughts on being a nanny, on how confused she was towards the North American culture of the women planning child rearing like it’s a separate part of the rest of their life. Ligaya wondered why it was looked down upon that women couldn’t sleep with their babies, that it was culturally wrong whereas she just took Vero’s kids to sleep with her as she believed it helped their stress levels and overall sleep pattern. Who’s to say this is wrong? We have so many stigmas against proper parenting and what’s right and wrong, IT’S OVERWHELMING.

Between is a very well written story. It’s insightful, witty, blunt, harsh, sexy, gasp- worthy. Abdou has a phenomenal voice and really stretches it to speak about the hard truths life has to offer. I praise her writing skills and recommend Between for even just that reason alone!

More on the Author

Angie Abdou was born and raised in Moose Jaw, Saskatchewan (my home!!) and graduated with Honours from The University of Regina for English. She went on to get an M.A. from the University of Western Ontario as well as a Ph.D from the University of Calgary. She is an Assistant Professor of Creative Writing at Athabasca University. She has two children of her own and has received so many amazing awards for her novels. Her other books include; The Bone Cage, The Canterbury Trail and collection of short stories in Anything Boys Can Do. I plan on reading all of these and any other work that she may bring out, which I sincerely hope she continues.

Drama: 7  *Lots of emotions and thoughts being expressed between the two ladies.

Romance:  6  *Not your typical love story. Abdou explores the feelings between Vero and Shane as their long term monogamous relationship has evolved from just the two of them, to the four of them.