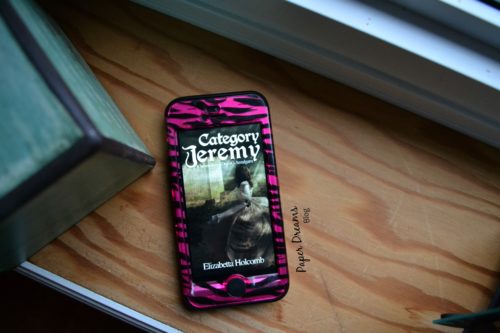 I received Category Jeremy as an ARC from the author, Elizabetta Holcomb. I raved about her first story The Guardian (read my review here) which is sort of a prequel to this series. I also did an interview with Elizabetta Holcomb after reading and reviewing The Guardian which you can read here! So I was really excited to receive another story about the Dover’s Amalgam and find out what’s happening next!

Jeremiah Cameron Tremaine
Within the body of Jeremy is a weapon of mass destruction. Being the strongest host in Dover’s Amalgam, he is a hurricane of a class all by himself. The strongest host alive. Living between two time periods: one life in medieval Dover and the other in modern Louisiana, England, and the Cayman Islands, he finds life becomes a cluster of unfortunate events that bring him face to face with the girl he left behind.

Beau Angelle Benoit
Eight years ago, something happened to Jeremy. After being lost in Hurricane Libby, Beau was there when they found him naked, half starved, and surrounded by dead animals. She could hear him speaking without ever opening his mouth and when he touched her, she could feel the energy he contained. But instead of trusting her with his abilities, he left her to face government officials who probed her mind and a town that thought her a lunatic.

Reunited
Jeremy is back in his hometown of Gueydan, Louisiana to help with church reform and to dismantle host formation as the dawn of mega storms comes to the south coast. When he sees that Beau is in need of hero, he is more than happy to be that person. Wanting to see her reputation restored, he will do anything to make right the wrongs he is responsible for in her life—even if it means to lie to her so he can protect her from becoming a target for the enemies of Dover. The Hun’s are back and forming an army of host of its own, plowing down anyone that stands in their way of power and complete control of Dover’s Amalgam.

Okay, so this book begins again a few years after The Guardian finished with Jeremy quite a bit older and pining after Beau. Beau, who was left behind as Jeremy was taken by Jareth Tremaine to find out what he really was and what kind of power he wielded. Jeremy and Beau have lived separate lives for the past few years but that’s all about to change.

Get ready for a lot of Jeremy and Beau time. This is probably one of the biggest strength of this story. The romance between Jeremy and Beau. There is really great chemistry between the two that kept me turning the pages and I was anxiously waiting to see what would happen between them. There is a fantastic scene where Beau is in danger and Jeremy comes to her rescue and the supernatural occurrence that happens is pretty neat and I love how it was written!

I was a bit disappointed with how short the story was. It focused a lot on Jeremy and Beau, which was great but The Guardian set the series up with a lot more supernatural occurrences happening with an evil villain who had The Huns that wanted to take over the Amalgam. Category Jeremy dealt with that side a bit but when it did, it felt very rushed near the ending. I just felt it could have been drawn out a bit more, giving it some more depth. I don’t see this as a negative thing, I just wanted more!

Another really neat aspect that I don’t think was played up enough throughout it was the time travel! I absolutely love the idea of time travel and was happy it was incorporated in this story. I think it would have been cool to focus more on the castle that Jareth owns and that time period as well since the family is able to cross over from different time periods easily enough.

Action/Adventure: 9  *Always an adventure to be had here!

Fantasy: 9  *Supernatural powers like turning into a storm- BEING a storm? Neat concept.

Science Fiction: 7  *I want time travel to be my super power.

Yes, I definitely recommend Category Jeremy. It’s a fun, light hearted read. I love the romance in it mingled with the supernatural powers, it keeps it interesting. You will probably fall in love with Jeremy, just as I have. The story is mostly PG-13 although in the future if it was bumped up to 18A, I wouldn’t complain ;). So, yes if you haven’t read Category Jeremy, then you should!! However, please read The Guardian before this one, as it will make more sense. You will fall in love with this series and probably beg for more, just like I do!

If you’ve read Category Jeremy, what did you think? Favourite character? Favourite scene? If you were in this story and had powers, what could you do? Let me know in the comments below!