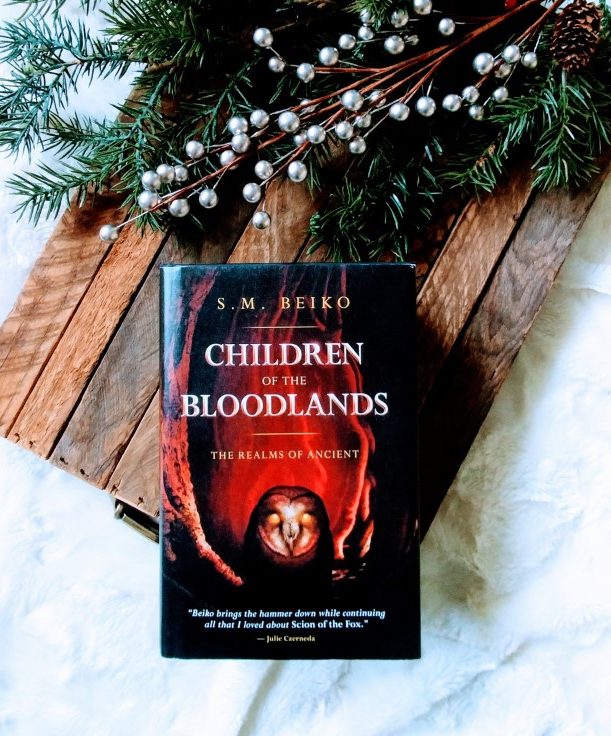 Children of the Bloodlands is the second installment in The Realms of Ancient Trilogy by S.M. Beiko. ECW Press was kind enough to send me a beautiful copy of this book in exchange for an honest review. I read Scion of the Fox (#1) back in February and while it was a bit of a whirlwind I thoroughly enjoyed the urban fantasy. I was super excited to receive this book from ECW Press and dived right into it as soon as it arrived!

Three months after the battle of Zabor, the five friends that came together to defeat her have been separated. Burdened with the Calamity Stone she acquired in Scion of the Fox, Roan has gone to Scotland to retrace her grandmother’s steps in an attempt to stop further evil from entering the world.

Meanwhile, a wicked monster called Seela has risen from the ashy Bloodlands and is wreaking havoc on the world while children in Edinburgh are afflicted by a strange plague; Eli travels to Seoul to face judgment and is nearly murdered; Natti endures a taxing journey with two polar bears; Phae tries desperately to obtain the key to the Underworld; and Barton joins a Family-wide coalition as the last defense against an enemy that will stop at nothing to undo Ancient’s influence on Earth — before there is no longer an Earth to fight for.

Darkness, death, and the ancient powers that shape the world will collide as our heroes discover that some children collapse under their dark inheritance, and those that don’t are haunted by blood.

I’m not going to lie, one of the main reasons I was anticipating this book was because I really wanted to see what else would happen between Roan and Eli and not just if something were to happen romantically – some of my favourite scenes from Scion of the Fox were to do with both of them but especially because the ending of the first book left them on such a cliffhanger. Enter this book – still a fair bit muddled between the two of them but there is MORE and that’s what I wanted.

The character development grew deeper in this expansion which was something I really appreciated and definitely enhanced the story line. Most of the main characters were in high school when this adventure began but now they are out on their own – becoming adults while trying to figure out everything else that was thrust upon them.  I felt like Natti was a bit of thrown in character in the 1st book and kind of again in the 2nd book but she wasn’t a character I felt a deeper connection with to be honest. Roan is very pigheaded and wants zero help with anything – another character I don’t always feel a connection to but still enjoy reading. Barton has small but very important parts to play out in each novel and I admire his determination and love his feelings for Phae. Eli has always been an interesting character to me and his lack of trust in anyone else other than himself makes him so lonely until he’s Part Of The Gang and he would totally cringe knowing that but probably also feel a little warm on the inside because of it and I love that. Phae was just the best friend to Roan – the main character in Scion but in Bloodlands – she is EVERYTHING. I just love where S.M. Beiko went with Phae’s story and really enjoyed the different perspective she has to everything that’s happening to her and how she genuinely feels about it all – I felt more of a connection with her in this book for sure! Phae was my number one in this book!

Also – new character alert – I LOVE Saskia, the little girl who is hero?/villain? – You’ll find out! One of my favourite scenes was with her, Eli and Roan driving in the car and the feeling it created.

Moving away from character growth, the enormous expansion of the story was phenomenal. Building on the Realms of Ancient and how the Paramounts and their stones greatly affect each other while all being connected in some way was really, really cool. I was really fascinated by how the story played out and S.M. Beiko really nails it in the world-building department.

The story itself was well written and fleshed out. I feel Beiko did a really good job of “showing” rather than “telling” for her books. It kept my mind actively participating and reading word for word rather than just skimming.

I think maybe the only thing that I stumbled over from time to time was remembering that Roan’s voice was in 1st person while all the other characters voices are written from 3rd person.

I don’t know what else to say other than I LOVED IT, truly. I’m giving it a…drum roll, please:

YES. I would definitely recommend! Although, I definitely recommend you read Scion of the Fox before Children of the Bloodlands otherwise you won’t have any idea what’s going on. I would rate this series as a PG – 13 between the two of them so far. There are a few crude words used but not near enough to flag it.

S.M. Beiko is a Canadian author who lives in Winnipeg, Manitoba. Her writing is wonderful and I urge you to pick up this trilogy – THE BRILLIANT DARK – the 3rd installment will be out in 2019!