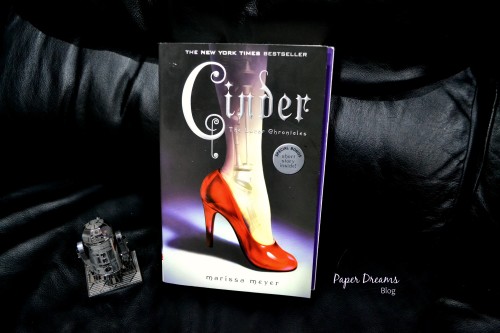 I’ve known about Cinder for awhile but never really picked it up. Once I became more active in the bookstagram (the book community on Instagram- add me at paperdreamsblog!) I started seeing it more frequently. I asked for it for Christmas and received it 🙂 I wasn’t sure about all the hype on Instagram at first but I do believe the hype now! I loved Cinder, the majority of the time I read it was during commuting times and on work breaks as I couldn’t get enough of it. I also really like that more twisted and altered adaptations of Disney stories are being recreated. Cinder is loosely based on Cinderella (if you didn’t catch that) 😉 .

Humans and androids crowd the raucous streets of New Beijing. A deadly plague ravages the population. From space, a ruthless lunar people watch, waiting to make their move. No one knows that Earth’s fate hinges on one girl.
Cinder, a gifted mechanic, is a cyborg. She’s a second-class citizen with a mysterious past, reviled by her stepmother and blamed for her stepsister’s illness. But when her life becomes intertwined with the handsome Prince Kai’s, she suddenly finds herself at the center of an intergalactic struggle, and a forbidden attraction. Caught between duty and freedom, loyalty and betrayal, she must uncover secrets about her past in order to protect her world’s future.

Even though Cinder is based on the future of our world it felt like reading about a different world entirely. The cyborgs and lunars and advanced technology stretch the normalcy from our society. This felt like a Stars Episode the more I think about it. Cinder reminds me of CP30 since she is a cyborg and technically having a ‘master’, her stepmother which she has to answer to. Unlike young Anakin and Luke Skywalker who somewhat value their cyborgs, Cinder is not valued at all. Humans use cyborgs so their lives are easier. For instance, Cinder is known for being a great mechanic in New Beijing and all her work earnings go towards her stepmother and sisters lifestyle. And it is no different from the lunars perspective, probably even worse actually. The magical beings from the moon look down on cyborgs in distaste and scowl at their existence as they have no use for them whatsoever. Poor Cinder doesn’t even stand a chance.

Iko was definitely one of my favorite side characters. Authors have to build up their main characters because they are the most prominent but when a side character stands out such as Iko did it makes it that much more endearing. Another Star Wars reference here, Iko reminded me of R2-D2 or BB-8 (from the new movie). Although she doesn’t make quirky beeping noises but actually responds like a human would she has a silly sense of humor and makes quirkier remarks. I couldn’t really visualize what she would look like as an android other than picturing R2-D2 so it would be fun to see some sort of fan fiction art based on her. Eh?

I was pleasantly surprised with the change in story line from the original with having Peony (one of the stepsisters) being friendly towards Cinder and not treating her like a huge piece of metal and bolts. You will love Peony because of her childish crush on the Prince and her innocence to the world while wanting to be involved with Cinder and Iko’s antics. The other stepsister is pretty much non- existent in the story line other than one rather nasty incident that will make your heart go out to Cinder even more. Well played, Marissa Meyer, well played.

The story’s perspective is not just from Cinder’s, there are a few chapters from Prince Kai’s as well which helps diversify the plot. Also, Prince Kai and Cinder are so cute!! I love their interactions. They have a good connection despite Cinder not wanting to tell Kai that she is a cyborg.

Fantasy: 7  *The magical beings that are the lunars have a pretty big role in the story.

Science Fiction: 8  *Cinder is a cyborg. And a bad ass one at that. So pretty cool.

I definitely recommend this story for those that love a good alternative adaption from the original Cinderella story with a sprinkle of moon magic and quirky metal bits. It is rated PG- 13. No offensive language or erotica here. Beware!! This is the start of a series, this is not a standalone! Be prepared to want to finish the rest of the series, which also focuses on other characters with altered Disney stories. If you enjoyed my review, please leave a comment below, I’d love to hear from you!