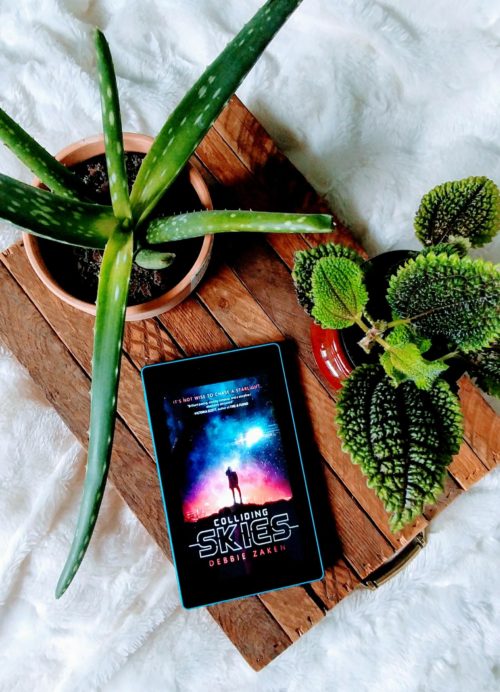 I have been reading a lot of science fiction lately, so here’s another: Colliding Skies by Debbie Zaken! The cover is so beautiful! I received Colliding Skies from Oftomes Publishing, a micro- publishing house run by UK booktuber Benjamin Alderson (He’s super fun btw, check out his booktube here!) in exchange for an honest review. Colliding Skies comes out March 6. 2018!

Since Skye Reilly can remember, she has been looking up to the stars. With high school graduation upon her, her telescope in one hand and her college acceptance letter in the other, she has life as meticulously mapped out as her star chart. That is, until the Celeians arrive and she meets Ethan, an alluring alien. Ethan collides into her like an asteroid, causing a gravitational shift in Skye’s trajectory and hurling her life into a cataclysmic collision course of interplanetary proportions.

The Celeians promise many things. An end to disease, global warming, and famine. The knowledge to help humankind. Despite the suspicions surrounding the intriguing aliens and rising anti-alien protests, Skye gives Ethan her trust, and eventually her heart. The very heart he could stop with a lethal electrifying touch of his hand.
When the Magistrate, a council of alien leaders, threatens to put an end to their interspecies relationship, following her heart could cost Skye her life and the lives of everyone she loves.
Not even light can escape the pull of a black hole.

Getting into Colliding Skies

So, it took me a few chapters to get into the story to see where it was headed and to see whether I would like it. The first bit seemed very highschool drama ish to me but that’s fairly obvious since that’s the main age demographic so cue the drama. Anyways, Skye Reilly is a senior high school student stuck in the revolving door of normalcy. She’s a quiet and meek character who expresses her feelings for Taylor, another student at school while hanging out with her friend Emily and on and off again boyfriend Lucas. UNTIL. The aliens arrive. That’s when things get SHOOK. And that’s when my interest in the story grew. I enjoyed the second half of the book more and was really interested in what would happen.

Thoughts on the main character

I liked Skye okay. I liked that she liked physics and astronomy and did stargazing things with her dad. But you know who she reminded me of? Bella Swan. From Twilight. You decide where to go with that.

The Celeians were interesting, they look like humans but of course, much more beautiful and enchanting and they have their own unique abilities. We get some general overview of what they look like, their abilities, what they eat, how they communicate and very little knowledge of their home planet. I would have preferred more detail about this species as I found most of their origins were glossed over or replaced for a different conversation. I’m hoping that in the sequel there will be far more detail and speculation of what kind of society they have evolved into as well as other random facts of their life AND perhaps the specific reason why they have come to Earth?

The plot moved along alright. There was highschool drama, there was young love drama, new love drama, parent drama, alien drama. Lots of drama! There was also a lot of romance if you hadn’t guessed it already. Skye gets tangled in with Ethan, one of the Celeians, who is obviously different from the others.

Skye’s involvement with Ethan was one of my favourite parts of the story. However, again I could not stop comparing them in my head to Bella and Edward (Twilight). But I think it’s because I was seeing some parallels, they do have some similarities ; Skye is human and gets involved with Ethan, an alien, thus creating a taboo that may cause havoc and chaos since it’s not the ‘norm’. Their energy together reminds me of Bella and Edward’s, the way they are to each other. They both have families or ‘sides’ that are skeptical towards them being together. Skye has a guy ‘friend’ similar to Bella’s Jacob. Anyways..the list goes on. These were just some things I noticed while reading the story and I think if you didn’t mind Twilight then you will probably like this story although, no vampires and werewolves, just beautiful intergalactic aliens – that could have the power to electrocute you if one gets too close… :S

Skeptical on the ending

I’m unsure of whether I liked the ending honestly. I had hopes of it going down a different road then what actually transpired. I’ll still probably read the next book because I’m honestly curious as to what happens. I want so many things to happen for the next book and I hope more specific subjects are explored!!

I’d recommend Colliding Skies to people who like a cute, sci-fi romance type of story. I’d rate it as PG – 13 as there is talk of some mature content but there is no x-rated content or language – or not much anyway. It was a fun read and I enjoyed the romance in it and I think if you just want a more light-hearted sci-fi then this could be for you! Again, Colliding Skies comes out March 6th, 2018!