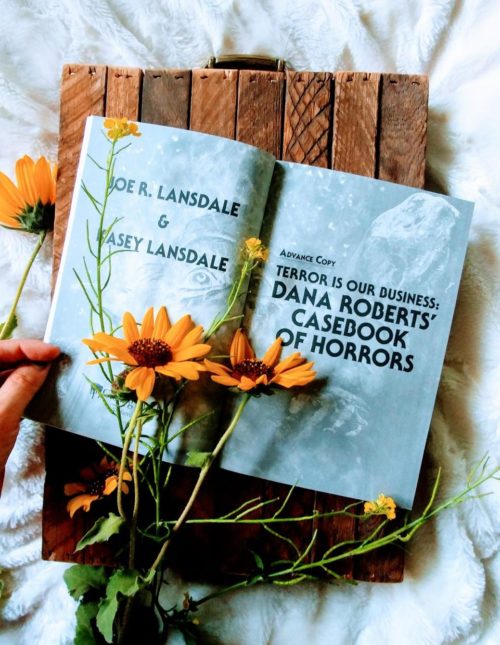 I received Terror Is Our Business: Dana Roberts’ Casebook of Horrors from Smith Publicity earlier this summer in exchange for an honest review. I wasn’t entirely sure what to expect as I have never read Joe Lansdale’s work before and also had no idea that he is a fairly well known and at- large writer in the horror genre, some say ideas are similar to Stephen King’s. I’m so very glad I was given the chance to read this book because what I got from Joe Lansdale and his daughter Kasey was a wonderfully well written collection of short stories featuring Dana Roberts and her somewhat of a sidekick, Jana. Honestly, after the first short story I was definitely hooked!

Terror is Our Business gathers together all of Dana’s and Jana’s previous cases in a single volume, and features an all-new adventure, “The Case of the Ragman’s Anguish,” written exclusively for this collection.

Join Dana and Jana as they investigate—and battle—angry jinns, malevolent shadows, ancient travelers, and soul-sucking shapeshifters. With two tough, resourceful women on the case, the specters from “the other side” won’t know what hit them!

Like I said, I wasn’t sure what to think at first, especially with ‘horror’ in the title – it’s not a genre I generally pursue. However, after reading the first short story, titled – The Case of the Lighthouse Shambler which is an introduction story to Dana Roberts character and just Joe Lansdale’s story I was really pleasantly surprised by how much I enjoyed his writing and the story itself which didn’t end up being very ‘horror’ driven, it was more paranormal and supernatural to me. I was eager to keep reading the rest!

So, Dana Roberts is a character created by Joe Lansdale, who is very much like Sherlock while Jana (Does she have a last name? I don’t know) is a character created by Kasey Lansdale, who is very much like Watson. It even says in a little intro before one of the short stories that they used that famous pair as a basis for their characters. So in this collection of short stories there are tales of Dana Roberts, Supernormal Investigator, on her own as well as a short story of Jana being introduced to the supernatural (or ‘supernormal’) world which leads to her discovery of Dana Roberts.

I love the stories of both ladies on their own, especially Jana’s standalone – it’s real creepy – in a good way! However, having both ladies interact in stories where they are partners is super satisfying. The sarcastic humor and banter between them is so on point. I actually laughed out loud during one of their conversations and that’s usually a GOOD sign that I am falling in love with the writing!

What to compare it to

As I was reading these stories I got vibes from other authors I’ve read and TV shows I’ve watched. To sum that up I think these stories along with their concepts are a good mix between Canadian author Kelley Armstrong’s novels and Netflix’s Stranger Things. I had some goosebumps reading some of the stories because they had concepts that I’m really interested in. For example, in Stranger Things – the parallel universe called ‘The Upside Down’, yeah, there’s something similar in one of these stories and the feeling while reading about it was so haunting!

Every short story was unique. Whether it was Dana’s or Jana’s story, I never felt bored or uninterested in what I was reading and was genuinely interested in the development and characters. I read somewhere that it was a good idea to take a few hours or a day in between each short to give it time to sink in but I was too invested in the writing to wait that long and usually read a couple of stories back to back.

Sometimes I have an issue with short stories too – mostly being just that – they’re too short for my liking. However, I think Joe and Kasey did a wonderful job of writing an enticing and satisfying story with the limited amount of pages they used. So, coming from someone who doesn’t prefer short story collections this rated really high for me!

YES! I would definitely recommend to anyone who likes supernatural or paranormal type of stories. Also, if you like short stories. This was also very action packed and witty. The writing is superb and will leave you wanting Joe and Kasey to collaborate again! I am so thankful that Smith Publicity sent this to me in exchange for a review because I definitely hope to be checking out more of the Lansdale’s work in the future!

Disclaimer** I am an Indigo/Chapters Affiliate, please check out Dana Robert’s Casebook of Horrors here!

More info on the authors

** I found this cool site that recommends where to start with Joe Lansdale’s books, you can check it out here. 🙂

** Kasey is also a well known singer/songwriter as well as being an author, check out her music video, Sorry Ain’t Enough, here!