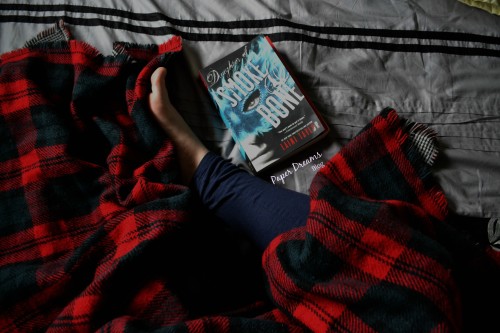 Daughter of Smoke and Bone by Laini Taylor

I bought this book off of Book Outlet without really knowing too much about it. I started it on a whim and WOW, I can’t believe I didn’t start it sooner. The plot absolutely blew me away. Not to mention I’ve never really read a book that focuses on Chimeras. The first time I heard the term was from watching Teen Wolf and I don’t think they did an accurate description compared to this book. Hooray for authors thinking outside of the fantasy box and bringing the less talked about mythical creatures into existence J

Around the world, black handprints are appearing on doorways, scorched there by winged strangers who have crept through a slit in the sky.

In a dark and dusty shop, a devil’s supply of human teeth grown dangerously low.

And in the tangled lanes of Prague, a young art student is about to be caught up in a brutal otherworldly war.

Meet Karou. She fills her sketchbooks with monsters that may or may not be real; she’s prone to disappearing on mysterious “errands”; she speaks many languages—not all of them human; and her bright blue hair actually grows out of her head that color. Who is she? That is the question that haunts her, and she’s about to find out.

When one of the strangers—beautiful, haunted Akiva—fixes his fire-colored eyes on her in an alley in Marrakesh, the result is blood and starlight, secrets unveiled, and a star-crossed love whose roots drink deep of a violent past. But will Karou live to regret learning the truth about herself?

First off, the plot was excellent. It started off a bit slower but then built up into this crazy and mysterious interconnected story that blew your mind with a sense of satisfaction after reading a well written book. I love that Laini Taylor brought a story involving Chimeras into the world. I feel that they are a less talked about mythological creature and in this book there is quite a bit more detail involving their existence- even an interesting little backstory as to how they came to be (for this story).

The setting is pretty important to the story. Karou lives in modern day Prague, well some of the time and can skip around to other parts of the world when she needs to through the door in Elsewhere. Elsewhere is what she calls Brimstone’s ‘office’ as it seems to belong to its own set of rules. Elsewhere is where she learns how to pick apart good and bad teeth from many various species in the human world as they are used for something magical that Karou has not yet been allowed to know about. Another fantastical world is introduced as you delve deeper into the story and will ultimately shatter Karou’s known world.

One character that I am super interested in is Brimstone. Brimstone is Karou’s adopted Chimera father; he’s a little rough around the edges but has deep parental feelings for Karou and I think there could definitely be a whole book dedicated towards his backstory. Well, I’d be interested anyways.

This story is not only told through Karou but also through Akiva and Madrigal. In order to make the story flow as eloquently as it did it needed to be told by all three of these people. In that sense, I felt like this was just a background story as it was about Karou finding out who she was finally and Akiva coming to terms with what happened in his past. The big story is just beginning for Karou in Days of Blood and Starlight (Book # 2).

This story was fairly well written. It flowed nicely. Generally, I’ll take a lot of breaks if it’s not really keeping me interested but I read it in two sittings, it would have been one but I did have to go to sleep at some point. It definitely kept me interested until the very end.

Mystery: 8  *Why the black handprints on the doorways? Why is Akiva so interested in Karou? What is Brimstone hiding? Why is Karou’s background so mysterious??

Romance: 7  *There isn’t as much as I would like but Karou and Akiva are pretty cute.

So, yes, yes, yes! I definitely recommend Daughter of Smoke and Bone! I would rate it as PG- 13 for profanity or sexual content.  This is a great fantasy read that you won’t want to miss out on. It is the first in the series. The other two in the series are now out as well and they are: Days of Blood and Starlight (Book # 2) and Dreams of Gods and Monsters (Book # 3). There is also a novella that is set in between the 2nd and 3rd book called Night of Cake and Puppets. I hope to get my hands on these as soon as possible. Laini Taylor wrote a wonderfully electrifying story that I think everyone should read!! If you have read it, what did you think? If you haven’t, skip on down to the bookstore and grab yourself a copy!

Also, if you were a chimera, what would your body look like? I think I would like some fur. I’m alwaysss cold. I could do with some tiger ears, maybe even a tail? And wings! Yes, wings. That would make traveling so much more convenient.

Until next time, Happy Reading!