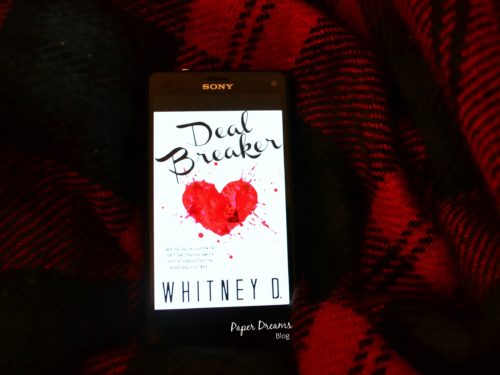 I received Deal Breaker from the author, Whitney D in exchange for an honest review after requesting a copy from reading her synopsis on Instagram. I was intrigued by the storyline and I am a fan of second chance love stories so I thought I’d give it a try.

Once you fall in love for the first time, you give away a piece of yourself that you never really get back…

Sebastian Holt was two years older than me and was the most sought after guy at our high school.

Me? I’m Emery Evans. I’m no one. I’m not popular and I mostly keep to myself. I’m fifteen, a virgin, and have never actually kissed a boy before.

When my best friend, Sophie gets her first real job, we’re surprised to see that Sebastian is one of her co-workers. Our paths eventually collide and I fall quickly. I place my V-card along with my heart in his hands and pray he doesn’t hurt me.

Our relationship escalates quickly and within a matter of months, we’ve fallen head over heels in love with each other.

“I love you.” Those three little words changed my life forever.

When my parents find out what I’ve done, they forbid me to see Sebastian and it inevitably destroys our relationship.

It takes time, but eventually I move on.

Twelve years later, Sebastian and I are unexpectedly brought together again. This time, we’re both five-plus years into crumbling marriages. What happens next is something neither of us ever expected when we’d decided we would be “just friends”.

Deal Breaker is a second chance romance about a girl who gives away her heart to her first love and later realizes that she never really got it back.

My biggest problem with this story was that I didn’t connect with the characters. There wasn’t a lot of backstory with Emery and there was no given reason as to why Sebastian was the “it” guy in high school. It mostly just focused on Emery and Sebastian having passionate, intimate and dirty sexual encounters.

I was SUPER annoyed with Sebastian and his decisions. If he claimed he was soooo “in love” with Emery the first time- why did he let her parents get in the way of banning some of the time they would have together? They could’ve tried to make it work. Especially when he later said that he had never gotten over her and his mistake of letting her go. The conversation between them when it happened really bugged me, like it happened too quick and without much feeling. Then the fact that he married someone because he felt they owed it to each other. One of the worst reasons to marry someone. Like come on. Sebastien never seemed grounded and didn’t make good relationship decisions- like ever. If he was secretly pining for Emery then he should have fought for her! Guh. Stupid boy.

Also, I was interested in Emery’s friend Sophie and would have liked to know more about her. She had some spunk. But sadly most of the side characters were mostly tossed aside due to copious amounts of amazing sex that Emery and Sebastien were having… 😉

On the plus side for those who like short, quick and to the point reads then this is also good for you. It’s also not part of trilogy or series- just a standalone.

Erotica: 10  *It was no Fifty Shades of Grey but Whitney still did a great job of capturing some heated naughty scenes.

Romance:  6  *Some romance from Emery and Sebastien’s earlier years.

Okay, this book was mainly about sex. So I definitely rated it with a big capital R. For mature teens and adults. Again, it’s a standalone and a quick read so it’s nice if you need something to read on the beach or just relaxing in the bath. If I read something like this in public I’m usually all shifty eyed, paranoid that someone is going to catch me reading something naughty, haha. So if you’re like me, read it in the comfort of your own home, or not. Hope you enjoyed this review!