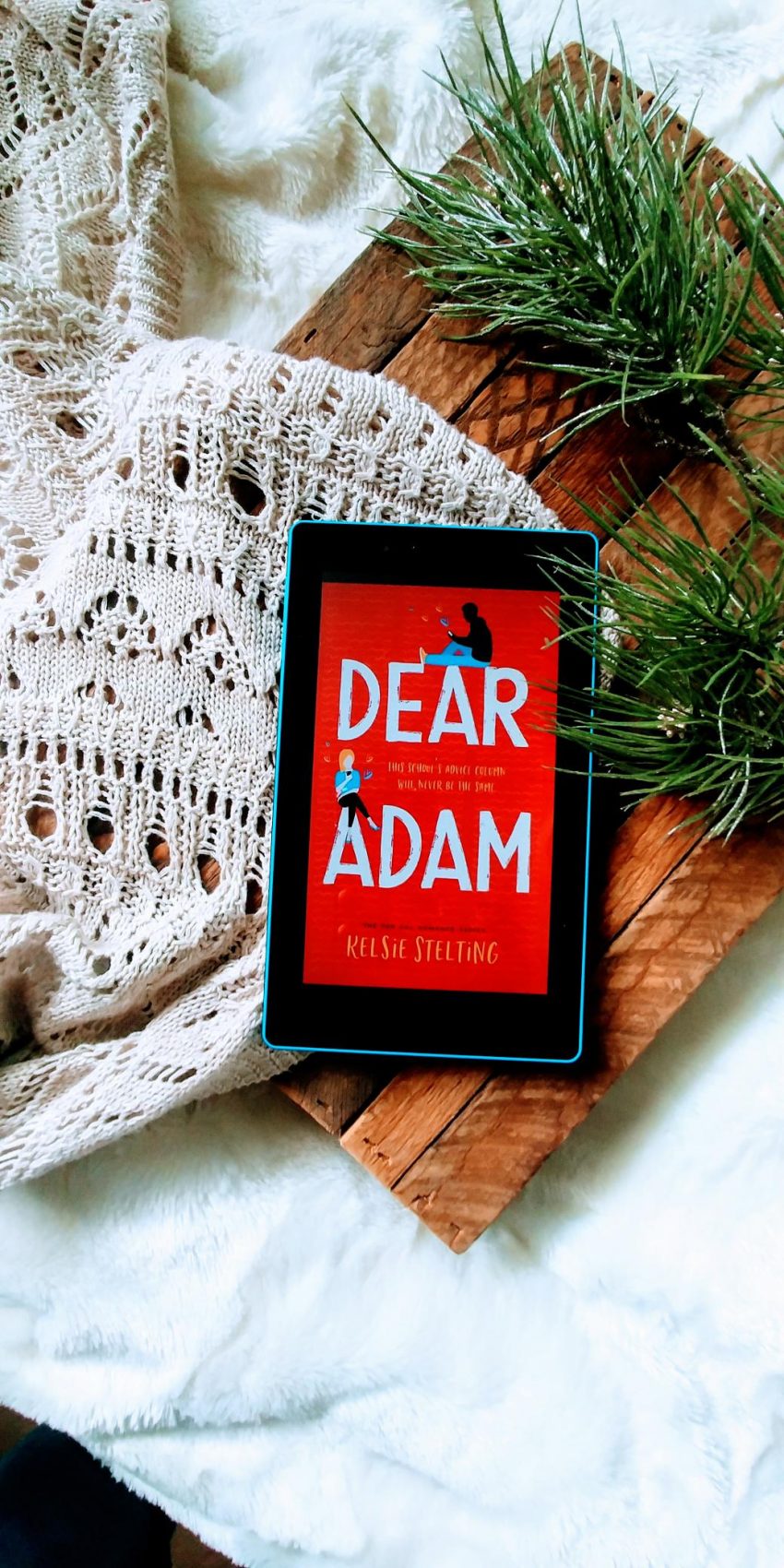 I received Dear Adam as an e-book in exchange for an honest review from Kelsie Stelting. I read the synopsis and it sounded cute and that it would be something I would like and I was not disappointed!

What happens when the bad boy takes over the school advice column?

The last thing Emerick should be doing is giving anyone advice. His dad’s in prison. His mom’s buried under credit card debt. And he’s one step from failing. After everything his mom’s been through, she can’t take another disappointment. So when the guidance counselor gives him a choice, anonymously write the school’s advice column or drop out, what choice does he really have?

Student body president Nora Wilson has the perfect life. At least, that’s what everyone thinks. And with her dad running for governor . . . reputation is everything. She can’t let anyone know she’s drowning under the pressure. Except for an anonymous advice columnist.

Nora and Emerick can’t stand each other in real life. But online? They may have more in common than they ever thought possible.

Start reading Dear Adam in the Pen Pal Romance series today to see whether enemies can really become lovers. Fans of Fangirl by Rainbow Rowell and Dear Aaron by Mariana Zapata will love this sweet young adult romance with a diverse cast of characters that feel real enough to touch.

The trope where people know each other in real life but don’t know each other’s true identity online but connect more on the latter is something that I’ve always been a fan of. Maybe it’s my obsession with You’ve Got Mail but I absolutely adore these kinds of scenarios (except for Catfish, nooo catfishing). So anyways, that’s the basis behind Emerick and Nora’s story. I really like how it was done in this story with Emerick being the student advice columnist for the school’s newspaper (Dear Adam) and Nora writing in to him as “ThePerfectStranger.”

There is something about unloading all your problems or issues onto someone without seeing their face – is it the lack of awkwardness that comes with feeling judged by the other person in person? In any case, this is how Nora lets go of her “perfect” persona and finally lets someone in to see how overwhelmed she is. I get why, she’s put in a situation where everything is analyzed since her dad is running for governor and everything needs to be perfect therefore she cannot slip up. That’s an enormous amount of pressure for a teenager. So her and Emerick bond over being overwhelmed and helping out their parents with their problems.

I really liked Emerick. He was sweet and down to earth. He had good advice for all the kids that wrote in to him. I didn’t really see him as “delinquent” because he wasn’t really. He had a bad reputation because he skipped class to work to help his mom out with bills and maybe cause of his friend “Wolf” that he hung out with. It’s funny how kids associate skipping class with having a bad reputation when what they’re really doing is something that’s really helpful? We can be so incredibly judgmental when we don’t know what’s happening in people’s personal lives.

Okay, just like in You’ve Got Mail I love when the characters start to see that they do have more in common than they thought. My favourite part was when Emerick and Nora had to do a scavenger hunt at the Capitol for their class and they just had fun with each other.

There was Wolf, Emerick’s friend that I really liked. He’s kind of rough and wild but also a good friend and musician. I’d love a story on him!

There’s also Fabio! As soon as he came into the story which was nearly when it was over at a scene for Prom I knew I instantly wanted a story on him. I just liked his quirky humor and wished he had appeared sooner!

So Emerick is “Dear Adam” and something else I enjoyed throughout the story was reading the other letters from side side characters that Emerick would respond to but then it would slowly be revealed who those people were and a little of the aftermath about what happened after they messaged him. It’s like a whole other side story going on in the background that was nicely woven in.

Yes! It was a nice, short contemporary high school romance. I’d rate it PG since it’s fairly clean and funny. Kelsie Stelting has ten other books in the world too that can be checked out! She’s a writer that grew up in western Kansas and loves to “write honest fiction that readers can vacation in.” Check out more of her info –> here