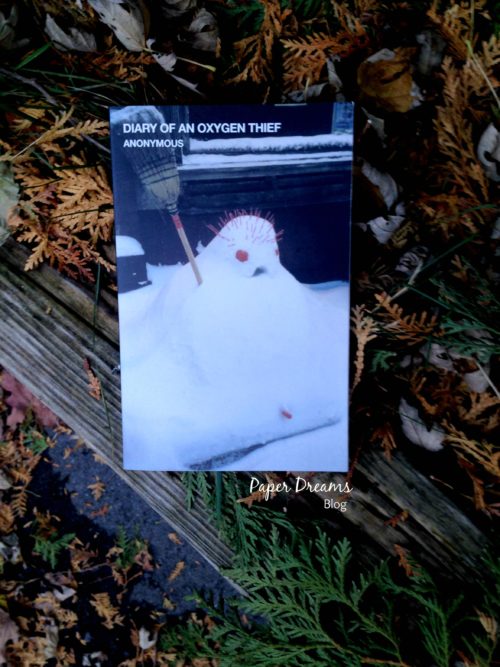 Diary of an Oxygen Thief by Anonymous

I picked this book up purely on a whim. I had seen pictures of the book floating around on Instagram and thought it seemed like it would be interesting especially because the author is Anonymous. It makes it sound more intriguing that way. Well, that and I initially thought that it was by the group Anonymous. Yeah, NOPE. Just an anonymous author. Probably for good reason. This book is pretty shady.

Hurt people hurt people. Say Holden Caulfield was an alcoholic and Lolita was a photographer’s assistant and somehow they met in Bright Lights Big City. He’s blinded by love. She by ambition.

This book is very short, it didn’t long to read it. The synopsis intrigued me but also left me with a bad feeling in my stomach. Hurt people hurt people. Not a fan of this line. It was leading to some psychological or physical mess that I wasn’t sure if I would like. I was initially intrigued because it was about love.

Probably the only thing I liked about this book was the narration. I felt it was its strongest point. Anonymous wrote as if he was in a conversation with you, telling you his inner thoughts and asking the reader questions as if he really was talking to you. He would go off on tangents all the time but somehow they all tied into his story to give you a better idea of the overall image. However, if you think you will like this narrator then you might be sadistic.

I absolutely hate him. And hate is a strong word but I am going to use it here. I don’t know if this guy is actually real or if it’s a story of fiction. God forbid he’s real. He is a privileged Irish prick who preys on girls to hurt mentally and then gets his kicks off of it afterwards. There is never any physical abuse, thank goodness, otherwise I would’ve torn this book to shreds. But still, this guy tells you all about his conquests and how he ensnares and seduces innocent girls to develop feelings for him, even to love him and then when it suits him best, when he sees how far he can really take it, he rips the girls heart out and eats it in front of her. Figuratively, speaking of course. How fucking awful is that? You sir are a sadistic fuck. And the best part? Something similar happens to him later in life and as the reader you are supposed to feel awfully sad and compassionate towards him. No, no, no, no, no, no, NO. I didn’t feel one ounce or shred of empathy for him. AT ALL.

Thoughts on the plot

This is a sick book. I am deeply disturbed at what lengths people go to in order to feel something. I am not naïve to the world, I know there are awful people out there. But this is truly disturbing. I don’t put all the blame on the main character of this book because the girl he writes about that treats him in a similar manner is also a twisted fucked up person. It actually makes me angry just thinking about this, that people could treat each other this way. These are the scum of the earth, the ones who take pleasure in torturing others for their own sick games. I question where their humanity is. To top it off, it’s not just these two characters involved. The girl has a group of friends or colleagues that are also in on it. This makes it even more catastrophic. There’s a sick group of followers involved. Again, if this is based on a real life event I am deeply distressed about the state of humanity. This is not the worst thing that is out there, I know that. But it’s still just as sick and twisted. If this book isn’t based on a real life event, I’m still just as equally distressed about it. I don’t believe it’s a necessary story. This may be a super harsh critique but I mean everything I say, how did this book get published and who had the audacity to say yes to it?

I think you may have already gotten my opinion on this book, quite loud and clear. I wouldn’t recommend it. If you think you might like it based on the disturbing traits and plot I mentioned, well good luck to you. I would rate this 18A, there is explicit language and sexually explicit scenes. If you have read it, what did you think? Did you feel the same way as me or have different thoughts? Let me know in the comment section below!