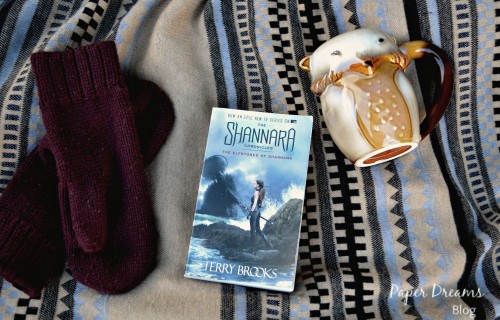 The Shannara Chronicles: The Elfstones of Shannara by Terry Brooks

I bought The Shannara Chronicles: The Elfstones of Shannara mostly because I saw that the TV show was coming out. I wanted to compare the two and see what differences there would be in the plotlines. I’ve watched a few episodes of the TV adaptation and I actually really like it. There are things that they have changed obviously but it still keeps a good base plotline from the original story. Now that I’ve finished the book it’ll be interesting to see how it plays out in the show. Nonetheless, the book was still a fantastic read and very entertaining.

Also, this is actually the second book in the series: The Shannara Chronicles. I didn’t know that until I had already started reading it. Honestly I don’t think you need to read The Sword of Shannara (#1) but if you’re one of those keeners who like to read things in order then go get the first book!

In the far future, unbeknown to humankind, an apocalyptic war is brewing. Fearsome, vengeful Demons rage at the boundaries of the world, held at bay by a spell called the Forbidding. But now that barrier is dying. Evil is beginning to break through. And only the Chosen can banish the Demons back to their realm.
Wil Ohmsford is a healer, not a fighter; a man of duty, not great deeds. But this epic battle seeks him out, for he holds the Elfstones: mysterious protective talismans passed down by his grandfather. Wil is recruited to act as guardian to the Elf girl Amberle, who must venture far to deliver a seed that will help the Forbidding to grow again. The fate of civilization rests upon her shoulders—and the completion of her mission rests upon Wil’s. Now, as the forces of darkness descend, Wil and Amberle embark on a perilous journey, placing their faith in each other to survive the bloodthirsty terrors that await.

Before you begin to read this story you should know that Terry Brooks likes to focus on the war aspect of his story. He writes a lot of action/fight scenes between different beasts. Though there are a lot of these scenes, Mr. Brooks writes them well, showcasing a lot of his talent. His writing is also very descriptive, not just in action scenes but in expressing detail to Wil and Amberle’s surroundings. He describes what the weather is like for certain scenes and will include descriptions on what flowers or trees are around that area. He does just the right amount of description so that it is not overbearing but compliments the written dialogue between characters.

This story is also written from multiple points of views. Most of the time you are reading from Wil’s point of view but other times you are reading from Amberle’s, or Ander (Amberle’s uncle) or Allanon (the powerful Druid). This created better diversity and enhanced the plotline.

Wil was a very interesting character. I’m still 50/50 on whether I really liked his character or not. I think I would have liked him more but I found that I never really had a personal connection with Wil’s character. Wil is half elf, half human. His human side plays out all of his faults. He is supposed to be seen as a hero but often, as the reader I was shaking my head at how naïve and sometimes stupid he was. It was also good though because then he wasn’t this all powerful hero who didn’t make any mistakes, but instead learned from them…in a slow way.

I never really connected with Amberle and Wil’s relationship either. There just wasn’t enough written dialogue to make me really love them. Especially as Amberle was often described as being small and looking like a child. It seemed a bit weird to me. Thankfully the TV adaptation makes up for this.

What really interested me was that the setting of this book is supposed to be in the far future. Yet there are elves, dwarves, trolls and gnomes inhabiting the land with the men. So, like how far in the future? Sounds pretty cool to me. Except for the demons part, I’m okay without those.

Action/ Adventure:  10  **Major battle scenes and lots of travelling between areas of the realm.

Fantasy: 10  **Yup, get ready for a lot of beasts, demons, and a few unique characters I don’t want to give away.

The ending really surprised me though. I wonder if the TV adaptation will have the same ending? Hmmm. Anyways, I recommend this to anyone who loves fantasy and a lot of action. If you like battle scenes and a sprinkle of romance thrown in, definitely give it a try. The storyline is really unique and showcased Terry Brook’s talents. Again, this is part of a series. The Sword of Shannara is the first book and The Wishsong of Shannara follows this one. Please let me know what you think of my review, if you had similar feelings about any of it or not!