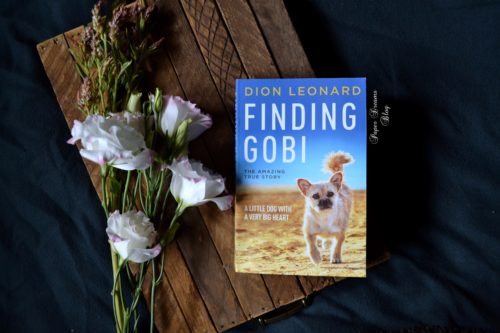 I don’t normally read non- fiction but I recently bought Finding Gobi because I had heard the author, Dion Leonard on CBC’s radio show one day at work. Hearing him talk about his journey and Gobi really made me want to buy his book and read it so I finally did!

You can listen to the podcast here.

Finding Gobi is the miraculous tale of Dion Leonard, a seasoned ultramarathon runner who crosses paths with a stray dog while competing in a 155-mile race through the Gobi Desert in China. The lovable pup, who would later earn the name Gobi, proved that what she lacked in size, she more than made up for in heart, as she went step for step with Dion over the Tian Shan Mountains, across massive sand dunes, through yurt villages and the black sands of the Gobi Desert, keeping pace with him for 77 miles.

As Dion witnessed the incredible determination and heart of this small animal, he found his own heart undergoing a change as well.  Whereas in the past these races were all about winning and being the best, his goal now was to make sure he and Gobi’s friendship continued well after the finish line.  He found himself letting Gobi sleep in his tent at night, giving her food and water out of his own limited supply, and carrying her across numerous rivers, even when he knew it would mean putting him behind in the race, or worse, prevent him from finishing at all.

Although Dion did not cross the finish line first, he felt he had won something even greater – a new outlook on life and a new friend that he planned on bringing home as soon as arrangements were made.  However, before he could take her home, Gobi went missing in the sprawling Chinese city where she was being kept. Dion, with the help of strangers and a viral outpouring of assistance on the internet, set out to track her down, and reunite forever with the amazing animal that changed his life and proved to him and the world that miracles are possible.

Being a memoir book about how someone found a dog that would ultimately change their life, I knew I would love it. What surprised me was the easy flow of Dion Leonard’s writing voice and how he drew you to his and Gobi’s story but also to parts of himself that you can tell he’s never shared with many people. He’s very concise about his retelling of events in the Gobi Desert and his running adventures but draws you to him as he writes about his childhood and family dilemmas which have shaped him into who he is… at least before he met Gobi. 😉

I don’t have much criticism for this book other than the fact that I would have loved more! I felt like I was pulled into Dion’s life and being a somewhat runner myself, I would have loved to hear more about his other running treks. I found the parts of him recounting his routine before he goes for the run and the dynamics of the runners within a long distance race very interesting and intriguing. Also, since his wife is also a runner, I think it would be super cool if they wrote a book together with alternating points of view of their routines and experiences in their ultra marathons. Just a thought! 😉

The book also features a few photos near the end of the book. I love that they did this! Putting faces to the names of the people who helped Dion and Gobi was neat after hearing about them all.

I think there are also some really interesting topics that came about while Dion was writing his story; being that a large part of this book is adventures within China and interacting with the people and their culture there are interesting tidbits about what life is like there. Two that stood out for me while I was reading this were; overpopulation of stray dogs and misconceptions of people in China. The overpopulation of stray dogs is not something new and is something many countries are trying to deal with. Gobi happens to be a stray dog who captures someone’s heart and so ensues the long and brutal legal battles of bringing that stray dog home. Dion writes about his own perceptions of what he thinks he knows about the Chinese people but after much time spent among friends he made regardless of language barriers he came to a new conclusion and reformed his earlier judgement. This was just another aspect of the book that I enjoyed and really added to the feel good-ness of the story.

I can assure you that this is a feel good story but it doesn’t come without its trials. I recommend this to anyone who would love to read about a little stray dog from China capturing the heart of a runner from Scotland and what that love can endure. You will fall in love with Gobi and Dion’s adventure!