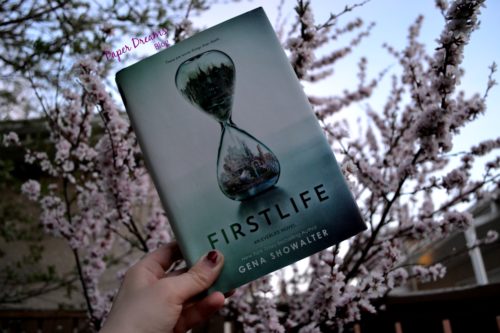 I bought this book mostly on a whim. I had read the synopsis and found the storyline intriguing and then found the book being hyped up on Instagram so I thought what the heck I’ll see how it is.

Tenley “Ten” Lockwood is an average seventeen-year-old girl…who has spent the past thirteen months locked inside the Prynne Asylum. The reason? Not her obsession with numbers, but her refusal to let her parents choose where she’ll live—after she dies.

There is an eternal truth most of the world has come to accept: Firstlife is merely a dress rehearsal, and real life begins after death.

In the Everlife, two realms are in power: Troika and Myriad, longtime enemies and deadly rivals. Both will do anything to recruit Ten, including sending their top Laborers to lure her to their side. Soon, Ten finds herself on the run, caught in a wild tug-of-war between the two realms who will do anything to win the right to her soul. Who can she trust? And what if the realm she’s drawn to isn’t home to the boy she’s falling for? She just has to stay alive long enough to make a decision…

In all honesty I did not love this book and the characters bothered me a lot. However, the basis of the storyline was what intrigued me most. The battle between Troika and Myriad reminded me of the “battle” between Heaven and Hell. Troika’s beliefs are of honesty, decency and that first life has importance while Myriad believes in recklessness, unruliness and that everlife is far more imperative than first life. Troika is explained as being full of light and very peaceful for the spirit while Myriad is portrayed as being dark and full of lust and passion for the spirit. Archer from Troika and Killian from Myriad are almost like the little angel and devil icons that sit on your shoulder. They are the top labourers from their realm and both are trying to get Ten to sign herself over to their realms.

Ten, the main character was what bothered me the most about this novel. In the beginning of the story you find out that she is in an asylum for teenagers who are undecided with whom to sign with and are thus punished and even tortured until they make a decision. Ten’s parents had sent her there because she was disobeying and disappointing them by not signing with Myriad. But this is Ten’s biggest issue- she doesn’t want to choose her Everlife based on what her parents want for her or from whatever deal they’ve made and the fact that it seems like each side exaggerates their pros, Ten can’t decide who is worthy of her choice. She feels so strongly about her indecision at the asylum and endures torture and bullying to the point where anyone would break and just choose a side. Tenley doesn’t break though, reflecting her strong spirit. However, as the story goes on and as she gets closer to Killian (labourer from Myriad) and feels closer to him she loses some of that strength in her indecision. I liked that she was so badass at the beginning and defying all these crazy expectations of her but then throughout the middle and the ending she turned into this whiny and annoying girl who couldn’t seem to do anything or make a decision without knowing Killian or even Archer were around to help back her up. That killed me. She was a strong, independent woman…why ruin that?

I do not like when characters fall in love within two minutes of meeting one another. I need some build up. And if the guy does seem to empower the heroine of the story then it turns me off even more. As I previously stated, in this case, she became less empowered the more in love she thinks she is.

One last thing that bothered me. The DIALOGUE. I cannot stress this enough. If there isn’t interesting, thought- provoking even passionate dialogue between characters for a story that focuses highly on this aspect then that tanks the novel right there. I just felt it was very choppy and often very cheesy. This is something I hope the author will improve on for her next novel.

I’m unsure of the time period of when this story takes place but since it is loosely based off our world, I would say the not too far future. As to where some of the scenes take place in the first life, I would suggest somewhere like North America.

I think my previous critiques explain how I feel about my recommendation of this book. I want to be honest. I don’t mean to hurt the authors’ feelings in anyway but I’m not going to gush about a book that I don’t feel overly excited about and felt had some flaws with its storytelling. I would rate this book at a PG- 13. There is some sexual content but it is not erotically detailed. This book is not a standalone- it’s the first of the series. I haven’t decided yet whether I will pick up the second or not. I hope this review was helpful and assisted in your decision on whether this book is for you or not.

Until next time, Happy Reading!