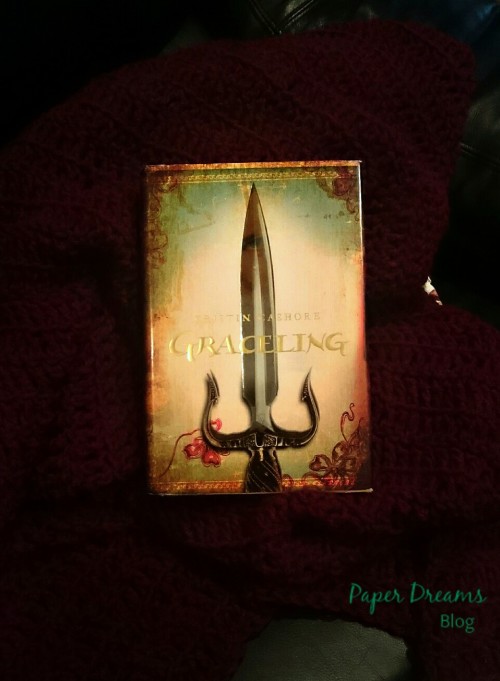 Honestly, where do I even begin with this one? I first read Graceling ages ago, before I really got into otherworld stories and I feel like it is still such a hidden gem so I want to shed some light on it. I have recommended this book to so many friends over the past few years and no one has disliked it. Graceling is one of my favourite books hands down.

This is a story of Lady Katsa, who lives under the command of her Uncle Randa, King of the Middluns, exploited for her Grace. Katsa among few other people in their realm are born with a Grace- known as an extreme skill and are marked as such by being born with two different colored eyes. Katsa’s is the Grace of killing, one she is not proud of. However, something unsettling occurs in the realm that leads Katsa to meet Prince Po, from Lienid, who is Graced with combat skills. Together they set out to save their realm from a mysterious evil, while learning more about themselves and each other than they could have imagined.

I love stories that are made up entirely in another world! It means the author had to put just that much extra thought into creating a unique plot line. Also, it comes with a map! I love maps 🙂 At the beginning of the book you will see the map that shows where Katsa, Po and others are from and so you can kind of get an idea of what their journey was like and where they were travelling to. It’s unclear of exactly when this story would have taken place but relating it to our history because of the atmosphere of the era (of many kings, serving girls, dungeons) it may have been around the 1400- 1500’s is my guess. I am no history major though so if you think it may be a different time, let me know!

Katsa is a unique character. She is strong willed and determined yet empathetic when needed. She claims right from the beginning that she will never marry. And it’s not that she isn’t fancied but there’s a part of her that believes that she is a monster because of her Grace that couldn’t be loved. She is ordered to do torturous and brutal acts for her Uncle and a reputation has proceeded her. She is very loyal to her friends and her family that don’t use her for her Grace. I understand why she wouldn’t want to get close to anyone for fear of disgust of her uniqueness but I was drawn to her characters mindset; reluctant to the idea of marriage, to the very idea of love until she meets Prince Po… who is very sweet and understanding of Katsa. Katsa is a fierce female lead and definitely a prominent book role model.

Katsa and Po’s Grace’s are very intriguing and play integral parts to the story. I was drawn to the fact that this world wasn’t exactly magical but instead focused on enhanced skills people would have that made them desirable and attainable. I don’t want to give away anything from the story but some of the Grace’s in the plot are seen in today’s society in various multitudes. It is Katsa’s Grace, perhaps one of the coolest Grace’s actually, that will save her. If you read it, you’ll see why 🙂

There is nothing I didn’t love about Graceling. This story is wonderfully written with many twists and turns you wouldn’t have expected. If there is one message I would take away from this story it’s that it capitalizes on the power of spoken word. And you have to read the story to find out why I say this! 🙂

Romance: 8  **Okay, when the MC says they are totally against romance, you have to see the  challenge in that.

Mystery: 9  **Actually quite a bit of mystery here. You have to read to find out!

Action/Adventure: 10  **YES!! Lots of action scenes here. It’s a good fix. You’ll enjoy Katsa and Po’s matches and the adventure they go on to save the realm! 🙂

I recommend this book to older teens and up. There is some mature content described in some detail. If you love a good romance with a strong female lead then this a good story for you. This story also has so much more than just romance in it. Lots of adventure, defiance, manipulation, loyalty, and character development. Seriously, add this to your TBR pile if you haven’t already! And if you DO love it, don’t despair, there’s more to take in from Kristin Cashore’s world- Fire and Bitterblue are also books in this series. You could read Fire and Graceling interchangeably but read Bitterblue last. I am still holding out for Cashore to bring more of the Graceling world to my hands. 🙂 Just a thought.. if you had a Grace what would yours be?

Thanks for reading! Leave any comments you have below!

This could be Po’s castle? 😉