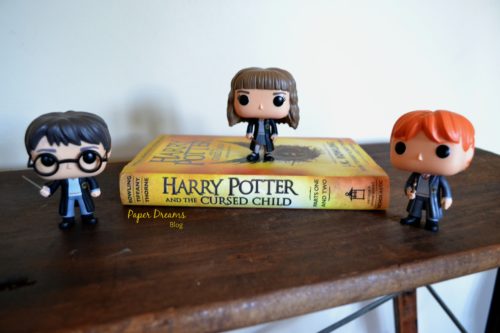 Unfortunately, I was not able to attend a midnight release party for this book as my sister went into labor the evening of! Pretty crazy. So I went and bought it a couple days after. I, among thousands of other Potter fans was pretty excited to get this into my hands regardless of it being in script format. I honestly didn’t really know what to expect since it wasn’t technically just J.K. Rowling’s writing but I knew it would still be neat to read and the chance to go back to Hogwarts is always fun 🙂

Based on an original new story by J.K. Rowling, Jack Thorne and John Tiffany, a new play by Jack Thorne, Harry Potter and the Cursed Child is the eighth story in the Harry Potter series and the first official Harry Potter story to be presented on stage. The play will receive its world premiere in London’s West End on July 30, 2016.

It was always difficult being Harry Potter and it isn’t much easier now that he is an overworked employee of the Ministry of Magic, a husband and father of three school-age children.

While Harry grapples with a past that refuses to stay where it belongs, his youngest son Albus must struggle with the weight of a family legacy he never wanted. As past and present fuse ominously, both father and son learn the uncomfortable truth: sometimes, darkness comes from unexpected places.

So obviously there are going to be some differences between this script vs. all of the other 7 books. I have read many reviews of people saying they didn’t like this “8th installment” because it didn’t flow well with the rest of the series. Parts of this I agree with. One thing that really bothered me was the characterization. Ron would say and do things that were un-Ron like. The same with Hermione and Harry. But I felt Ron and Hermione had the most characterization flaws. And perhaps that’s what really threw people off because then it didn’t feel like the characters were at all the same but some twisted version of themselves. I have read various comments from other people saying it flowed more like fanfiction because of this factor. But if it were truly fanfiction I think we would have a lot more scandalous behaviour that we’ve all been waiting for between Ron and Hermione, ya know what I mean? I’d still be okay with that, though. 😉

Well, Harry was Harry. I didn’t feel like I had as much of a problem with him as I did with his friends. There were times when he was a bit sour and you’re thinking, why? But honestly when I think about it and all the things Harry has been through, regardless of his happy ending in the 7th book, there was still a lot of traumatizing shit that happened to him throughout the years and that will affect him mentally forever. So, yes while a happy, cheerful Harry may be the answer, it is also not very realistic. You can’t expect him to be a normal human being after all that he has faced. Expect him to be a little depressing, a little sour.

What is this really about?

What I was most excited about was reading more from the kid’s perspectives and learning more about them. This I did enjoy! I felt it was appropriate to portray that one of Harry’s children would have difficulties with Harry’s past, we can’t expect them all to blindly believe it was all for the greater good. I liked that Albus Severus questioned his father’s morals and actions. It gave this story and a reflection of what happened to Harry a bit of a deeper meaning behind it. The struggle that Harry and Albus have with eachother was fantastic character building. Poor Harry- he really didn’t know how to handle Albus.

Albus Severus is the main character of this story, not Harry. And since I have never read J.K. Rowling’s personal written experiences about him before I have nothing to compare his characterization to anything else. So to me right now, this is who he is. Albus grows up having conflictions about his father’s past and agonizing over getting into Gryffindor House. But most importantly, he is BEST FRIENDS with Draco Malfoy’s son – Scorpius. Who would of thought? I mean it’s kind of neat when you think about it since Harry had the opportunity to become friends with Draco and his group in his 1st year but didn’t and now Albus is in with that group, although they do not face the same dynamics that Harry and Draco did.

My favourite side character is Scorpius. I thought he was freaking fantastic. He is very different from Draco and in a way, you see a side that could have been Draco if he hadn’t grown up in the circumstances that he did. He is definitely the peanut butter that keeps this sandwich of a story together. He is funny and heartfelt and a true friend to Albus.

Scorpius loves Albus in just a “friendly manner” we are consistently reminded of. There is a lot of backlash about this as Scorpius shows his affection towards Albus in what seems like more than a friendly manner but really who would honestly care if they were gay? Not me. But again we are constantly reminded that Scorpius has a crush on Rose- Ron and Hermione’s daughter. Aside from internet bashing about this topic I would rather people be reminded that they are just (fiction) children still and are sorting out who they are to themselves and shouldn’t need to focus on romantic relationships just yet.

I also really really enjoyed the plot of the play! I thought it was fantastic. I don’t want to give anything away but I thought the writers did a really good job of providing a new and exciting storyline that connected Harry’s past with his future and wrapping it all into one. The play doesn’t focus a lot on the magic side of things but more so on the characters. That’s fine, we did have 7 previous books that were magic filled.

Another major difference is that because it’s a play, it’s a very fast read. Lots of my friends have read it in a few hours or so. While this may seem like a flaw to some who are used to long 600 page novels from J.K. Rowling there are some perks to this shorter story. Of course, it’s not as savory because it’s so short but it also gets to the point quicker and you get your fix a little bit faster. Is this a pro? Up to you.

Action/Adventure: 8  *A new story so of course new adventure!

Fantasy: 8  *There is still some Hogwarts with witchcraft and wizardry at play. J

Let me explain my rating. You have to know going into this script that it’s just not going to be the same. Different writers. Different characters they’re focusing on. I won’t say that I loved Harry Potter and the Cursed Child but I didn’t hate it either. I appreciated the new outlook on the Harry Potter world and I’m very grateful that someone else took a chance and leapt into it while knowing that they would have a lot to live up to. I think John Tiffany and Scott Thorne did a great job at writing the play and the story concepts but my low rating will be because of my disappointment with the characterizations.

If you’re a big Potter fan then I still recommend The Cursed Child. It’s still another piece to the phenomenon but I wouldn’t say they could call it directly the “8th installment”. It felt more like fanfiction and that’s fine. I just hope the play lives up to it. If I had the chance I would still definitely go see it! If you have read Harry Potter and the Cursed Child, what did you think? Do you think it’s the 8th installment we’ve all been waiting for? What was your favourite part? Let me know in the comments below!! I love hearing feedback 🙂 Also, if you’d like to have a more in depth conversation about this story, please shoot me an email! I would love to chat!