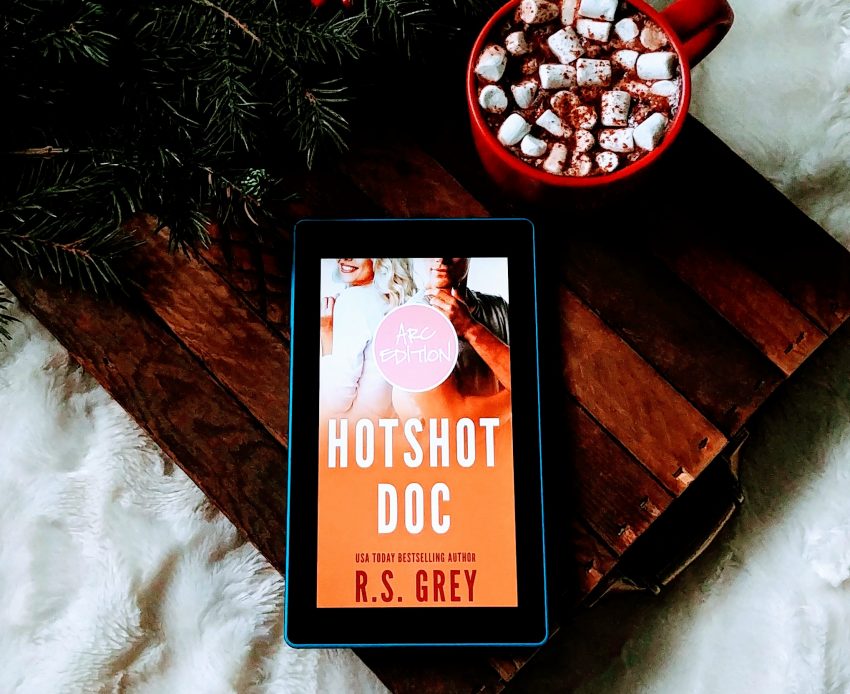 Hello! I was recently sent HotShot Doc by R.S. Grey and her team in exchange for an honest review! HotShot Doc is, I believe Grey’s 18th book!! I stumbled across her Instagram account earlier this year and followed her and then purchased a book -The Foxe and The Hound which I absolutely loved so I’ve been an avid fan of hers since! Anything You Can Do is one of my TOP books by her that I really enjoyed this year as well. Anyways, HotShot Doc is a standalone romantic comedy that has a Grey’s Anatomy vibe and is sure to hit you in the feels too!

Dr. Russell has a bad reputation around our hospital. The scrub techs say he’s cold-blooded, the nurses say he’s too cocky for his own good, and the residents say he’s the best surgeon in the world—really, just a swell guy!—on the off chance he’s within earshot.

I try to avoid him and his temper at all costs. It’s just as easy to admire his sexy, grip-it-while-he’s ravishing-you hair and chiseled jaw from a healthy distance, preferably from the other end of the hallway half-hidden behind a plant.

Unfortunately, my plan crumbles when my trusty ol’ boss decides to swap his white coat for a Hawaiian shirt. His retirement leaves me with two terrible options: switch specialties and spend months retraining, or take an open position as Dr. Russell’s surgical assistant.

That means I have to stand near him in the OR for hours on end and anticipate his every need without letting his biting words and bad attitude intimidate me. Oh, and as if that’s not difficult enough, my silly crush on him—the one I’ve tried to stomp on until it disappears—might just be reciprocated.

I take my job seriously. There will be no smoldering bedroom eyes across the operating table, no angry almost-kisses in the storage closet. (Well, no more of those.)

What’s the phrase? An apple a day keeps the doctor away?
Maybe I should go for a whole damn bushel.

I really enjoyed Bailey’s character. She was smart and sassy. Also super responsible as she takes on a parental role for her little sister like a champ!

Matt was my favourite character. He played the brooding surgeon really well but when Bailey enters his life, he’s not as hostile and a little bit more endearing.

The story is also told from both Bailey and Matt’s point of view, which was so great!! I wanted to know what was going on in Matt’s head, hehe.

And shoutout to Bailey’s fourteen year old sister Josie for pulling Bailey out of her dating rut and being a good wing- woman! She’s spunky and not afraid to be honest to her sister or Matt. Also a fellow bookworm!

Okay, so yes, it’s mostly set in a hospital. Bailey is a surgical assistant and Matt is a surgeon. I haven’t watched Grey’s Anatomy (other than a few episodes here and there, I don’t watch a lot of doctor shows!) but from what I gathered the feel was definitely like a Grey’s Anatomy plot line. There are a few scenes where they are operating but Grey doesn’t write any horrific details to do with the actual operation which I’m thankful for as I don’t do well with those scenes. It’s more easygoing with banter between Bailey and Matt and a focus on the tension between them as well as Bailey being a bit of a klutz.

Cue the Christmas music! There is some lead up to Christmas so that was kind of nice to read during this time of the year! It’s not the sole focus of the time in the novel so I wouldn’t classify it as a Christmas book but just that it has some Christmas vibes.

This is a funny, easygoing story with A LOT of sexual tension which is most probably my favourite part. Honestly, I stayed up wayyy too late reading this in nearly one sitting just so I could get MORE. Grey really knows how to build it up and knock it out of the park. I wouldn’t classify it as a slow burn more that the pacing was just right. I also really enjoyed the whole set up with Matt’s brother and how that played out, made me laugh.

Speaking of Matt’s brother – who we meet for a hot second in the beginning of the book. Can we have a spin off about him? I would really like to know what happened with him!

YES! If you love romance and are in the mood for a swoon-worthy, sassy banter full of sexual tension kind of story then this one is for you! Bailey and Matt are fun characters and provide a good laugh. This is definitely one of my top R.S. Grey books! Keep in mind that it is rated R for sexual content (but well worth it!)