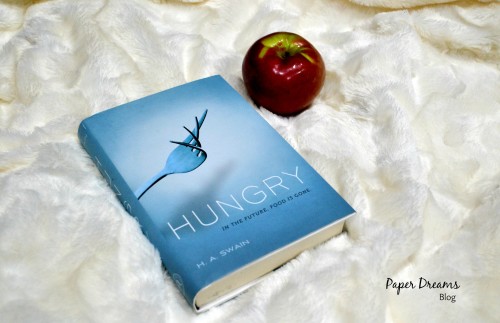 I came across Hungry on Book Outlet when I was ordering my Boxing Day special (and you should also check it out as they have fabulous books at really decent prices!!) This is a science fiction novel set in the not too far future dealing with a corporate and capitalistic society that has eliminated the need to grow and produce food. It was a really interesting read and I quite liked it from being a random pick.

In the future, food is no longer necessary—until Thalia begins to feel something unfamiliar and uncomfortable. She’s hungry.

In Thalia’s world, there is no need for food—everyone takes medication (or “inocs”) to ward off hunger. It should mean there is no more famine, no more obesity, no more food-related illnesses, and no more war. At least that’s what her parents, who work for the company that developed the inocs, say. But when Thalia meets a boy who is part of an underground movement to bring food back, she realizes that most people live a life much different from hers. Worse, Thalia is starting to feel hunger, and so is he—the inocs aren’t working. Together they set out to find the only thing that will quell their hunger: real food

H.A. Swain delivers an adventure that is both epic and fast-paced. Get ready to be Hungry.

I LOVED the concept and premise of this story. It was different from anything I’ve read before. Thalia’s society no longer needs food to survive, they have bottles of a syrup like base called “Synthamil” that’s filled with all the nutrients their bodies need. At least, the privileged do. And it worked for Thalia until she wakes up with her stomach making strange sounds that her grandma identifies as being hungry. Because the growing of food is such a critical issue right now I can see why the simplicity of creating a serum for nutrients and vitamins for the body is more ideal than the current system. It was still interesting that even though there was a base for the serum there was still distinction between the classes of people as to whether they got the extra nutrients they needed and how much. Thalia’s mother, who is a distinguished scientist and created the serum, is able to alter the serum based on Thalia’s body and what she specifically needs. Oh, and get this! The serum also alters the teen’s hormones so they don’t experience cravings for intimacy or sex, thus prolonging their productivity until they are older to enter the ‘Procreation Pool.’ So, since the synthamil doesn’t seem to be working on Thalia, guess what is also bugging her? 😉

Some of the names that came up in this story were pretty ironic. Thalia’s last name is Apple. She meets a boy named Basil and upon meeting each other he continues to call her Apple throughout the book. I thought it was kind of quirky that Swain incorporated names of food with her characters.

The story is all told from Thalia’s perspective. She is a bit of a rebel from the get- go on how her privileged society lives. Besides, the no food there has been major technological development which encompasses the privileges lives, little cams called ‘gizmos’ that they can use for everything from playing games and making calls to monitoring their health. Thalia is tired of being bombarded by technology though, she’s a small time hacker that’s part of a hidden group called “the Dynasaurs” who try and infiltrate new games and programs that come out. This aspect of her was really fun and I enjoyed that she wanted to learn how to knit from her grandma rather than go out with friends so that they could sit on their ‘gizmos’ in front of each other while not acknowledging one another. Her world is very connected yet the social awkwardness from not having proper social skills is very apparent. Everyone has a screen in front of their face and can’t be bothered to spend any quality time with one another. Sadly this is becoming even truer for today’s society as well. Swain focuses on the food and technological issues and enhances them on a larger scale in her world.

This book is written in three parts following Thalia and Basil’s wild adventure to find real food. I enjoyed the first two parts but wasn’t so keen on the third part. This book seems to be standalone but I definitely think there is room for a sequel and I hope H.A. Swain will write another part to Thalia and Basil’s story!

H.A. Swain or Heather Swain is from Brooklyn, New York and loves to craft as well as write stories. You can find her website here.

Science Fiction: 8 *Future world that’s closely related to ours. Pretty interesting and dangerously predictable to where we may be headed?

I would definitely recommend this book to older teens and up! It has a really interesting plot filled with relate-able concepts that might not be too far in our future. I wasn’t a huge fan of the last part of the book but I definitely think it deserves a sequel. I hope you enjoyed my review and will consider checking this story out! If your name was a food, what would it be? Mine would be Raspberry 😉