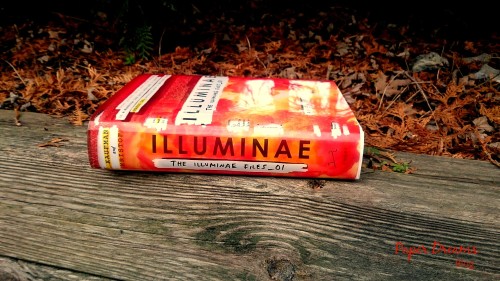 So honestly I picked Illuminae up because I saw a lot of hype about it on Instagram from my book loving friends and thought that it must be a pretty good read if everyone is posting about it. So I skipped along to the book store and picked it up without really looking at it. Came home and started to read it when I realized: NO. I should’ve actually looked at it harder. I generally dislike books that are written in an emails or letter format. That’s what this book is: a compilation of an event based on briefing notes, emails, file reports and so on. But do not digress! This is a pretty positive review. Read on…

The year is 2575. Kady Grant just broke up with her boyfriend…ex-boyfriend, Ezra Mason and thought that would be the worst part of her day until her planet is attacked ensuing into an intergalactic war. She ends up rescuing Ezra and they are shuttled off to different fleets that take off into the space abyss. Artificial Intelligence is part of their fleet that is supposed to protect them and the captains soon come to realize that AIDAN: the AI might actually be their enemy and trying to destroy them when it overrides its limitations and fires on one of their rescued fleets. Kady is a hacker and finds out that something sinister is happening within the lies and secrets between the ships. Of course she has to enlist Ezra for help as he is on the very ship that the deadly secrets are being kept. What they uncover is just pure evil. Kady takes it upon herself to save her people, with a little help along the way…

Let’s talk about Artificial Intelligence here. At first I thought it was going to be another I, Robot cliché. You know, human creates artificial intelligence to help humankind but then it backfires because the AI believes it knows best for humankind, then some sort of destruction ensues. This does happen… Until it didn’t. I really like how they played up the AI: AIDAN in this story. I always referred to it as a he. AIDAN was really smart yet manipulative in ways you wouldn’t have guessed. The authors made him seem like he was trying very hard to be human but knowing that he was also AI. Anyways, I liked AIDAN and how he was his own character in the story.

If you are like me and don’t like books that are written in the format that this book is I’m still going to tell you to give this one a chance. It took me awhile to get into it. But once I was in the thick of it I was amazed at how well I was following and how well it flowed. Not to mention the authors did some interesting pages throughout the story that had pictures or text floating and spiralling on the page to give it whatever feel it needed from the plot. It was very creative.

I also love lOVe LOVE futuristic books. I mean who knows what the future holds so you can pretty much talk about anything here. This story has everything from space features such as wormholes and cool space ships to deadly viruses and hacker love. I appreciate creative thinking towards a future world.

Let’s not forget that this book (and start of a trilogy) is a collaboration between two equally talented authors! Amie Kaufman is an Australian young adult author who has won many awards for her written works. She also graduated with degrees in history, literature and law, and a master’s degree in conflict resolution! A pretty smart lady who also loves travelling, chocolate and has a rescue dog named Jack. You can find more about her and her books at her website here! Jay Kristoff also lives in Australia and has written fantasy and sci- fi novels that have been nominated for awards. If you read his bio he sounds like a very quirky man. He calls himself the Literary Giant as he is 6’7 and claims that he doesn’t believe in happy endings. He also has a very lazy Jack Russell. You can find more about his work here! Both of these Aussie authors collaborated extremely well with Illuminae and I hope to check out more of their individual and collaborative work in the near future!

Horror: 5  **There is a tad bit that is cringe worthy but not overbearing.

Romance: 7  **It wasn’t the main focus but definitely played a big part!

Action/Adventure: 8  **Plenty of that here, all documented 😉

I recommend this book to older teens and up. There is some content that may be a bit mature. Again, be forewarned that it is not written page to page like a regular novel but rather a compilation of notes, emails and instant messaging. A very interesting read though. It is the first book of a series! AND I just found out that film rights have been picked up by Warner Bros and BRAD PITT. You can read about it here. So, get reading before the movie comes out!! What did you think about this story? The written format, the characters, plotline? Let me know in the comments below!