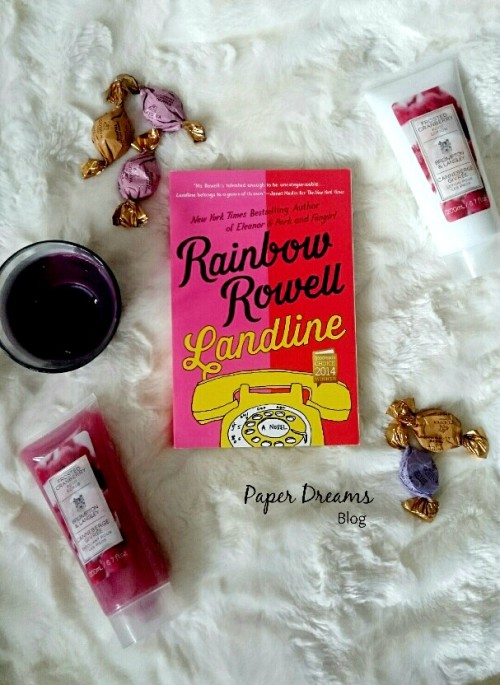 I received Landline as a Christmas gift and finally got around to reading it. I only put it down as I had to get some sleep to function the next day but seriously I LOVED it. It made me laugh, it made me cry. One of the best romance novels I’ve read in awhile. And since Valentines Day is not too far away, this a great novel to get you into the romantic spirit. Seriously.

Georgie McCool knows her marriage is in trouble. That it’s been in trouble for a long time. She still loves her husband, Neal, and Neal still loves her, deeply — but that almost seems besides the point now.
Maybe that was always besides the point.
Two days before they’re supposed to visit Neal’s family in Omaha for Christmas, Georgie tells Neal that she can’t go. She’s a TV writer, and something’s come up on her show; she has to stay in Los Angeles. She knows that Neal will be upset with her — Neal is always a little upset with Georgie — but she doesn’t expect to him to pack up the kids and go home without her.
When her husband and the kids leave for the airport, Georgie wonders if she’s finally done it. If she’s ruined everything.
That night, Georgie discovers a way to communicate with Neal in the past. It’s not time travel, not exactly, but she feels like she’s been given an opportunity to fix her marriage before it starts . . .

Is that what she’s supposed to do?

Or would Georgie and Neal be better off if their marriage never happened?

Georgie and Neal’s characters together are really interesting. Georgie is very real and down to earth- most of the time. She’s a fairly successful TV writer trying to make her way into the business to be more successful and of course this is going to have some drawbacks towards her marriage. She’s gone early in the morning and usually home late at night. She and Neal have two children together that love her but barely have any time with her. Neal is the stay at home dad who never really found a career that he loved. Georgie is a sweet, funny, outgoing thirty- six year old who has been with Neal for fourteen years. Neal is the exact opposite of Georgie. He is a very private person who doesn’t like to be put in the spotlight and loves drawing and doodling. It seems weird that they would have been drawn together but they do say opposites attract! In my opinion I had a hard time believing that they could be happy with one another being that they were so different.

What I loved the best about this story- other than the communicating in the past- was the flashbacks. Georgie would often think back to her college days on how Neal and she met. Younger Georgie was very excitable and had fresh outlook on the world. She had no idea what falling in love would be like until she met Neal. It was refreshing for her to go back and see why they were together in the first place.

Okay, clearly there is something missing from these details on another aspect to Georgie and Neal’s problems and there is. And his name is Seth. Seth is Georgie’s best friend. She’s known him longer than Neal- she worked with him on the school’s paper in college and then began her business career with him. So he is always around Georgie and vice- versa. You get the vibe that Seth has feelings for Georgie but she clearly doesn’t reciprocate them. However, if you’re like me and tend to always root for the best friend, well sometimes I couldn’t help but wonder if Georgie had made the wrong choice especially when she starts having doubts about her marriage. It’s a complicated life with complicated relationships but one thing’s for sure, Georgie stands her ground for what she believes in. She treasures her friendship with Seth and loves Neal to the moon and back.

There are also some pretty great side characters that I loved in this story that I think deserve mentioning. Heather, Georgie’s eighteen year old sister with a different father who is going through some trials of her own but doesn’t have a problem voicing her opinion on Georgie’s. Georgie and Heather’s mother is hilarious, she’s married a man twenty years younger than her (almost the same age as Georgie) and she breeds Pug dogs.

The writing was done really well for this story. I loved the plot and all the characters. I especially loved the twist of Georgie being able to communicate to Neal in the past. The only thing I wasn’t entirely sold on was the ending. Near the end there was a truth bomb that came out that wasn’t fully acknowledged and the ending seemed unresolved. But I suppose that’s because Georgie’s life is a work in progress so there wouldn’t have been a clear and concise ending.

Fantasy:  7  *Magic telephone that lets you communicate to a younger version of your husband- pretty cool.

I would recommend this story to any reader who loves a good romance story. This book was just what I needed. Even though I may not have fully agreed with the way the story went I still loved the romance and all the feelings that went along with it. It was kind of therapeutic in a way as it made me think back on my own relationship and dwell on the things that I love about my significant other and how important it is we work as a team. Anyways- that’s my gushy take on it. I hope you enjoyed my review and feel free to leave a comment below!