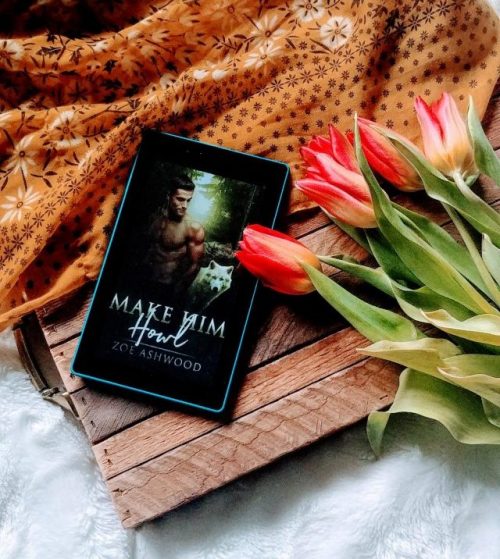 I recently received Make Him Howl – the 3rd book in the Shift series from Zoe Ashwood. I was excited to dive back into this world as I’ve been a fan of the series since Ashwood’s first book – Trust the Wolf and her 2nd – Truth or Bear! Once again, she did not disappoint!

Funny how a wolf can survive after losing half his soul. Twice.

Gabriel is living in a nightmare. His sloppy mistake allowed rogue shifters to kidnap Parker, his best friend and partner. Unwilling to rest and plagued with memories of his twin brother who’d died in his arms, he pushes himself to the limits of endurance in his hunt to retrieve Parker.

Until the day she saves herself.

Parker thought that being secretly in love with her partner was the low point of her career. She was wrong. Forced to compete in shapeshifter cage fights, she commits an unspeakable act she can never undo. With her mind and body too bruised to resume her former job, she’s fighting to keep sane. Keeping away from overprotective Gabriel is even harder.

But their enemies are closing in, hurting shifters and humans alike. With so much to lose, their only solution will be to fight together, even if this brings up truths they’re not ready to face.

Due to the nature of the plot you should read at least the 2nd book – Truth or Bear before you devour Make Him Howl. The story will make more sense and you will have a better understanding of who the characters are!

So much like Ashwood’s other stories this follows two people we have already been sort of introduced through the first two books but this time it’s their time to shine. Parker was seen quite a lot in Truth or Bear as she is friends with Claire Thibault. Gabriel was seen in Trust the Wolf as he is Jason’s cousin. It’s kind of a neat tie in for all the books characters and cameos from past main characters which is something I really love!

Parker’s character goes through some PTSD from a trauma and I appreciate the complexity of this and how it affects her as a person and within her relationships. I felt it was written well and realistic to what she had gone through.

Gabriel lost his brother when he was young and it shows that he’s still not dealing with it properly but taking steps to move in the right direction.

Both of these aspects for these characters brought complexity to the situations and conversations that they were in. I appreciated these factors as it heightened the story for me.

As they are both shapeshifters I found the moments when they were wearing fur some of the best scenes as well. I think Ashwood writes these kind of scenes better and better in each book!

For more info on Zoe Ashwood, check her out –> here!