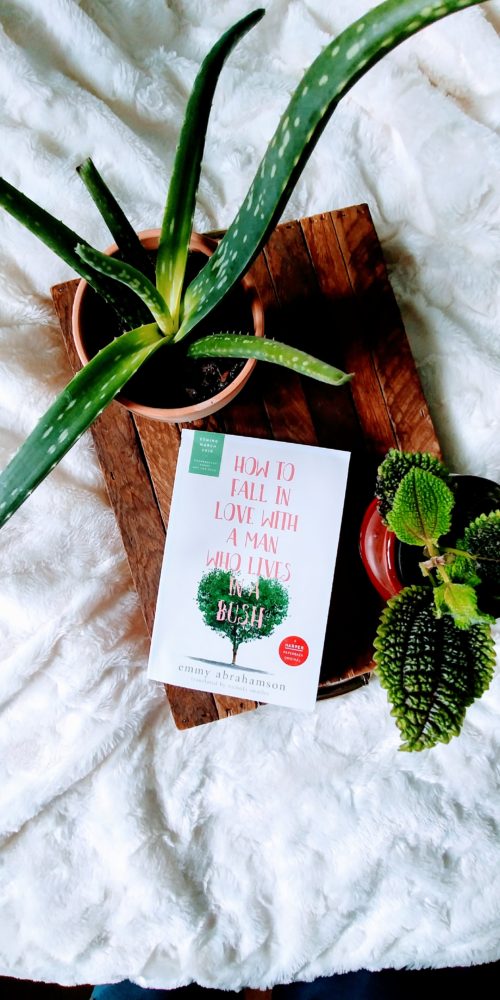 How to fall in love with a man who lives in a bush…quite possibly one of the longest titles I’ve come across in a while. I received HTFILWAMWLIAB (lol) by Emmy Abrahamson from Harper Collins Canada in exchange for an honest review. Okay, but really, I keep having to look at the actual book to make sure I’m getting the title right, could it have been condensed a bit? Like – Scruffy Bush Love or Unconventional Bush Love….or you could just take the bush part out, anyways! Despite the longggg title, I still was quite pleased with this book.

For readers of quirky Scandinavian fiction comes this charming and witty debut novel by Emmy Abrahamson—perfect for fans of Jonas Jonasson.

Love stinks. Or maybe it just needs a shower . . .

Vienna: famous for Mozart, waltzes, and pastry; less famous for Julia, a Swedish transplant who spends her days teaching English to unemployed Austrians and her evenings watching Netflix with her cat or club hopping with a frenemy. An aspiring novelist, Julia’s full of ideas for future bestsellers: A writer moves his family to a deserted hotel in the dead of winter and spirals into madness! A homely governess loves a brooding man whose crazy wife is locked up in the attic! Fine, so they’ve been done. Doesn’t mean Julia won’t find something original.

Then something original finds Julia—sits down next to her on a bench, as a matter of fact. Ben is handsome (under all that beard) and adventurous (leaps from small bridges in a single bound). He’s also sexy as hell and planning to shuffle off to Berlin before things can get too serious. Oh, and Ben lives in a public park.

Thus begins a truth stranger than any fiction Julia might have imagined: a whirlwind relationship with a guy who shares her warped sense of humor and shakes up the just-okay existence she’s been too lazy to change. Ben challenges her to break out; she challenges him to settle down. As weeks turn to months, Julia keeps telling herself that this is a chapter in her life, not the whole book. If she writes the ending, she can’t get hurt.

But what if the ending isn’t hers to write?

I had looked up some reviews, which (shocking) I don’t normally do before I read a book because most of the time I like to go in with fresh thoughts but I did this time for some reason. So I read some reviews where some readers didn’t like the humor or they just didn’t get it and it turned them off from the story and the book and so I was immediately worried about that. BUT YOU KNOW WHAT? Despite the criticism, I really enjoyed the humor. Maybe it’s just me but I thought the sarcastic funny bits were some of the best parts. I get why it might not be for some people but it made me laugh anyways. I guess you just take some reviews with a grain of salt (lol as I’m writing this review, the irony).

But what I would have like to have happened…

However, I do have one criticism. I wish that Julia and Ben would have met sooner. There’s quite a few chapters of fill up on Julia’s life before we get to the actual meeting and I don’t know about you but I’d rather get as much on this love story as I can.

Okay, maybe I have another criticism…

That being said, once it got going I was really rooting for Julia and Ben. I’ve always fantasized a story about this uncommon pairing, more about the homeless part than anything. However, thinking on it, I guess I do have another criticism and I don’t think this is a spoiler…Ben is homeless by choice. And one could argue that people that are homeless are all doing it by choice however, that’s NOT my point. I guess when I was reading this and thought ‘homeless’ I was thinking about someone who had lost their job or their house or their family and was truly out on their own, living on the streets having lost everything. I suppose Abrahamson maybe didn’t want to create that kind of character so instead we have funny, extroverted, optimistic Ben who has an interesting outtake on the capitalistic world instead. And that’s not a bad thing! I truly loved Ben’s character, he is Canadian after all. It’s just if you’re looking for a more in depth look at homelessness you won’t really find it here.

Relationship aside, this book is not just about Julia falling in love, it’s also about Julia finding herself and coming out of her shell. These kinds of stories are my absolute favourite because I truly believe that when you find the person that lights up your whole being you truly do want to strive to be a better version of yourself and try new, out of the box things. (Well, usually.)

Julia is not the perfect girl, who doesn’t really like being an English teacher in Vienna and struggling to find an original idea to write a story about. I happen to love that she is a bit negative and sour sometimes (especially about her job, haha!) because we all are even on our best days and I think that also made this story more interesting because I don’t want to read about the perfect girl with the perfect job meeting the perfect guy. Idealistic, sure. But not entertaining to read. I want GROWTH, I want to read about the hard things, the devastating real thoughts a character has about themselves or their partner and how they learn to waddle through all the mush. I don’t want a perfect ending, I want something that was hard to attain, that there was fight for it, that there were real conversations about it and sacrifices have had to be made. Yeah, I’m getting heavy here. But I think this story delivered on some of those hard things a writer has to choose to write. Writing a character that might not be easily liked (at first) can be hard but one that is certainly more relate-able, I can always appreciate that.

Anyways, that felt long winded but the gist of it is – it was a cute story and while it had the potential to go into some deeper, complicated topics, Abrahamason kept it on the lighter side of things. The title indicates a love story but I think it was more about Julia and her own growth than anything. It still left me with a good feeling, I just wanted more Ben!

I would recommend if you’ve been looking for this type of story or just want a cute, mostly lighthearted contemporary read. I’d rate it PG- 13 and I don’t believe there’s any x-rated content. How to fall in love with a man who lives in a bush by Emmy Abrahamson comes out on March 20th, 2018!

Share if you’re going to buy or read it, I’d love to know your thoughts!

Click HERE to buy How to fall in love with a man who lives in a bush by Emmy Abrahamson and know that I receive a commission if you buy! 🙂