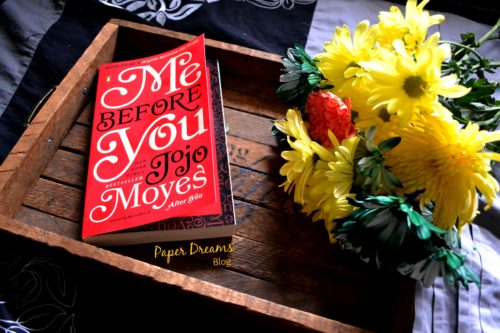 Me Before You by Jojo Moyes

Me Before You has had soooo much hype since I joined the community on Instagram and I’ve enjoyed many photos of the book from other instagrammers which also piqued my interest so I quickly added it to my virtual TBR pile and then the movie trailer came out (and I didn’t know there was going to be one) and I ran out and bought the book because I wanted to read it before I saw the movie. I mean, Emilia Clarke and Sam Claflin – together!? Yes, please.

Louisa Clark is an ordinary girl living an exceedingly ordinary life—steady boyfriend, close family—who has never been farther afield than their tiny village. She takes a badly needed job working for ex-Master of the Universe Will Traynor, who is wheelchair-bound after an accident. Will has always lived a huge life—big deals, extreme sports, worldwide travel—and now he’s pretty sure he cannot live the way he is.

Will is acerbic, moody, bossy—but Lou refuses to treat him with kid gloves, and soon his happiness means more to her than she expected. When she learns that Will has shocking plans of his own, she sets out to show him that life is still worth living.

A love story for this generation, Me Before You brings to life two people who couldn’t have less in common—a heartbreakingly romantic novel that asks, What do you do when making the person you love happy also means breaking your own heart?

Me Before You takes place in present time in the United Kingdom.

This story is mostly told from the main character, Louisa’s perspective. There are random intermittent chapters that are told from other characters perspective such as Will’s mother and father as well as Nathan, Will’s physical caretaker.

I would first like to note that my initial reaction after reading Me Before You was that I was definitely not fond of the ending and it even kind of depressed me but overall I still felt that I enjoyed the story and the transformation of Lou, the main character. However, as I searched around and read more in depth critique’s, like one from The Huffington Post which does contain spoilers (beware), that laid out the facts on why I was so uncomfortable with certain scenes and events within the story. This article really nailed it! And as much as I wanted to continue loving the story I was enlightened to another viewpoint that really changed the way I felt about this story. So, initially I had given the story 5/5 on Goodreads but now that I have given the storyline and characters more thought I think my true rating would be closer to 3/5.  You can read the article I mentioned here. I suggest not reading it until after you’ve read the book, major spoilers, but that’s your call.

Regardless of criticism on the plotline, I still loved Lou’s character. As soon as I seen that Emilia Clarke would be playing her I knew I had to read the book (Big Game of Thrones fan here, hehe). Lou, short for Louisa, comes into the story as a fairly regular girl who lives with her parents, has been working at a tea shop for quite some time and making excuses not to watch her boyfriend go running. She lives a quiet and predictable life until she loses her job at the tea shop. This matter of events then leads her to start working for the Traynors. But let’s back up for a second. Lou still lives with her parents in an impossibly small bedroom as her sister, who got knocked up in College, has a five year old son so they use the larger bedroom. Lou is teased about not being asked by her boyfriend, Patrick to move in together or get married since they have been together for six years. Lou likes Patrick but she knows deep down that she doesn’t love him. What bothered me the most about her was that she didn’t have a back bone and own up to her feelings towards Patrick and quite possibly if Will Traynor had never entered her life, she would’ve been stuck in a loveless relationship for even longer. I was just wishing that she could have come to terms with this herself and sorted it out with Patrick rather than the way it happened in the story.

The more time Lou spends with Will, the more her real personality begins to shine through. Lou needed someone to help her out of the rut she stuck herself in and Will seemed to be the perfect person to do so. He opened her eyes and made her believe that she is more than capable of pursuing life outside of her comfort zone and the boundaries she unconsciously placed around herself.

The flaws that made me deeply uncomfortable were some pretty major issues in the story. Without going into too much detail because of spoilers I would just like to point out that if an employer hires someone to care for someone else who has had suicidal tendencies in the past then it is their job to disclose that information to whomever it is that they hire. It is not the employees right to find out that information by mistake. This was an oversight on the author’s part I think because in the real world this would not be something that would be overlooked or they could have a major lawsuit on their hands. Anyways, that’s one of my concerns. Also, the ending. I will forever and always have a moral complex about that ending.

So as far as the romance side of things go, I loved the banter between Lou and Will. They consistently joked with one another and the flow of the conversation felt natural. Will is a very moody human being while Lou tries to pull him out of the shell he’s put himself in. I enjoyed her trials and efforts for this. They had some special moments between them that Jojo Moyes captured beautifully, especially near the end of the story, even under the unfortunate circumstances.

One thing that really frustrated me while reading this was from my urban planning perspective – all the complications Lou had to go through to plan to take Will to events by making sure that they were wheelchair accessible. I am glad that Moyes focused on this particular point as I don’t think the majority of people even think about these kinds of complications when they travel or even to quickly go out somewhere. The frustrations and limitations it places on people with disabilities on being able to enjoy a venue is very sad! It’s an unfortunate dilemma when someone shows up somewhere that claims they are accessible but perhaps not exactly right for that person with that particular disability. It makes my heart sad knowing that there are really so many places that are not accessible to people with disabilities. Urban planners, architects and engineers, if there is one thing you take away from this story – it’s this!! We need to be better at designing and integrating structures and buildings for EVERYONE. Okay, that’s my rant.

Adventure:  6  *There’s a bit of adventure to be had but I’m not going to spoil that part! You have to read it to find out! Hehe.

Romance:  10  *It is a romance novel so it gets top points for that. Still mad/sad/conflicted about the ending.

Alright, honestly I still do not understand the hype for this book. I liked it okay but it just wasn’t a thrilling, heart throbbing, page gripping story. I enjoyed it for the most part but the moral implications and flaws of this story did not sit well with me. The ending was DUMB. There, I said it. I would have given it a 5 star review if the ending was different. I’ve thought about reading the sequel, After You but I’ve read some negative personal reviews so I’m not sure if I should give it a go or not. Maybe. I still love Lou’s character and would be interested in finding out what happens to her. I am SO CONFLICTED. If you’ve read both books please tell me whether its’s worth reading After You or not! Pretty please. Also, leave comments and let me know what you think of my review and the book itself!