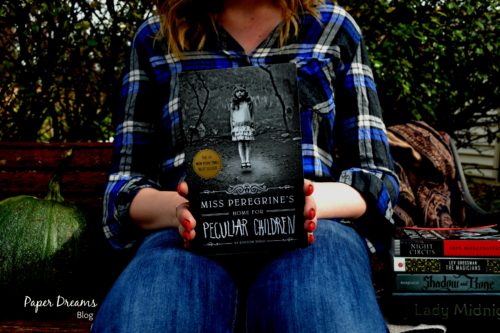 I actually received Miss Peregrine’s Home for Peculiar Children (gosh, that’s a mouthful!) by Ransom Riggs from my sister for Christmas last year! So it’s been sitting in my TBR pile for a while. Mostly what prompted me to get it read finally was the fact that the movie was coming out! So I finally read it, hoorah!

A mysterious island. An abandoned orphanage. A strange collection of curious photographs. It all waits to be discovered in Miss Peregrine’s Home for Peculiar Children, an unforgettable novel that mixes fiction and photography in a thrilling reading experience. As our story opens, a horrific family tragedy sets sixteen-year-old Jacob journeying to a remote island off the coast of Wales, where he discovers the crumbling ruins of Miss Peregrine’s Home for Peculiar Children. As Jacob explores its bedrooms and hallways, it becomes clear that Miss Peregrine’s children were more than just peculiar. They may have been dangerous. They may have been quarantined on a deserted island for good reason. And somehow—impossible though it seems—they may still be alive.

First thing that I wanted to make mention of; I was recently at a book club meeting and this book was brought up there and as we were talking about it, a friend mentioned that she didn’t want to read it because the cover looked scary. I won’t lie my friends, the cover also kind of wierded me out before I read it. However, as I began to read it I realized that it’s not scary at all. Trust me. So as common consensus I think this may be why some people are deterred from this series, because the cover looks a bit freakish. Fear not! It’s really not. I’ve read some really horrific books and this is definitely not one of them. When you find out the reason of the old photograph cover of the little girl hovering slightly above the ground among all the other weird and somewhat creepy photos in the paperback edition, you will laugh for thinking that this book was any kind of scary. It’s pretty interesting in an odd sort of way actually.

Among a sea of young adult books that have flourished with young heroines, here is one from the perspective of a 16 year old boy – Jacob. Jacob is kind of socially awkward – only having one friend who doesn’t really turn out to be a friend at all and then when an accident happens to his grandfather, all hell breaks loose for him. A little while later he and his father go on a trip to Wales and this where – FINALLY- things start to get really interesting for Jacob and where he ultimately fits in.

But come on, who are the real stars?

Because this is the first book, an introductory if you will, Jacob is kind of a bit of a yawn compared to all of the Peculiar Children. Let’s face it, they basically steal the show here. And that’s okay. They’re pretty interesting. Without giving away spoilers, I really enjoyed reading about the other Peculiar Children and they could have a book all to themselves really. Ransom Riggs really made a point to make the Peculiar Children stand out among all the other fantastical, magical characters that are being written for other stories and I think he succeeded, they’re pretty peculiar.

However! This book was raved about on Instagram for quite a while and had to be considered quite popular for the movie industry to pick it up, while I liked certain aspects of it, I wasn’t altogether wow-ed by it. It didn’t seem to spark a lot of anything for me. I think I’ve pinned it down to a couple things that didn’t sit well with me. One was that it seemed to take forever to get to the point- for Jacob to get to Wales and get the ball rolling. I understand the importance of the buildup of events but I just feel as though it could have taken a few less pages to do so. A major offset for me was that it didn’t seem like there was a lot of character depth. This may be dependent on how short the book is and that Riggs focused more on the plot but I felt a bit more attention to flimsy dialogue and rash actions made by characters may have helped the story in terms of its depth. But hey before I start to sound too cynical, the plot was very interesting and is what ultimately kept me reading it. I loved the concept – big fan of it!

More about the Author

The author, Ransom Riggs is currently 37 years old and initially went to school for film at the University of Southern California in Los Angeles. However, life has its way of creating different story lines and Riggs evidently started to write instead; he was writing as a daily blogger for mentalfloss.com, from where an opportunity came from Quirk Books asking Riggs to write a book about Sherlock Holmes for them, so of course he jumped at the chance and The Sherlock Holmes Handbook was born! After this came Miss Peregrine’s Home for Peculiar Children and the idea for the book came after looking through some vintage photos that sparked something in him- a neat visual aspect that was included in this book. Another cool fact- Riggs is married to a fellow young adult author- Tahereh Mafi, writer of the Shatter Me series. How sweet is that? They write, travel and drink tea together. Sounds absolutely lovely to me.

Find out more about Ransom Riggs and his work here!

I would recommend this book/series to younger and older teens. I don’t really think the content is quite young adult material as it tends to be on the lighter side of things. I would consider it PG- 13. There are no sexually explicit scenes and perhaps a few curse words but nothing major or extreme. Yes, this is the first book of the series! Hollow City is the second book and Library of Souls is the third. Personally, I haven’t decided if I will continue with the series, mostly due to my preference of content wanting to be a little darker, it was fairly tame for my liking but this is perfect for those who don’t like that style. But perhaps I will try the second book out sometime in the future, I just can’t be sure. I also haven’t seen the movie adaptation yet and I know they’ve changed a few things from the book so I’m not sure how I’ll like it. Hmm. What do you think? Have you read this book, what did you think? Did you see the movie? Was it close in comparison to the book? Let me know your thoughts in the comment section below!