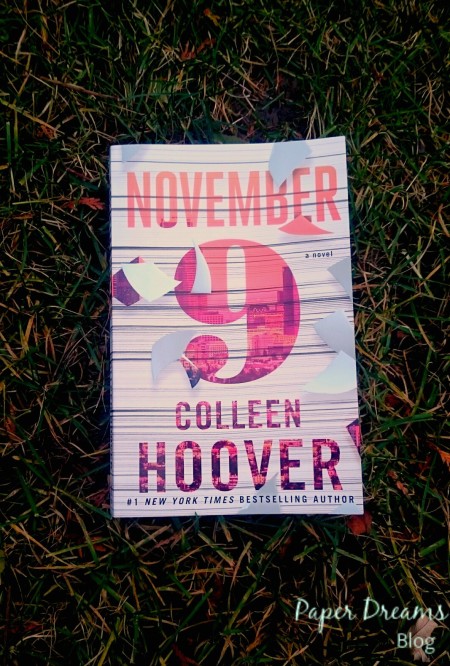 I took another hint from my fellow booklovers on Instagram and picked up Colleen Hoover’s newest book- November 9. I’ve never read any of  Colleen’s books before but I was mostly happy with the outcome of the story.

November 9 is about a girl named Fallon who was an up and coming actress in her teens until a terrible accident destroyed her dreams, leading her to pursue a career across the country. On her last day before she is set to leave, a weird but enlightening encounter with a writer named Ben in a coffee shop happens. There is an instant connection and the two of them decide that for the following five years they will meet up on November 9th to touch base with each other, in the mean time however, they are not allowed to use their phones or Facebook or any other social media to contact one another so it’s like meeting each other for the first time each time. They also make an agreement that Ben the Writer will document it all for his novel that he is writing. It sounds romantic but can two people really only connect with each other once a year? What will happen?

First off, it’s romantic, a grand gesture of a true love story for the characters to be continually devoted to that day. This story is compartmentalized into the 6 days (includes the first time they meet) of each November 9 focusing on the events of what happens each day. My issue was that I wanted more. The characters talked a bit about what happened in the year leading up to their meetings but I never could get fully into it. It seemed like one November would pass all too quickly before the next one loomed. And always caused me to question: Is one day a year all it could take for the average person to be devoted to another, no matter how much they click?

The story is written from both Fallon and Ben’s perspectives. Fallon leads with an air of uncertainty and insecurities worn on her sleeve while Ben makes up for it with blunt statements and confidence. Ben is very sweet towards Fallon and always knows what to say to manage her insecurities. If I were Fallon there would be no way that I would agree to only one day of contact per year. Someone who clicks with you right away, who makes you feel loved in all ways possible- how could you possibly not allow them in your life every day? I know, it was dramatic effect for the story but I feel in real life today- finding someone who understands you, knows how to boost your confidence and genuinely cares for you is no small feat. I did love this plot by Hoover but ultimately I would have enjoyed more of a plot twist of one of the characters breaking the rules and seeking the other out on a different day, declaring their love for them.

I was also not a fan of the ‘homework’ that Ben wanted Fallon to do. After their first encounter he challenges her that she should date and see other guys so that she experiences what other girls do, as they are not exclusive with one another. I don’t know why this bothered me, but it did. Yes, Fallon has every right to actively seek someone else out since her and Ben are not actually dating but honestly if her heart is going to be continuously with Ben and vice versa, why lead on other people just for the sake of having an experience? I don’t think that’s fair to anyone else unless they know the circumstances. So, not cool on that part. All in all though it was an interesting read which did lead me rooting for them both to be together. 🙂

Romance: 10  **This the main genre of the book and mostly what it involves. So yeah, full rating.

I would recommend this book to older teens and anyone who loves a feel good romance novel. Be forewarned- it’s not all rainbows and butterflies. I didn’t talk about the majority of the plotline for a reason as there are complications that occur in both Fallon and Ben’s lives leading up to November 9 – so you’ll feel curious and want to read it as well, which I hope you do. There is some mature content. I wouldn’t say it has erotic content but a more toned down version, PG- 13. This is also a standalone novel for those who don’t like waiting for series or are currently in between series, this is a good one to check out! I didn’t know much about Colleen Hoover before but I will say that since reading November 9 I will probably be active in pursuing her other novels as well. You can find more at her website here. For those who have read it, what did you think? Did you think Fallon and Ben are a good pair? Did you like the plot? Why or why not? And for anyone to answer: Could YOU do it?… Be devoted to meet one person you connect with once per year (on a romantic scale)?

On another note I found some interesting events on the date November 9 throughout history, here are a couple:

*In Germany in 1921, Albert Einstein received the Nobel Prize in Physics for “his services to Theoretical Physics, and especially for his discovery of the law of photoelectric effect.”

*Anne Sexton was born in 1928, a famous American poet and writer whose work was often influenced by her mental illnesses which she suffered from most of her life.

*In the United States in 1967, the first issue of Rolling Stones Magazine founded by Jann Wenner was published. The first issue’s picture was of John Lennon.

* In Germany in 1989, East Germany opened its borders allowing citizens to cross into the West for the first time since the Berlin Wall was built in 1961.

For more, visit this site.

2 thoughts on “Book Review on November 9 by Colleen Hoover”