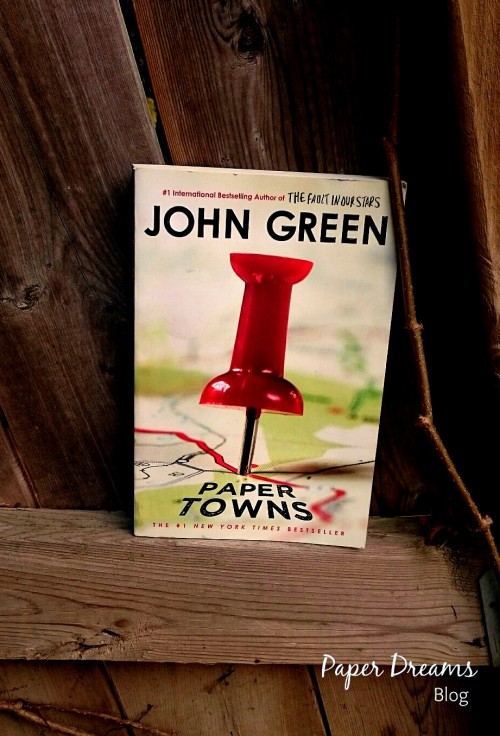 I absolutely loved this book. It brought out so many truths that I didn’t even realize that I needed to realize until they were realized, you get me? Also, for those of you who have watched the movie and not yet read the book- please read the book!! I did enjoy the movie but the book had so many more human moments that didn’t get translated to the screen that I thought were necessary to fully grasp feelings between the characters and feelings that were brought out for the reader.

This story mostly took place in a large subdivision in Orlando, Florida. Quentin Jacobsen is the main character, otherwise known as Q. The story starts off with his mild obsession (and that’s putting it lightly) of his beautiful, popular and secretive neighbour, Margo Roth Spiegelman. Margo hasn’t directly spoken to Quentin in years but one night, a few weeks before their high school graduation she suddenly appears in his window and takes him on a wild adventure for the night. The next morning he wakes up, excited and nervous to see Margo at school but only to learn that after he last seen her, in the early morning hours, she disappeared, leaving a trail of clues to her possible whereabouts. Quentin then takes it upon himself to find and save Margo.

Margo, herself was a mystery. I was pleasantly surprised by her character. Sometimes I hated her for leading Quentin on a wild goose chase but I also understood why she left and what she was doing for Quentin (even if she didn’t plan it that way). She was way more complex than her movie character gave her credit and probably one of the top reasons on why I would recommend this book; to read a character as interesting and devastating and real as Margo Roth Spiegelman. Her written character reminds me to look more closely at people and try to understand that what people want you to perceive on the outside is often not at all what’s happening on the inside.

What really stood out to me was the concept of placing someone on a pedestal and believing they are perfect in every way. This was essentially how Quentin felt about Margo (at least at the beginning). He believed that because she was beautiful and popular that she couldn’t possibly have any worries or fears or that she might not be happy. This is dangerous to do. That’s the thing when you idolize someone you hardly know or used to know, when you finally get the chance to know them it comes as a shock to find out that they weren’t who you thought they were. You see their insecurities, worries, and sadness that are part of who they really are. These are not necessarily faults but rather more complexities to a person’s personality which forced Quentin to look at a girl he was obsessed with and confront the notion that she was just a girl, human no less.

This story was so much more than just Quentin and Margo though. It also focused on Quentin and his friends that he grew up with, Ben and Radar. How they were coming to terms with graduation and that they were all going to different colleges and that they needed to go on one last adventure before they would separate. I usually laughed at the scenes with the guys, Ben was the funny one and he usually said something wildly inappropriate while Radar was consistently the voice of reason. Quentin was somewhere in the middle. Then there was Lacey. She comes in after Margo’s disappearance. And you realize that she’s not some dumb popular girl when she becomes involved in the storyline too.

There are so many things that I loved about this book, especially the whole concept of Paper Towns (as I was an Urban Planning major J ), which I don’t want to give away among other things with spoilers so here is my rating system! For those who are new here, I rate the book on various genres that appear in the story.

Romance: 9  *Quentin’s love for Margo is no secret and his journey to find her is proof of it. There is also a side story love that is cute too.

Mystery: 10  *Hence, the whole story. Where is MARGO ROTH SPIEGELMAN?

Friendship: 9  *Why isn’t this a genre? Stories about good companions or friends coming together and knowing the main character wouldn’t be able to figure it all out without the help of his friends? Anyways, this was a major focal point so, yeah, it’s up there.

I definitely recommend this book. EVEN if you have seen the movie. There is a small use of profanity or inappropriate- ness but it’s mostly with one character and pretty funny. If you like teen boy- girl mystery/romance books with a plot twist then this is for you. What did you think about Paper Towns? Like it? Not like it? (Please keep spoilers to yourself when explaining for the benefit of other readers). Did you like Margo? Hate her? Who else loved Ben? I hope you found my review helpful and I encourage you to comment below.