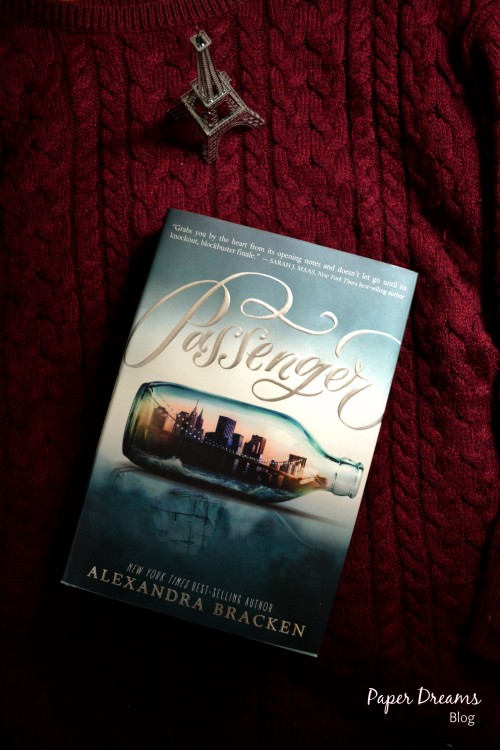 I received Passenger by Alexandra Bracken as a gift on Valentine’s Day. I had been anticipating it as I had seen many fellow bookstagrammer’s posting photos and blogs on Instagram of how good it was and how beautiful the book jacket is! And I am happy to say that it did not disappoint! I read this all in one sitting- having to be pulled away to make and eat supper during it, only to be enticed right back into it. I have already recommended it to a few friends.

passage, n.
i. A brief section of music composed of a series of notes and flourishes.
ii. A journey by water; a voyage.
iii. The transition from one place to another, across space and time.

In one devastating night, violin prodigy Etta Spencer loses everything she knows and loves. Thrust into an unfamiliar world by a stranger with a dangerous agenda, Etta is certain of only one thing: she has traveled not just miles but years from home. And she’s inherited a legacy she knows nothing about from a family whose existence she’s never heard of. Until now.

Nicholas Carter is content with his life at sea, free from the Ironwoods—a powerful family in the colonies—and the servitude he’s known at their hands. But with the arrival of an unusual passenger on his ship comes the insistent pull of the past that he can’t escape and the family that won’t let him go so easily. Now the Ironwoods are searching for a stolen object of untold value, one they believe only Etta, Nicholas’ passenger, can find. In order to protect her, he must ensure she brings it back to them— whether she wants to or not.

Together, Etta and Nicholas embark on a perilous journey across centuries and continents, piecing together clues left behind by the traveler who will do anything to keep the object out of the Ironwoods’ grasp. But as they get closer to the truth of their search, and the deadly game the Ironwoods are play­ing, treacherous forces threaten to sep­arate Etta not only from Nicholas but from her path home . . . forever.

I will start off by saying- YES, time travel. I love everything to do with time travel. All of its positives and negatives. It’s a really interesting concept. So, of course that hooked me right away. Bracken did a marvelous job of piecing together the story with various locations in different time periods that created a vexing mystery that captivated my full attention.

The book jacket is absolutely beautiful. Whoever created this, well done. And not just the book jacket but underneath, on the hardcover, is a symbol of Etta’s family. Also beautiful! Marketing was done really well for the appearance. I could stare at it all day.

Etta did kind of bother me a bit. For the way that she was portrayed- ditching her ex- boyfriend so she could practice her violin and sacrificing everything to be a pro, I expected a more cut throat kind of personality but instead she was kind of timid. One of the only things that truly bothered me was her name- Etta. It’s short for Henrietta. Every time I was reading her name I kept thinking Ant or E.T. in my head. Weird, right? Every author wants to try a unique name that will make the reader remember their characters but unfortunately this one didn’t do it for me.

Nicholas and Etta have great chemistry. Right off the bat, you know Nicholas has insecurities because of the color of his skin and how he has been treated in his time period but then comes along Etta who is from the 21st Century and naive to the ways of society in various time periods, well it’s one thing to read about it but an entirely different thing to witness it. Etta’s naivety is very sweet, in a way and I love that Nicholas is so shocked by it- that she could possibly see him as something more- looking past the color of his skin. I am all for the buildup to a kiss and everything that goes with it and Alexandra Bracken did not disappoint! I will rate a book solely on this aspect alone and I was not let down.

Mystery: 7  *Etta is to find a stolen object to bring back to the Ironwoods- the reason why she is led on the adventure. She is given clues from her mother- almost like a treasure map but written in code in a letter from her mother. Which is perfect since Nicholas is technically a pirate!

Romance: 8  *Lots of focus on Nicholas and Etta. I’m okay with that.

Science Fiction: 8  *There are always different rules to time travel with any author who attempts it. This one is no exception. Alexandra Bracken does a great job of having her characters describe the process with the positive and negative side effects. The ending also has a little surprise for the characters in this respect.

My overall rating is 4/5 stars!

I would recommend Passenger to pre- teens and older. This story skipped around using actual curse words and there was no explicit sexual content- I would rate it PG-13. This book is the start of a series. The second book is titled- Wayfarer which won’t be released until 2017. I don’t know what I am going to do until then! Read more books I guess. I really enjoyed this story and I hope my review helped you to decide if you want to read it too. Please let me know in the comments below, what you think and what you thought of Passenger!