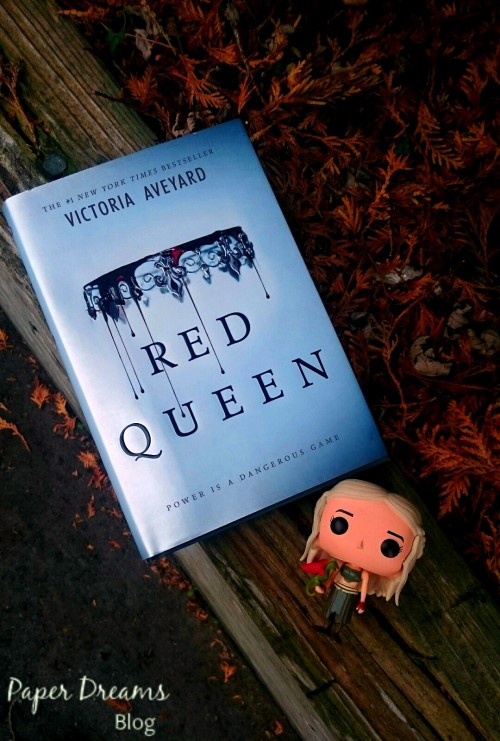 After reading some great reviews I decided to pick up Red Queen by Victoria Aveyard. I read this in almost one sitting causing me to be pretty tired for work the next day. BUT so worth it! Red Queen is a fantasy/dystopian/romance Young Adult novel.

Red Queen is about Mare Barrow who lives in a world where the Silver Elite rule because they have heightened abilities while she is part of the lower class Red’s who work to serve the Silver’s world. Mare’s three older brothers have been taken one by one as they turn eighteen to serve in the Silver’s war against the Lakelanders. All Red’s are conscripted when they turn eighteen. Now Mare’s friend Kilorn has been conscripted and she goes to great lengths to help save him. Through a weird turn of events she finds herself working at the Silver Palace in her Region leading her to find out that she, herself has an ability- a power, even though her blood is Red. She’s then forced to embrace her new power by becoming part of the kingdom through betrothal as well as becoming part of the Scarlet Guard- a Red rebellion group. Her new position and power is deadly but she’ll need all her wits about her to see friend from foe in this strange new world.

Red Queen has a serious Hunger Games vibe to it. Which I LOVE. Because what’s not to love. A dystopian survivor romance using society’s flaws to help save the underdogs. My kind of story. The Silver Elites remind me of District 1: having all of the power in their hands, assuming they are unstoppable and that everyone else will contribute to their glamorous way of life. But of course, you hear the other side of the story, from the Reds, which are like District 11: who do not live glamorously while they work every bone in their body to put food on the table, living in run down shacks just trying to survive. Dystopian- esque stories are always going to have some sort of similarities to each other but if the author delivers an interesting plot with unique characters then I am all in. And this is a good one!

I love Mare and her teenage angst towards society and her willingness to help everyone she loves (Sound like someone familiar?…hmm…Katniss Everdeen?) But I also think she can be abit dense sometimes, when it comes to her love life. She’s potentially got three guys who are interested in her. One, whom she grew up with. Two, a prince that changes her life. Three, another prince who seems too good to be true. I’ve always been a fan of the best friend love interest but sadly he is not that big of a character in this story. I’m hoping for more of an appearance of him in the next book. I was not a huge fan of the romance that went on in this story but it was a necessary evil I suppose. I guess the point of this segment is that Mare is one of the girls who doesn’t believe she’s that intelligent, or pretty or interesting so how could anyone possibly be interested in her when that really isn’t the case at all.

(Photo from Flickr by flavio rucci. Reminded me of a certain scene with Mare and a prince)

I was impressed by the emotional layers the author gave some of the characters, like Cal, one of the Princes for example. At first you’re made to love him since he helps Mare but as you keep reading there is a whole other depth to his character, the way he feels and why he does what he does. The illusion that there is a definite line between who’s good and evil is significant. Character depth and development is always important to me, it makes the plot stronger and more enjoyable to read.

Other than the different color of blood distinguishing the classes of people in this world and ruling by a monarchy (at least in Canada), I felt it could be very relatable to our society. The fact that the people with heightened abilities are powerful and control how society is run is somewhat similar to our society. For example, some people in the story are able to control technology in different ways…comparable to how certain people today who are crazy code writers also control technology? Mark Zuckerberg or Steve Jobs are examples of people who have/had heightened abilities and could control technology and majority of society knows who they are because of their accomplishments. Other people in certain fields have the essential knowledge and excel at what they do and because of this- depending on the field- make a lot of money, increasing their status and class in society. We distinguish our classes of society by the amount of money they make but we shouldn’t forget that if we didn’t have the essential skills and resources that ability may never be harnessed properly. The difference in Red Queen though is that the Silvers are just born with their ability and then have to learn to harness it whereas with us, some heightened abilities take years to even show that they’ve become strong. Okay, I think I’m starting to ramble and hope someone can make sense of this. Anyways that’s my two cents, I started out thinking Red Queen’s world was similar to our society but the more I thought about it I realize how many differences besides the obvious that there are.

As for the author, Victoria Aveyard, she sounds super cool and like someone that I would love to go for coffee with and discuss tv shows and books. She has graduated with a BFA in screenwriting from the University of Southern California. She’s also a blogger who tends to forget to blog frequently. Her long list of tv shows she’s watching makes me feel slightly more guilty about my similar list since you know, she’s at least productive and came out with a book from it. You can read it here.

Romance: 7  **Fairly tame, but a bad decision in my personal opinion…read to find out 😉

Dystopian: 9 **There was a lot of anguish and anger towards the current society. A perfect mix for a rebellion?

Fantasy: 7  **This part because of the whole Silver vs. Red’s thing. The color of their blood and their abilities distinguish themselves from one another. Personal appearance is human unless distorted for their own purposes.

I would recommend this book to any reader who likes a good dystopian/romance/fantasy story. The language is fairly tame and not much mature content (in the romance department). This book is the first of a series. The Glass Sword is the 2nd in the series and will be released in 2016. The 3rd installments name has yet to be released. There is also a prequel novel called Queen Song, which I hope to read soon as it has been released! So, go forth, read this book and tell me you think!! Thoughts on Mare and her ability? Her choice in men? What would you have done in her position? If you were a Silver, what would your ability be?