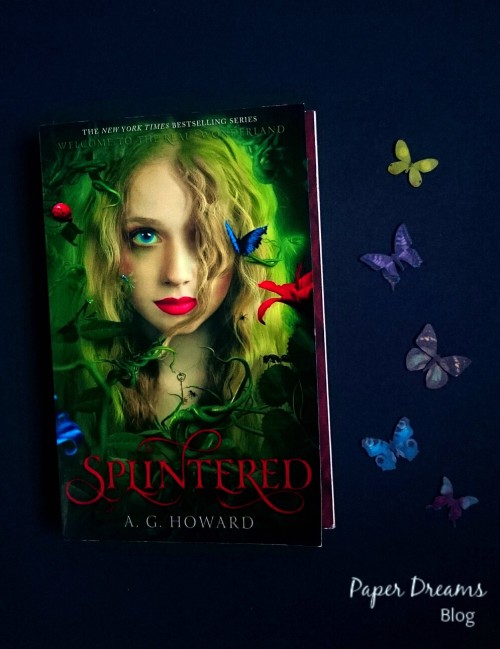 So this book kept popping up everywhere I went, the design and color of the cover caught my eye and I finally decided to buy it (yes, I like pretty book covers).  Good choice on my part. Splintered is the first book of a series by A.G. Howard.

This story is about Alyssa Gardner and her ancestor, Alice Liddell. Name sound familiar? Of course, because it’s that Alice. Alice from Wonderland. Her great-great-great granddaughter Alyssa has always heard the small chattering from the insects, flowers and other small creatures around her, so much so that she believes it’s much like schizophrenia and that she is going mad. And why wouldn’t she? Her mother is already in the mental institution for the same thing. The women in their family have been cursed ever since Alice returned from Wonderland. To cure her mother and herself, Alyssa must find the famous rabbit hole, fall down it and embrace the madness. As well, certain characters from the original story make an appearance however, not as you would remember them! And, let’s not forget, in the real world Alyssa still deals with bullies, confused emotions, and overprotective parents. This is a really crazy, creepy but spectacular read of a fantasized spinoff from the famous story.

Okay, the throwbacks to characters from the original story is probably what I loved most about this story. They make mention that Alice was only seven years old when she ventured into Wonderland and a little girl’s retelling of her experience would distort what she saw and went through. So, the returning characters in this story are a tad bit darker and creepier than the original story given that Alyssa is older than Alice and can truly see Wonderland for what it is. I don’t want to give too many details on who is brought back but there is a major character from Wonderland that is very involved in Alyssa’s story and Alyssa. I will say that I was surprised that the author chose that particular character to be so important to the story but in retrospect it makes sense.

I found that the author used very descriptive words in describing scenery. Sometimes it seemed to be a lot of flowery imagery and I would skim over it a bit but of course, Wonderland is so otherworldly, beautiful and chaotic that it must be described in great detail. Much like the original story I think the author did a wonderful job of creating a visual representation of a more mature Wonderland.

There are supporting characters throughout the story, Alyssa’s friends who are also brother and sister Jenara and Jebediah (Jeb for short). Jenara is only around briefly but you will see a lot of Jeb. I’m still undecided if I like Jeb’s character. Usually I love the guy best friend and wish with all my heart that they will snag the girl but I don’t think I’m feeling it for this one. There’s nothing wrong with Jeb, other than the fact that he is dating another girl that makes fun of Alyssa and her family for being descended from Alice, assuming that she is as mad as she was. Jeb sticks up for Alyssa though and is a good friend. Maybe that’s all he should be? Maybe, we’ll see where the story goes…

Fantasy: 10  *Welcome to a grown up version of Wonderland.

Romance: 7  *Read on to hear about Alyssa’s love life.

Mystery: 6  *Will Alyssa be able to cure her family from Alice’s curse? What is Wonderland like?

Action/Adventure: 8 *You have to read the book to find out about Alyssa’s adventure J

I would recommend this book to teens and up and to everyone who has read Lewis Carrol’s Alice in Wonderland or watched the Disney version. I felt wonderfully nostalgic about this book and loved that it brought up so much from the original. This story’s plot is much darker, sinister and more mature than Carrol’s version but I appreciated that fact. Wonderland was not always meant for children.

So, what do you think about this version? Do you like the characters? Who is your favourite returning character? The story line? Will you continue to read the series? (Next book is called Unhinged). Let me know in the comments below!! I want to hear all about what you think!

2 thoughts on “Book Review on Splintered by A.G. Howard”