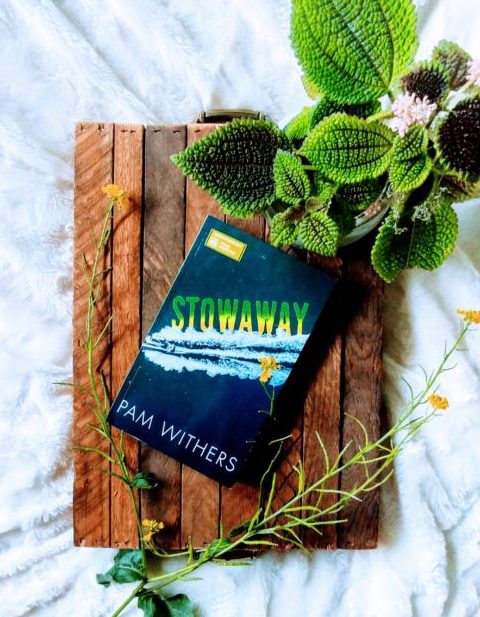 I received Stowaway by Pam Withers from Dundurn Press, a Canadian Publisher in exchange for an honest review. The story interested me and I wanted to read something of a different age category and genre. Stowaway is a teen adventure novel!

Owen’s plan to sail away on an adventure puts him on a collision course with some very dangerous people.

When Owen’s parents leave him on his own for a week, the sixteen-year-old gets bored and hatches a crazy idea: sneak onto the yacht that’s visiting the sleepy Pacific Coast island where he lives and stow away on an adventure! Once on board the vessel, Owen quickly finds out this is anything but innocent fun. The ship is packed with teenagers from Central America, and it looks like Owen has stumbled into a people-smuggling operation.

Complications pile up and as things head from bad to worse, a haunting incident from Owen’s past tightens its grip on him. There’s only one way to break free and make his way home. Owen and the first mate, Arturo — a former street kid — must work together to commandeer the boat and win the trust of those on board. But who’s friend and who’s foe in the shifting tides?

The story follows two teenage boys with two very different backgrounds – Owen, the stowaway, and Arturo, the foreigner. I like that it flipped back and forth between the two of them so you get a better perspective of the story.

I haven’t read a lot on the subject of people smuggling and that was something that drew me to this story. It went quite different than I was expecting but also very plausible. Of course, it also helps to know what people smuggling actually is…

Maybe it’s just me but I was thinking this story was going to be different because I was confusing the term human trafficking with human smuggling which are two VERY DIFFERENT things.

FYI, Human trafficking is involving the exploitation of men, women or children for the purposes of forced labor or commercial sexual exploitation. Human smuggling involves the provision of a service to an individual who voluntarily seeks to gain illegal entry into a foreign country.

However, I think this was a well thought out story to introduce teens to the idea of human smuggling, what kind of goes on and what the consequences of being involved are without being too horrific, as it is aimed at teens.

Stowaway for the classroom?

The book is 197 pages long, it’s a fairly quick read. I think it would be a great book to bring into the classroom to have students analyze and get them talking about the different aspects of the book. One thing I really liked was that Owen didn’t panic in any of the situations he was in, he tried to figure out what he could do and use what he had on hand to his advantage. I think those are also important lessons that kids or teens or anyone else reading this book can take away.

Owen is also super relateable. First chapter- he’s talking about how bored he is on the island with nothing to do and how he longs for something exciting – a thrilling adventure to happen. I think most kids have this feeling.

It seems to be a commonality or a general theme that if you live somewhere nice and safe where nothing really happens, it’s taken for granted. People are too easily bored and wish that something dramatic or chaotic would happen. There’s a term out there for this I’m sure. Owen, a sixteen year old boy who longs for any sort of adventure is no exception here and I mean, yes he’s a teenager, they usually do thrive for some adventure. The fact that something does happen to him and then he learns to appreciate what he’s got is definitely not new but it’s still a story that people like to tell time and time again. This story has caused me to question that- why do people seek out chaos willingly? Is it the thrill of some adventure or is it something much darker ingrained in us? Why are we unable to be grateful for something we have before something ‘bad’ happens? We all learn from experiences, I get that and it changes our perspective but still, it’s caused me to wonder…

I would definitely recommend this to teens or anyone who’s looking for something a little different or interested in a different age category. I would rate the book PG – 13 but as far as I remember there was no R- rated language within it. I do hope that some teachers pick it up and perhaps add it to their curriculum as I think it’s a very controversial topic and would be interesting to discuss in a classroom setting among other aspects the story has to offer.