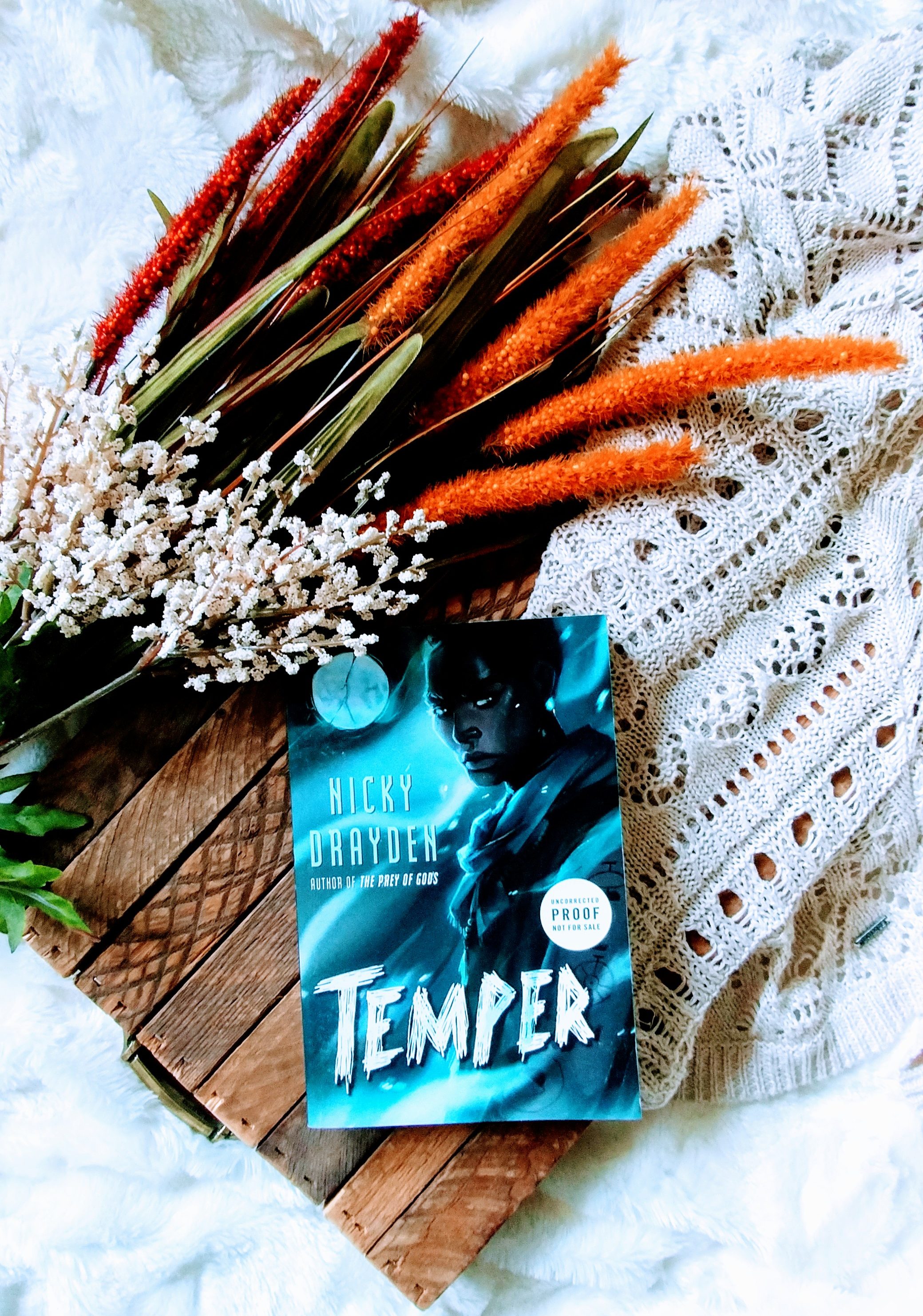 I received Temper by Nicky Drayden in exchange for an honest review from Harper Collins. This was a truly bizarre book. When I was finished I really didn’t know what to think or what to write so I took a few days to mull it over and read a few other reviews to see if anyone else had a similar feeling to mine. Anyways, this is an unconventional mythical lore story that I would rate 16+.

Auben Mutze has more vices than he can deal with—six to be exact—each branded down his arm for all the world to see. They mark him as a lesser twin in society, as inferior, but there’s no way he’ll let that define him. Intelligent and outgoing, Auben’s spirited antics make him popular among the other students at his underprivileged high school. So what if he’s envious of his twin Kasim, whose single vice brand is a ticket to a better life, one that likely won’t involve Auben.

The twins’ strained relationship threatens to snap when Auben starts hearing voices that speak to his dangerous side—encouraging him to perform evil deeds that go beyond innocent mischief. Lechery, deceit, and vanity run rampant. And then there are the inexplicable blood cravings. . . .

On the southern tip of an African continent that could have been, demons get up to no good during the time of year when temperatures dip and temptations rise. Auben needs to rid himself of these maddening voices before they cause him to lose track of time. To lose his mind. And to lose his . . .

Set in an alternate South Africa, the worldbuilding started off with a bang as you came to understand that all babies were born as twins with a set of vices and virtues that defined them. Everyone was judged within society based on the virtues (symbolized by the religious figure Grace) and vices (symbolized by Icy Blue). They go so far as to tattoo these vices and virtues as symbols on each child so it follows them around for the rest of their lives.  Twins, Auben and Kasim are who the story is centered around with more of an emphasis on Auben.  Adding to the vices and virtues the twins can’t stray too far away from each other otherwise the invisible thread that tethers them together will cause a proximity break which could cause a lot of physical and mental pain to both of them with long lasting effects. So right off the bat I was really interested in the concept and how unique it was to other YA books as I haven’t read a premise like this before. However, it took a weird turn.

As the story started out it was loosely based off religion but then at some point it fully switched over and focused more on the Icy Blue and Grace side of things.  I think this could be described as just getting to know one world when you’re suddenly thrust upon another without clear descriptions of either. I don’t mind a little bit of religion as I’m generally open minded but the sudden plunge the story took and how forced it was, was not a great transition for me.

Auben, the main character was unlikable. I think it can be risky to write these kind of characters especially as your main character, as long as it’s done right. At times I felt a little sympathy for him but most of the time I was just annoyed by the choices he was making. He was rude, arrogant and constantly thinking about sex, which given the boosted hormones was acceptable but also very blunt. Sometimes I don’t mind a character like this if I find some sort of connection with them and they seem redeemable but in this case he just didn’t appeal to me.

The story was interesting but it was also disjointed. It felt like a lot of scenes were just strung together with no real depth connecting them along with a lot of the relationships that felt forced at some points of the story and then dropped altogether for the rest.

There was also a scene that I distinctly did not like and felt crossed a really weird boundary that I was personally not okay with. It was at that point that I almost put the book down for good but picked it back up later because it happened about 3/4 of the way through and I hate not finishing books.

Perhaps the one thing that I thought was done well was the portrayal of vices and virtues. It was an interesting take on creating personalities and a deeper look into another society that flags miscreants and vagrants as the lesser “beings” while a twin with the majority of virtues is blessed. There’s even a special “potion” that allows you to switch those with your twin for a short period of time. That may be one reason I sympathized with Auben – the twin with 6 vices being dealt a low blow in life and not expected to succeed by their societies standards.

Now despite my not so high rating I still felt like I was honest enough to justify why it didn’t work for me but with that said, what didn’t work for me – may work for you. Maybe you’re like nah I want to read about a bloodthirsty 17 year old that is judged like a demon and you know what? Perfectly fine. Again, I would rate this as 16+ as there are multiple sexually suggestive scenes and some crude language throughout the book. As I said before, this book is bizarre and a bit weird but there is an audience for it so maybe it’s a right fit for you? If you like mythical lore stories with a God vs. the Devil kind of complex but twisted in a very bloodthirsty way then this is your story.