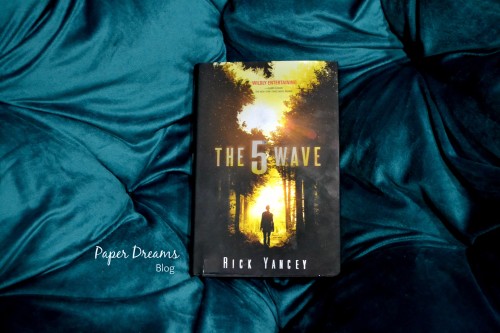 The 5th Wave by Rick Yancey

Again, I recently seen that The 5th Wave was going to be a movie and picked it up from BookOutlet so that I could read it before I saw the movie. It had and has a lot of hype in the book community on Instagram so that also solidified my decision to get it. This book was way different than I thought it would be; it was a much darker and more gruesome read than I expected. From the context of the story though, it makes sense that the tone was fairly gloomy.

Now, it’s the dawn of the 5th wave, and on a lonely stretch of highway, Cassie runs from Them. The beings who only look human, who roam the countryside killing anyone they see. Who have scattered Earth’s last survivors. To stay alone is to stay alive, Cassie believes, until she meets Evan Walker. Beguiling and mysterious, Evan Walker may be Cassie’s only hope for rescuing her brother–or even saving herself. But Cassie must choose: between trust and despair, between defiance and surrender, between life and death. To give up or to get up.

This concept isn’t totally new, obviously. Aliens appear over Earth and want to get rid of the human inhabitants (War of the Worlds?). It’s the various parts of the invasion and how it happens that is the real story here. All of the attacks from the Aliens are personal and it’s truly devastating what happens to the destruction of humanity.

Much as they want you to believe from the synopsis, this book is not all about Cassie nor is it just from her perspective. The story starts out from Cassie’s perspective as she retells what happens in the first 4 waves. The story then switches to Ben Parish’s perspective, also known as ‘Zombie’ to his squad. Cassie actually knows Ben from high school and had a crazy crush on him. He is inside Camp Haven and so you get to read what happens from the inside of the army base. Personally I liked reading from Ben’s perspective more because there seemed to be more details about what was happening there and the characters here were a bit more memorable.

Ringer. She was part of Zombie’s squad. She is very intelligent and totally bad ass. She also loves chess and isn’t afraid to stand up and confront someone when they are wrong. I also love the fact that she doesn’t drop at Ben’s feet because he was the typical jock from high school. She challenges him always and I have grown to love their friendship. Maybe, it will turn into something more? But thank you, Rick Yancey for writing a strong female character that kicks ass!

Cassie and Evan Walker. I don’t want to spoil anything but I have a love/ hate relationship with their relationship. I like Evan but his character just seems sooooo fake. I hope Yancey gives Evan something else to work with on his character and he steps up a bit.

Regardless of character flaws, from my opinion, the story is really interesting. Some of us think about what would happen if aliens appeared and this story does not fall short on what could possibly happen. It’s downright evil to say the least. Don’t worry guys. No aliens yet, we can just read about them for now.

Horror: 6  *I just mention this as some details are given on what happens to people when they are sick in the story and it can be gruesome, as well as some scenes from Ben’s time at Camp Haven.

Science Fiction: 6  *Even though this story is about aliens, there isn’t a whole lot of sci- fi nature to it, just the concept.

Okay, so I recommend this book to ages 15 and up, to whomever likes gruesome, action and drama stories. There is some crude language but my rating would be PG- 13. And another confession- I did see the movie and this is my opinion, don’t waste your time, at least don’t waste your money on it. They cut out too many things I thought were important to the written story and I HATED the acting. They made Cassie look wimpy and whiny and Zombie wasn’t at his full potential. Ringer’s actor also butchered her. It was unfortunate that I paid money to see it and that’s my honest opinion. I do however, definitely recommend the written series – oh, yes did I forget to mention that there is a second book? It’s called The Infinite Sea and the third installment should be out in 2016 ! Hope you enjoyed my review and that you check out this book. If you’ve read it already, let me know what you thought about it, if you agreed or disagreed on any of it. Leave a comment below!