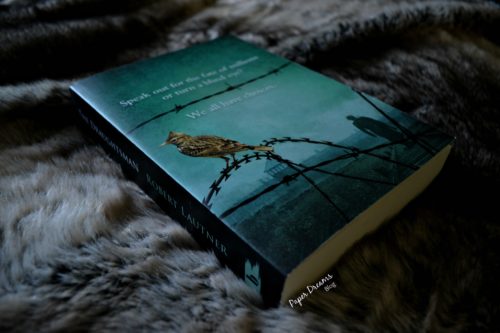 The Draughtsman by Robert Lautner

I received The Draughtsman by Robert Lautner for free as an Advanced Readers Copy from Harper Collins Canada in exchange for an honest review. Before we begin – what is a draughtsman?  A Draughtsman is a person who practises or is qualified in mechanical drawing, employed to prepare detailed scale drawings of machinery, buildings, devices, etc. Important to know! The Draughtsman’s plot is based on a technical drawing that was actually found but it’s essentially a work of fiction.

Speak out for the fate of millions or turn a blind eye? We all have choices.

1944, Germany. Ernst Beck’s new job marks an end to months of unemployment. Working for Erfurt’s most prestigious engineering firm, Topf & Sons, means he can finally make a contribution to the war effort, provide for his beautiful wife, Etta, and make his parents proud. But there is a price.
Ernst is assigned to the firm’s smallest team – the Special Ovens Department. Reporting directly to Berlin his role is to annotate plans for new crematoria that are deliberately designed to burn day and night. Their destination: the concentration camps. Topf’s new client: the SS.
As the true nature of his work dawns on him, Ernst has a terrible choice to make: turning a blind eye will keep him and Etta safe, but that’s little comfort if staying silent amounts to collusion in the death of thousands.
This bold and uncompromising work of literary fiction shines a light on the complex contradictions of human nature and examines how deeply complicit we can become in the face of fear.

The writing style was a little hard to get used to at first. It’s as though the sentences were only half sentences all the time making it difficult to focus. Eventually I didn’t notice it after some time of reading.

The theme of this book is initially morbid as you learn more about the behind the scenes operations of WWII. Sometimes I had to tell myself to ignore the images that would pop into my head from knowing how horrendous some of the Nazi’s were. The beginning parts shouldn’t really make you that comfortable, I mean, I would be surprised if you even liked it because it gave me chills progressing through. But this is a story that has to muddle through the bad to get to the good.

I felt that Ernst was a hard person to like at the beginning due to his naivety. His life motto seemed to be- “I just want to work.” Which is fine and dandy until you realize you work for monsters. I wanted to reach into the book and shake him until he had some sense. But then I realized…this was probably a commonality in Germany. There were probably many Germans who had no idea what was really going on in the concentration camps and the media- shocking!- only portrayed what they wanted the people to see and because they needed work badly they were suckered into doing the dirty jobs. Ernst’s character opened my eyes to another side of Germany and another side of the war that was very vulnerable to what was being done, the people were watched and threatened if they didn’t show pride in the SS and in Hitler. If you didn’t, you were considered a conspirator- an enemy. The Nazi’s didn’t just take away the rights of the Jew, Poles, etc – they took their own people’s as well.

Layout of the book

The book was separated into four parts. All four parts are in Ernst’s point of view. The first two parts were hard to get into – with adjusting to the writing style to trying to not imagine how horrible Ernst job really is. The last two parts were immensely interesting to me. A good deal of hidden knowledge, more secrets are revealed, Ernst has some redeeming qualities coming to light.

I’m not sure if I had a favourite part- other than the ending I suppose. But what I really liked about this novel amidst the horrors of humanity that had ensued is that it is a completely different view of WWII and how contradictory it is. Ernst’s character could have been any German in real life. The thoughts and feelings he had would have been all too real to an actual citizen put in his position. But that is the beauty of it – the ultimate message – we ALL have a choice. And I think this is so powerful. Regardless of your status, who you are – we all have a choice that will determine what kind of person we truly are.

Also just a side note of something I found interesting – Hitler’s name is never mentioned in the story at all. They always use a pronoun when referring to him such as he or him. This reminded me of Lord Voldemort in Harry Potter when everyone refers to him as he who shall not be named. Which is also interesting because in the literary world Rowling’s work with Voldemort and the Deatheaters has also been compared to real world Hitler and his Nazi’s. The power of a name – it warrants fear. I never wondered ever who they were referring to when they said he in The Draughtsman, it was assumed. I just find it interesting how that can be so. Even now, we cringe when we hear the name Hitler or even Adolf because everyone in the world knows who he was. He still has that power over us.

If you’re interested in the parallels of the two, read an interesting article – here.

Historical Fiction: 10  *Top marks because Lautner did an excellent job of re-opening 1944 in Germany with eye- opening scenes of the concentration camps and other parts in Germany.

Horror: 6  *Not in the grotesque way, there are no monsters but men who play mind games and sink their teeth into your consciousness. Real enough to make you cringe.

I will admit this book is really not for the faint of heart. It has a very real, up close and personal view of WWII as you are thrust into the mind of a German who is essentially doing Hitler’s bidding. But if you like a book that has a silver lining among the darkness then this is for you. I am glad I read it because it was very controversial and makes you think more about what you thought you knew about WWII. I think it would have been a hard piece for Lautner to write and I commend his valiant effort for providing a diverse insight of humanity’s darkest days.

The Draughtsman by Robert Lautner is released March 28th, 2017!

Let me know what you think of this novel in the comments below!