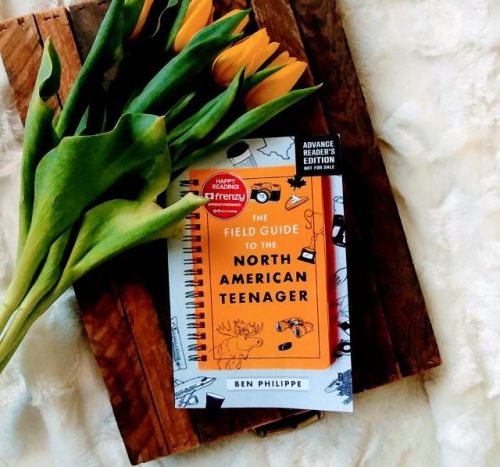 I was sent The Field Guide to the North American Teenager by Ben Philippe from HarperCollins Canada in exchange for an honest review. I saw this book around on Instagram and was interested by it especially after I read the synopsis!

Norris Kaplan is clever, cynical, and quite possibly too smart for his own good. A black French Canadian, he knows from watching American sitcoms that those three things don’t bode well when you are moving to Austin, Texas. Plunked into a new high school and sweating a ridiculous amount from the oppressive Texas heat, Norris finds himself cataloging everyone he meets: the Cheerleaders, the Jocks, the Loners, and even the Manic Pixie Dream Girl. Making a ton of friends has never been a priority for him, and this way he can at least amuse himself until it’s time to go back to Canada, where he belongs.

Yet, against all odds, those labels soon become actual people to Norris. Be it loner Liam, who makes it his mission to befriend Norris, or Madison the beta cheerleader, who is so nice that it has to be a trap. Not to mention Aarti the Manic Pixie Dream Girl, who might, in fact, be a real love interest in the making. He even starts playing actual hockey with these Texans.

But the night of the prom, Norris screws everything up royally. As he tries to pick up the pieces, he realizes it might be time to stop hiding behind his snarky opinions and start living his life—along with the people who have found their way into his heart.

Okay, I loved Norris Kaplan alot. He’s super opinionated and very snarky. Also biased as he is a French Canadian and was reppin some Canadian things – like wearing his Habs jersey in the airport! (also known as Montreal Canadiens from Montreal, Quebec – hockey team).  I felt bad for him at the start when he was moving countries and schools right in the middle of high school. He put a wall up around himself but it slowly got torn down throughout the book – as they do. I just really enjoyed his character – he felt very real.

Alright, so Aarti Puri is the girl that Norris instantly crushes on. She’s a photographer but also really ‘cool’ and not part of the ‘popular’ crowd.  I wasn’t a huge fan of her from the beginning and didn’t really see what Norris was seeing in her. She mostly just annoyed me.

Madison is the girl next door, ‘nice’ cheerleader that worked at the Bone Yard – where Norris gets a part time job. She was alright. I was definitely in favor of their friendship and was hoping it would transition into something more.

Although the girls were part of the drama that is Norris’ life I was actually way more interested in Norris’ friendship with Liam.

Liam may possibly be my favourite character. He’s tall, lanky and keeps to himself. Also, he likes hockey and takes a liking to Norris. Normally, I’m way more invested in the romantic relationship but there was was something about Liam and Norris’ friendship that made me root for it more as in I just wanted to read more about them hangin out and getting a hockey team together.

Not your stereotypical Canadian

I’m from Canada – we’re all very “nice” and say eh a lot 😉 . So I loved when Liam came up to Norris and said, “You’re the super – rude Canadian, right?” because that’s how Norris is. I liked this turn on the stereotype that Philippe wrote for Norris. Like, yes it’s a nice stereotype to have all things considered but hello, we’re not all that ‘nice’ and I thought it was refreshing for Norris’ character to be different in that respect.  I mean I am here for the snark.

Something I also loved was that some of Norris’ classmates called him Canada as his nickname and it made me laugh as one of my boyfriend’s friends from University is from Panama and for some reason everybody just knows him as Panama. Funny how people do that actually??

Something I thought was unique, funny and creative was that Norris kept a field guide – notes on his classmates as a way to assess his new surrounding and at the beginning of each chapter there is something that looks like this:

Identifying Characteristics: Headphones that aren’t necessarily playing anything. Sad eyes. Stand out just enough to let you know to stay away.

For the most part I liked what was going on with the story. However when it came time for the prom I kind of got a bitter taste and fell off the wagon then. The ending was slightly redeeming but not really and my hope is that there is a sequel field guide novel to keep the story moving along because I think it would really add to it overall – at least I hope so because I really enjoyed Ben Philippe’s writing and ideas!

Again, it would’ve been a 4 or 5 star if I hadn’t disliked the prom scenes so much. But here’s to hoping there’s a sequel!

Yes, I would recommend! It’s a quirky coming of age novel that is funny, snarky and a bit endearing. There is some crude language so I would rate it as a PG -13. I’m really looking forward to reading more from Ben Philippe and hope other readers enjoy The Field Guide to the North American Teenager and get some laughs from it!