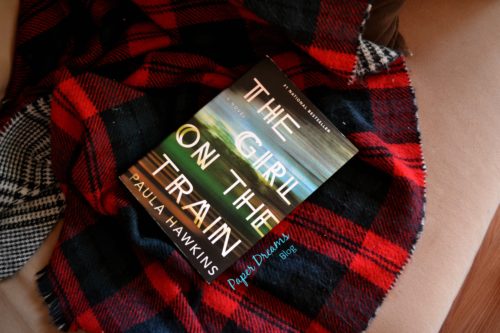 The Girl on the Train by Paula Hawkins

Again, I fell into the clutches of wanting/needing to read a hyped up book. I’ve seen this book everywhere I swear! I don’t normally read psychological thrillers though they do feed my brain like candy trying to figure out what’s going on. I found this book at a used bookstore and snatched it up while I could. I read this book in two sittings and my brain loved me for it!

Three women, three men, connected through marriage or infidelity. Each is to blame for something. But only one is a killer in this nail-biting, stealthy psychological thriller about human frailty and obsession.
Just what goes on in the houses you pass by every day?
Rachel takes the same commuter train every morning and evening, rattling over the same junctions, flashing past the same townhouses. The train stops at the same signal every day, and she sees the same couple, breakfasting on their roof terrace. Jason and Jess, as she calls them, seem so happy. Then one day Rachel sees someone new in their garden. Soon after, Rachel sees the woman she calls Jess on the news. Jess has disappeared.
Through the ensuing police investigation, Rachel is drawn deeper into the lives of the couple she learns are really Megan and Scott Hipwell. As she befriends Scott, Rachel pieces together what really happened the day Megan disappeared. But when Megan’s body is found, Rachel finds herself the chief suspect in the case. Plunged into a world of betrayals, secrets and deceptions, Rachel must confront the facts about her own past and her own failed marriage.
A sinister and twisting story that will keep you guessing at every turn, The Girl on the Train is a high-speed chase for the truth.

I have always been a fan of people watching. It’s just interesting to see a glimpse of people for that 5 seconds wondering what they’re doing or where they’re going – what they’re like. However, I’ve never had anything extreme as what happened to Rachel happen. But that’s the beauty of this story. Things are often and not always as they seem.

This story is told from three different characters perspectives. Rachel- the sad alcoholic and mostly the main character; Megan – a restless, depressed housewife; and Anna- the cheater’s mistress and an ultimate bitch.

The setting is in suburban England. Rachel lives in a suburb close to the commuter train as she had a Public Relations job in London.

You instantly reach out and feel sympathetic towards Rachel as she is the first character you meet in this story and learn that she has recently been divorced from a cheating husband and has been resorting to alcohol as her saving grace. You feel sorry for this girl who rides on the train twice a day, who catches glimpses of Jess and Jason- her fantasy couple who live seemingly perfect lives- at least from Rachel’s view on the train. Until that one day she sees something that she can’t ignore. Rachel is seen as a weak person who has lost her passion for life but still fantasizes that she wants to be with Tom- her ex- husband and when she drinks, she drinks till she’s flat out drunk and blacks out, usually resulting in her not being able to remember much of anything. She is the one you’re cheering for to start making better decisions and get her life back together.

Nobody in this story is normal. Everyone is dealing with something that haunts them and contributes to their actions. As, you get deeper into the story, layers are shed and peeled off as every character has more and more revealed about them that contributes to the mystery. This is an aspect I always find fascinating- the revealing of people’s true character. Chapter by chapter you find out what truly happens and about who each of these people truly are.

Paula Hawkins is an excellent writer. I had thought I figured out the what and the whom of this mystery/thriller but then there would be a changing perspective from one of the characters or some small detail that made me think that I was wrong all along. It was really interesting how she kept engaging readers into thinking different things based on one of the characters thoughts and how they thought. I applaud this effort as it keeps the story thrilling and mysterious!

It’s amazing that this is Paula Hawkins first thriller novel as she writes with such ease I would’ve guessed she had been writing this genre for years. Paula grew up in Rhodesia which is now known as Zimbabwe but moved to London, England when she was 17. She’s previously worked as a journalist for The Times. She has also written some romantic comedy fiction under the name Amy Silver. The Girl on the Train won the 2015 Goodreads Choice Awards Best Mystery and Thriller.

Mystery: 10  *What really happened to Megan (Jess)? Will Rachel be able to sort it out or is she too unreliable?

Romance: 4  *I suppose there is some romance but this story deals with domestic violence and emotional/physical abuse more than anything so not a lot of mushy romance happening.

Thriller: 10  *This did do a number on my brain. I enjoyed the different aspects from all 3 women to make the story more enticing.

I definitely do recommend this book for anyone who is interested in psychological thrillers. There is some explicit language and actions. This story deals with various types of abuse: emotional, physical, alcohol and drugs. It also deals with depression and anxiety. I would recommend this book to older teens and up. There is a movie coming out, also!! So stay tuned for that but for those of you who like to read the book before the movie, hop to it!

Hope you enjoyed this review! What did you think? Have you read TGOTT? Were you surprised by it? Did you guess the ending right? Let me know in the comments below!