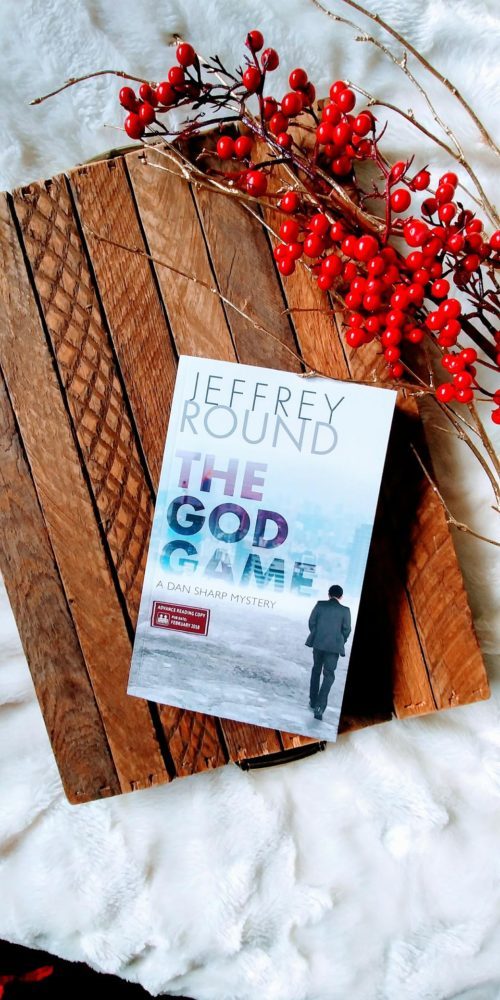 I received The God Game by Jeffrey Round from Dundurn Press in a winter press package. This is not a typical read for me but I was intrigued by the fact that it was based in Toronto and around the era of when Rob Ford was the mayor (when Toronto was in the news alot for his scandals) and coincidentally that was also around the time I visited Toronto for the very first time so I did feel a connection through that. I was also a little leery because The God Game is the 5th book in the Dan Sharp mysteries and I clearly hadn’t read any of the other ones but as I found out that didn’t matter too much and you could probably pick up any of the 5 and read it as it is. Here’s what the actual story is about:

Private investigator Dan Sharp finds himself caught up in a political murder.
When the husband of a Queen’s Park aide runs off to escape his gambling debts, private investigator Dan Sharp is hired to track him down. As the city’s political landscape verges on the bizarre — with a crack-using mayor and a major scandal looming — Dan finds himself pitted against a mysterious figure known for making or breaking the reputations of upcoming politicians. It’s not until a body turns up on his doorstep that Dan realizes he’s being punished for sticking his nose into dirty politics. It’s left to him to catch the killer and prove his own innocence.

I like Dan. I liked his story. He is a gay private investigator with a fiance who is a cop and he(Dan) has a heterosexual son going to school in B.C. and he does have a friendly relationship with the Syrian mother. Dan is curious and smart and obviously doesn’t follow the rules. He always puts himself in danger quite frequently or finds himself in dangerous circumstances but there probably wouldn’t be a story if he didn’t.

So there is one other story that contributes to the plot other than it revolving around Dan solving a mystery; there’s also Dan’s relationship with Nick, his fiance. I enjoyed how Dan’s relationship drama floated in and around the main focus of the story. I was very intrigued by their personal lives because they were interesting and because being gay in 2014 in Toronto had a different vibe as compared to 2018. I mean I guess I don’t know a whole lot about the gay community in Toronto right now but I feel like it is more inclusive than it was even just a few years ago, at least that is the vibe I was getting from the book, that being gay was still something that was a bit hush hush especially in the political world. I liked Nick’s character and thought the added drama complemented the story well.

The novel is centered around a political drama but I think Jeffrey Round did an excellent job of keeping it more entertaining than boring us with political details. This is a work of fiction but he still used the actual mayor of 2014 (Rob Ford) as the mayor in his novel but other political characters that appear are fictional (to my knowledge). What I did find interesting was that at the beginning of this book Jeffrey Round wrote an author’s note that said he wasn’t sure if anyone would believe something like this could happen in Canada as we have managed to avoid disasters in the news and comparatively to other countries…well, we’re pretty tame. This I do agree with but I also think that a lot of scandals do happen, they just don’t make it on the news for whatever reason.

I found the reading pace nice and easy since I wasn’t bogged down with a ton of political details other than the occasional Conservative, Liberal or NDP tagline. The story was compelling as far as a mystery goes but I wouldn’t say it was very suspenseful but I’m not sure if that was the angle he was going for anyways. I liked the ending and I like how Jeffrey Round wrote it, very fitting for the type of story and dilemma that was happening.

One of my favourite scenes was when Dan went to the Ripley’s Aquarium (beside the CN Tower) to meet another character and they were on the moving sidewalk looking at all the sea creatures (there are a lot of various sharks!). I was smiling while reading this part because I was physically there and have done that!! I thought it was neat that he added that scene in!

Yes I do recommend! But again if you like more suspenseful mysteries this may not be for you, but it is thought provoking and makes you wonder about the real world political scandals that occur and what’s “fudged” and what not. And yes you read about Dan and Nick’s relationship and it’s cute but not super romance-y, I’d say it’s very discreet. But I do encourage others to read this and I enjoyed the book enough that I will try to pick up the rest of Dan Sharp’s mysteries or some of his other works!

Jeffrey Round has a blog! Visit him here 🙂