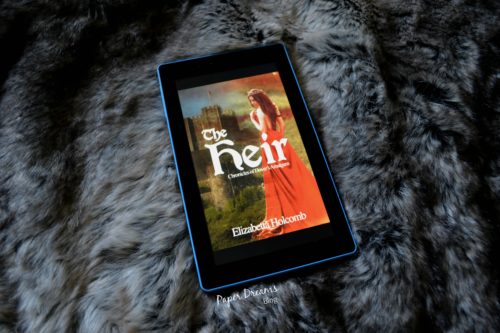 The Heir by Elizabetta Holcomb

I received this story in Ebook format from the author herself as I have been an avid reader of her series since The Guardian (first book in the series) came out. The Heir is the 3rd story told in The Chronicles of Dover’s Amalgam. As much as I liked the other two in the series, The Heir really kept me hooked and excited as I read it. I believe I read it all in one sitting! I definitely think this may be Holcomb’s best yet!

In order to get the man she had been obsessing about, Shelby Hollier has done unimaginable and unladylike things. Like stealing Solomon Tremaine’s wallet, stalking his home and trespassing upon his property. Before she knows it, she is sucked into a wormhole and into a world she never imagined still existed.
Welcome to Dover Castle. A place where things are never what they seem….

If you have read The Guardian and Category Jeremy, which I’m assuming most of you have if you’re reading this review, then you will notice that there is a common trend within all the stories. As with Jareth and Jeremy’s stories, each were centered around the pivotal time in their lives where they climb over obstacles, be it fate or choice, to have found their significant other; this is the same for first born Solomon- The Heir. I’m a big fan of romance, hopeless romantic that I am, so I really enjoy this theme in all of the books so far – I hope it continues – especially as I am intrigued with how Peter will fare!

One of my favourite things about The Heir

There were many things I liked about this story but one of the things that stood out for me was the conversations between the Tremaine children. The first two books have reference to the children but they are often very young and don’t have a lot of important interactions towards the main storyline (besides Jeremy in the 2nd book). This is the first time we are seeing most of them older and having crucial dialogue while interacting with other characters we have known from before. There are quite a few scenes with Solomon interacting with his siblings and they end up being hilarious or quite serious scenes.

I love that Holcomb wrote such diverse personality with each character and I think that really separated them from each other.  The older children were given more prominent roles along with their own mistakes and obstacles they had to overcome. To me, this novel really sets up the rest of the series and gets me excited for the other stories of each child- especially Peter’s!

I don’t have much criticism for this story other than I felt at the beginning that Shelby and Solomon had some very “cheesy” interactions. But don’t get me wrong, I absolutely love the pair. They had so many cute moments where I squealed with joy.

More on the Plot

There is so much more action in this story with the time traveling and the Huns (the bad guys). Solomon plays a big part in reigning in the safety chains on his siblings especially with being the heir as he has more responsibility than the others. I also love that there is some defiance among the clan as it really starts to stir things up for the family.

Again, the majority of the book focuses on Solomon and Shelby’s relationship. I enjoyed Shelby’s presence in this book. She gave some comic relief to Solomon’s seriousness. When Solomon takes over the Amalgam from Jareth one day, it’s important that he has a strong woman by his side, as Jareth has with Elizabet. Shelby may be a crushing, blushing school girl type at the beginning but she ends up making a likeable impression on you that you can’t help but root for her.

Overall: *****/5  *It made me all tingly inside while I was reading so it deserves top ratings!

Yes! I definitely do recommend this story. Don’t get me wrong, I like The Guardian and Category Jeremy well enough but there was something about The Heir that I just enjoyed a tad bit more. I loved the many romantic scenes between Shelby and Solomon and all of the sibling bantering. This story just seemed to have dealt with some complex scenes involving more characters and setting us up for more stories with each sibling. I just thoroughly enjoyed the story and I really hope that other fans of this series will also read The Heir or for those who haven’t even picked up this series yet to go do so!!

If you have read it, what did you think? Agree or disagree with anything I’ve said? Have a different favourite book in the series? Let me know in the comments below!