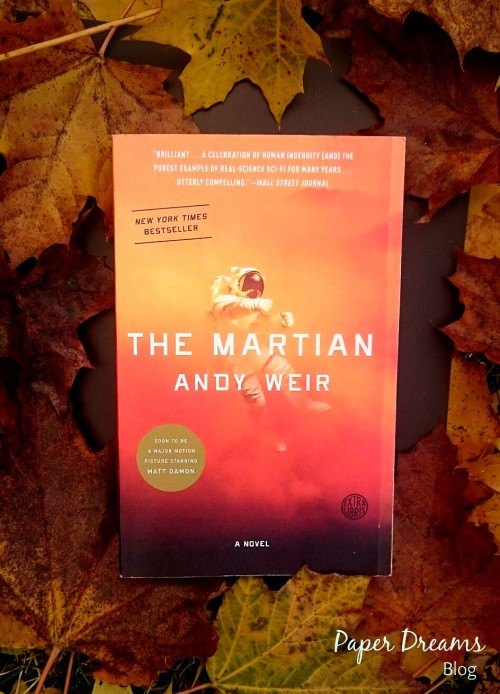 The Martian by Andy Weir

Okay, I’ll admit that as soon as I seen there was going to be a movie adaptation with Matt Damon I rushed out to buy this book. But honestly I have a lot of mixed feelings about it. This is a hard core science fiction novel. Get ready to put your space goggles on.

This is a story about Mark Watney and how after a freak accident, he’s the only one left from his team on Mars after a mission. He has no contact with Earth or his team and he knows his supplies won’t last him forever. Using only the supplies left and his knowledge and wit he has to find some way to survive the desolate red planet and himself.

Let’s talk about Mark. Surprisingly, given his situation, he is mostly positive about what’s happening. He is a mechanical engineer so he can use those skills to his advantage and he is very intelligent. I was not so drawn to his whole personality though. For lack of a better word, his character was just…goofy. I mean, maybe I’m not giving him enough credit because if I was utterly alone on a planet farrrrr away with no contact I would probably go a little weird too. Just given the circumstance and the story plot, I think his character could have been written differently. At times, he was funny and sarcastic but other times I just shook my head at his immaturity. Maybe that’s just me, but I couldn’t really get on the whole I love Mark train.

What really stood out to me was that the technology and equipment that was used for the teams mission for Mars are all currently made by NASA. There wasn’t anything that was fantasized or completely made up by Weir, in fact, Weir mentions too that he only had Google to rely on for information as he didn’t have any contacts from NASA then (Interview is posted below) When Weir started posting his chapters online he had readers correcting him on some of the science of it but he also had chemists and electrical engineers calling him to discuss things he had written. I think that’s pretty impressive.

For people who are considering this book, be aware that it is quite technical. I often felt like I was reading an instruction manual. And I felt bad because a lot of it is really interesting, don’t get me wrong, I just had a hard time staying focused- my eyes were skimming the writing sometimes because I was getting bored and wanted to just get past the manual parts and get to the action. Which really sucks because then it feels like your skipping important aspects of the book and not really understanding it all.

I felt like the story did not keep me guessing. It was either that he was going to live or he was going to die. Events leading up to the end of the storyline give you a good indication of what’s going to happen. That’s all I’ll say on that. Haha. Does he live or does he die? That’s the question. But the whole point of the book is how he tries to survive living, whether he will die or not. Whatever his outcome, he gives it his all.

So, for anyone who is new to this, I rate the book on different genre scales based on the books content from 1 – 10:

Science Fiction: 10  *Full marks for this one.

Action/Adventure: 8  *Quite a few incidents where you’re yelling at Mark for his stupidity (even though you may have done the same thing in his situation) or cheering him on. Lots of action to read!

Romance: 3  **Pretty hard to find a love interest on a planet that occupies only one person. There could be a side interest however.

I hope I don’t sound too negative about this review but I wanted to give my honest opinion. I would recommend this book to anyone who loves stories about space, Mars and adventure. And to leave you off, here is a cool interview giving more information on Andy Weir and The Martian.