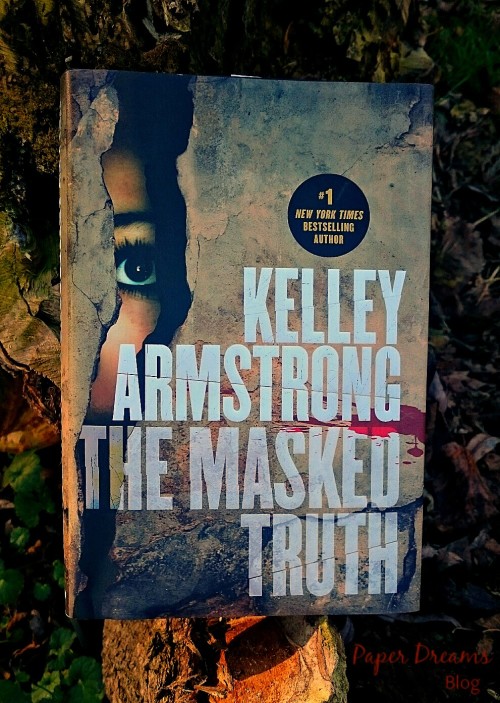 The Masked Truth by Kelley Armstrong

Newest novel by Kelley Armstrong {who is Canadian, woo!} – hot off the presses! Armstrong wrote that this book was quite different from her usual paranormal writing style which intrigued me and that I had to read it. And, it was.. different. Namely because there wasn’t a trace of paranormal-ness in it. This is a thriller mixed with horror, mystery and a bit of romance sprinkled in.

So, one of the main characters, Riley Vasquez, who is seventeen had witnessed a brutal murder of the parents of the little girl she was babysitting for- leaving her damaged BUT not in the way that you would think. Another character, Max Cross, suffers from a mental illness that he won’t share if he doesn’t have to. These two characters sign up for a weekend therapy session with other teens that have issues in an old building in the industrial part of their town to help them cope with their “feelings.” However, it quickly escalates moments into the session when masked men sneak in and hold the group hostage. You thought one trauma would be bad enough for these kids to deal with, oh no.

The novel was set up so that you were reading from both Riley and Max’s perspective. I felt that it added more depth to the story as you got Riley’s take/emotional view as well as Max’s on the situation, which was much appreciated. While Riley gave a rational, sensible point of view, Max’s was also rational but there was added humor and sarcasm. I really enjoyed reading from both of the characters. Max always had the right amount of sarcasm given the circumstance he was in, it was very fitting. While Riley was often levelheaded and sensible, I did keep thinking at the back of my mind, you’re only 17, you should be a little more freaked out right now! I don’t think most 17 year old girls would react the same way Riley would if they were in her situation {I wouldn’t} although there is some backstory as to why she’s got a strong backbone which also gave her an edge over everyone else.

So, as I got a few chapters in I started to get a bit bored. The characters had been captured as I knew from reading the jacket of the book before I actually started reading it. I thought, oh I hope this whole book isn’t about them trying to escape the building…so I put the book down and thought I would give it another try later. The next day I picked it up casually and COULDN’T put the book down. In true Armstrong fashion, she delivered some good mind trickery for the reader. If you like twists and turns in the plot that aren’t easily see-able then you will like this. However, I am a reader who doesn’t like to put a lot of forethought into what’s going to happen next because I want the author to deliver it to me. I suppose if you’re good at sleuthing through novels then you might be able to figure out what’s really happening, given that there are clues hidden along the way, of course.

This story deals with variations of mental illness. I don’t want to reveal any spoilers about which illness’ any one has but I appreciated Kelley Armstrong’s thoughtfulness and mindfulness that went into writing them. Mental illness is hard to write but SO necessary to write. She also wrote about the misconception and preconceived judgement people have about other people with certain illness’ and I think that it was definitely something that needed to be brought up. Certain words are directed at people with mental illness’, a word like crazy among other rude names that can sting. So many people are suffering from their illness and the judgement that follows it. The fact that Armstrong wrote one of her characters with a more severe mental illness and one character who worked with them with their illness, rather than against them was heartwarming to read and made me wish everyone was as open-minded. Even though this story, the situations and characters are fictional it was still a good reminder that kindness, consideration and empathy can go a long way for someone who is suffering to be  normal. {Which is highly- overrated anyways.}

As I said in my first book review post I like to evaluate and rate a novel on a variety of genres I feel it fits in. Okay scale time {out of 10} :

Mystery: 10  *Yes, who are the masked men? Why would such a horrific thing happen to a group of damaged teenagers? All will be answered if you read it!

Romance: 7  *Can’t argue with some love thrown in.

Horror: 7  *Some scenes are gruesome but Armstrong does not write them horrifically detailed or overly gory so if you’re squeamish about that kind of writing, you should be okay.

Suspense/Thriller: 8  *The cover art of this book gives me the chills looking at it. One eye peaking out? No no, stay back where you are, thank you very much, that’s usually how someone gets caught and dies. Things that people can do to other people to make them feel anguish, frightened, horrified and utter despair have always bothered me far greater than a monster story ever could.

Alright, so The Masked Truth definitely gets a thumbs up from me. That being said, I would recommend this book to older teens and up. There is some profanity and some of the scenes may be a bit too mature for a younger audience.  It was a great suspenseful read and gave me a good surprise. The book is a standalone so you will have a conclusion, which is also rare for Armstrong since she has multiple series on the market right now, so if you’re not looking for a drawn out story line then this is a good pick for you.  Once you’ve read it, comment below and let me know what you thought about it! Did you like the characters? Was it suspenseful enough for you? And even if you haven’t read it or don’t think this is your kind of book- remember to step out of your reading comfort zone, you might seriously enjoy it!