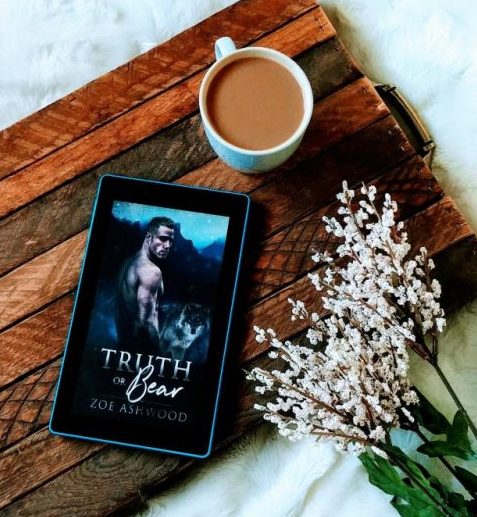 I received Truth or Bear – the second novel in the Shift series from Zoe Ashwood in exchange for an honest review! First of all, I really enjoyed her first novel, Trust the Wolf and was excited about the continuation of the series through a new set of eyes. Truth or Bear is an urban fantasy/erotic/romance novel.

Even a lone wolf’s heart can be broken.

Nikolai’s life was going just fine—until he was betrayed. He’s lost his job, his family’s trust, and his purpose, all for the cost of falling for a pretty bear. Now his friends have turned against him and they won’t stop until he’s dead. The last thing he wants to do is join forces with the woman responsible, but she might be his only chance at survival.

Getting kidnapped and shot was not part of Claire’s plan—and neither was falling for the lieutenant of the very organization she swore to destroy. Now working with Nik is dredging up all sorts of unwanted, heated memories. She couldn’t resist him when they first met, and nothing has changed when she sees his handsome face again.

But when rogues threaten their families, claws come out. Keeping secrets might have been their job description, but they’ll have to come clean to beat their enemies.

I really loved Emilia and Jason in Trust the Wolf but Claire and Nikolai were perrrrfect. Maybe it’s cause when we first start reading we already know that they have some history so seeing them try to resist each other adds some really great tension from the beginning.

Adding to the world’s dynamic

So, the world is set much like ours except there are shifters. This book expands on the Thibault family – a kind of higher power well known bear clan that was introduced in the first book. There’s also some more background on the organization that threatened Emilia in the first book and you get another side of how they’re involved with the shifter’s as well.

There is another plot underneath all of Claire and Nik’s intense eye- balling and it has to do with the organization that Nik was involved with. I thought this was really interesting and added more action to the story but could have been expanded upon for more depth with the shifter side of things. Or will it be continued on to the next book?

My favourite side character is Mat – he’s a character from Trust the Wolf that also makes a number of appearances in Truth or Bear. He’s human but I love that he’s thrust into the shifter world. I’m curious if there may be a story about him and another certain bear shifter in the works!

YES! This book was great, a wonderful story to escape into which is what I did! Now, it could be read on its own but I think to better understand the overall plot and some of the other characters you should definitely read Trust the Wolf first, which is awesome as well. I would rate this as R-rated for all those steamy scenes throughout. It’s a good mix of romance and fantasy with some fun and charming characters. I hope you will give Truth or Bear a read!

If you have read it or Trust the Wolf, let me know what you thought of them in the comments below!