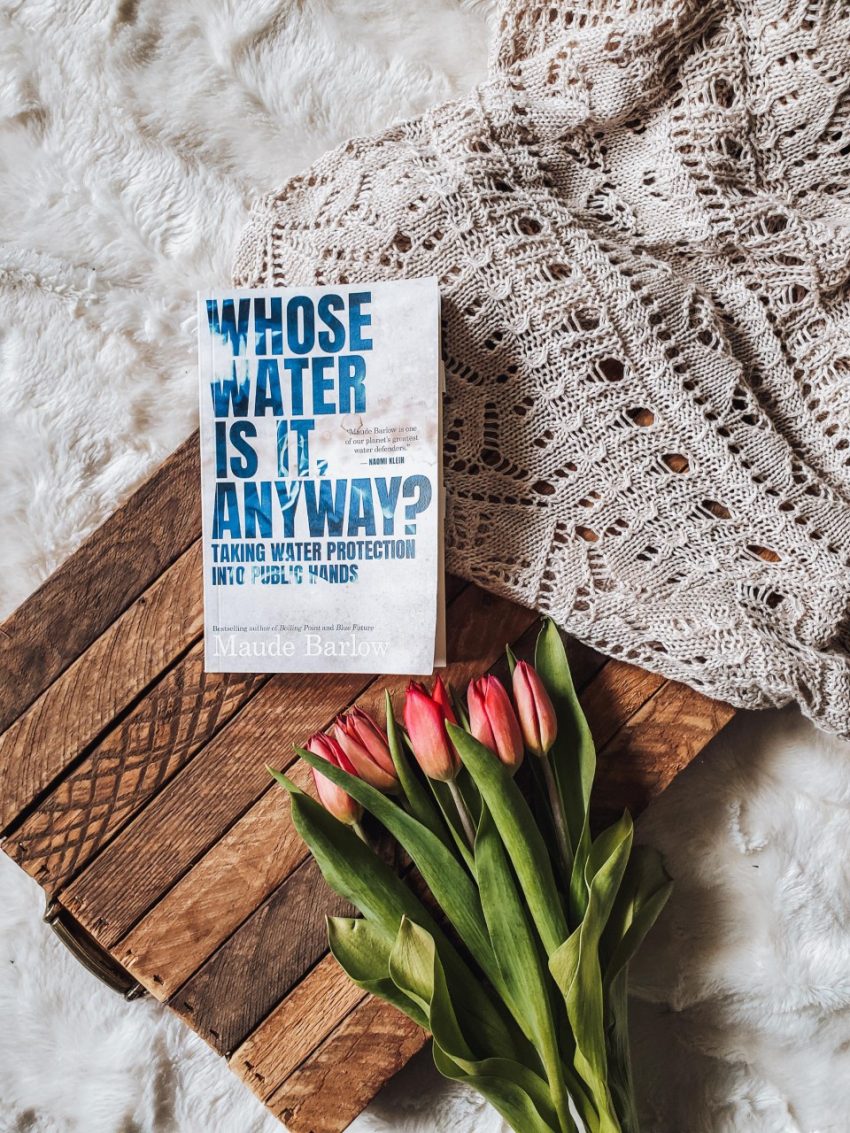 Hello! A review brought to you from quarantine zone. I hope that anyone reading this is doing well and that you’re staying safe and healthy.

I received Whose Water Is It, Anyway? Taking Water Protection Into Public Hands by Maude Barlow in exchange for an honest review from ECW Press. I’ve always been interested in issues involving the environment and the synopsis of this book intrigued me – especially from a Canadian activist!

The Blue Communities Project is dedicated to three primary things: that access to clean, drinkable water is a basic human right; that municipal and community water will be held in public hands; and that single-use plastic water bottles will not be available in the public spaces. With its simple, straightforward approach, the movement has been growing around the world for a decade. Today, Paris, Berlin, Bern, and Victoria are just a few of the cities that have made themselves Blue Communities. In Blue Communities, renowned water justice activist Maude Barlow recounts her own education in water issues as she and her fellow grassroots water warriors woke up to the immense pressures facing water in a warming world. Concluding with a step-by-step guide to making your own community blue, Blue Communities is a heartening example of how ordinary people can effect enormous change.

This is not a large book – 135 pages of content, but it packs a punch. It is separated into 5 chapters and dives into the world of water starting with chapter 1 titled – The Fight Against Corporate Control of Water. In order to understand what the fuss is all about for The Blue Communities Project, Maude starts us off by digging into some of the politics surrounding privatization of water starting in the 1980’s between Canada and the United States as well as other various countries around the world.

Maude goes into detail about some of the companies that are involved with the privatization of water as well as using it for profit – one of those products being: bottled water;

“Nestlé Waters is the number-one bottled water company in the world. Created in 1992, Nestlé has almost 34,000 employees in 34 countries and owns 49 distinct brands, such as Poland Spring, San Pellegrino, Perrier and Nestlé Pure Life, the largest bottled water brand worldwide. Nestlé Waters reports that its annual sales in 2017 amounted to almost US $8 billion.” (page 18)

Further to this company profiting:

“The Government refers to Ethiopia as the “water tower of Africa.” Abysinnia Springs, of which Nestlé owns a majority stake, pumps 50,000 litres an hour, while many residents must pay for contaminated water at private wells or walk great distances for free and unsafe water. Lack of access to clean water and other basic public services led to an uprising in November 2015. Human rights groups report that at least 600 people were killed by state security forces.” (page 20)

This book opens up more doors about what’s happening between private companies and the countries they are conducting business in.

Another example I think is important to highlight:

“…Mother Jone’s Anna Lenzer pointed out that there are two types of water available on the island (Fiji): the expensive type you can buy in a plastic bottle and what comes out of the tap, the latter being all that is available to the majority of the residents who are poor. The tap water comes through broken and contaminated water pipes and carries typhoid and gastroenteritis bacteria; the local people regularly suffer outbreaks of typhoid and parasitic infections.” (page 21)

It’s unnerving to know that these situations are current and continually perpetuated on a daily basis. I have seen the fight against bottled water before but it felt more like a common sense issue, here in rural Canada- we have wonderful water treatment plants and systems that give us good tap water, why would we buy bottled water? The only time my family ever purchased it was if we were in a pinch and needed an emergency stash. Understanding the consequences of your purchase of bottled water is an entirely different thing and I think the reasons as to why water shouldn’t be privatized is well drawn out within this book.

Aside from the deep dive into the profits of bottled water, the environmental degradation, and community displacement towards local water sources, there is a lot of positive reinforcement that is happening throughout the world through The Blue Communities Project.

In 2009, a Canada-wide gathering called the Blue Summit in Ottawa, Ontario was where hundreds of workers, environmentalists and activists came together to discuss water and where the Blue Communities project was launched to promote public water management and public drinking water.

To become a Blue Community, a municipality must:

These have become important stepping stones for communities and organizations to protect their water sources and prevent any future privatization.

I could go on and on about the details of this book but I think you should really just read it and learn more about the water wars and the steps that many, many countries, municipalities and organizations are taking on working towards being a Blue Community. It was enlightening and one of those – wow, how didn’t I know that was happening kind of reads.