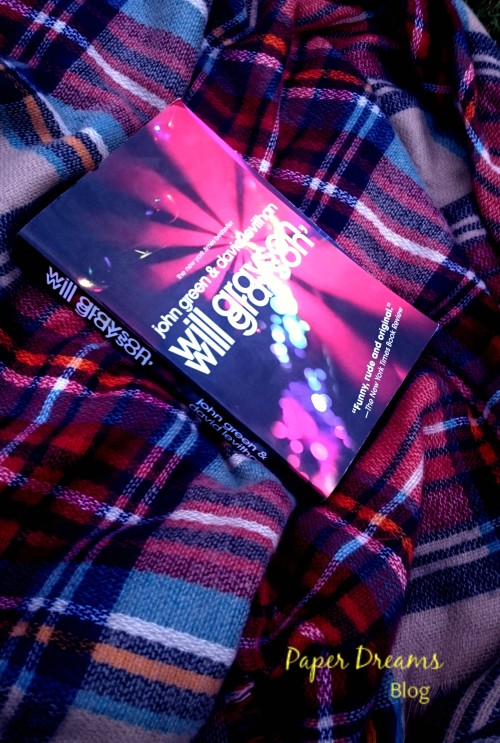 I came across Will Grayson, Will Grayson at a book sale and since I had recently read Paper Towns by John Green I was like oh, hey another John Green book with an awesome collaboration with David Levithan- I’ll check it out! I am so very glad that I did 🙂

This story is a collaborative work between two characters who both happen to be named Will Grayson. They live in the same U.S. state but not in the same city. They run in two very different social circles, only by a mere chance do they happen to meet. And it is only brief but their meeting alters their lives ever so slightly. One Will Grayson sees himself as a sidekick to his best friend while making a fool of himself in front of a potential love interest. The other Will Grayson hides the reality that he is gay from his friends and finds solace on the internet, with someone who understands him. This is a story of love, self- identity and making a musical out of your life, of course!

So, the writing style is created by flip- flopping back and forth from each Will Grayson’s perspective chapter by chapter. John Green’s Will Grayson (#1) is known for his indecisive- ness while David Levithan’s Will Grayson (#2) is quite dark, hiding his true self behind the internet. #1 WG has high expectations set by his parents to succeed and go into the medical field like them. #2 WG has trouble talking to his single mother about anything, aside from his depression. The boys are very different, but that’s what makes this story so special. I loved that they both came from different backgrounds and were so unique in personality.

Besides the Will Graysons in this story, there is another important character that is definitely worth mentioning! Tiny Cooper. He is not tiny by any means, in fact, he is very large. And very gay. He is a unique character. Tiny Cooper has a full tank of optimism and will let no man stand in his way. He is loud, creative, enthusiastic but also vulnerable and not afraid to show his insecurities.  I loved his part in the book and his part in each of WG’s lives and I continually laughed out loud from many of his lines. John Green and David Levithan did really well with combining their writing styles to not only collaborate and create Tiny but also from complimenting his character in their own way.

This story includes elements of depression. Will Grayson (#2) battles with it throughout the story. He is someone who jokes about ending their life and from my own perspective it is kind of hard to read at times. I wasn’t a fan of those parts of the book. It was still an important part of W.G. life that needed to be addressed though.

John Green is an American New York Times Bestselling Author and has seen two of his books become movie adaptations (The Fault in Our Stars and Paper Towns) who also has a popular Youtube Vlog with his brother Hank called vlogbrothers. The videos have spawned a community called nerdfighters who fight for intellectualism. You can check out more information about John Green and his books here. David Levithan is also an American writer who has written many teen fiction novels as well as collaborations- including popular movie adaptation- Nick and Norah’s Infinite Playlist and Naomi and Ely’s No Kiss List. A lot of his writing focuses on homosexual relationships. He is also a publisher and editorial director at Scholastic and the founding director of PUSH imprint, described as devoted to finding new voices and new authors in teen literature. You can find more about David Levithan and his books, here.

I would recommend this book to older teens, 15+ and up as it does have some mature content included. There was some crude language involved. Overall, a very interesting read that showcases great collaboration between the two authors. I encourage you to check it out and let me know what you think!