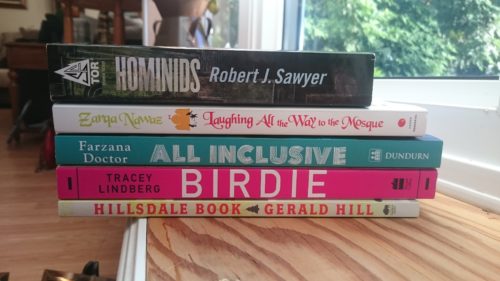 This was my 2nd year of attending the Festival of Words in Moose Jaw, Saskatchewan and again I was thrilled to be able to partake in it especially since it was hosted in my home town. This year was the Festival’s 20th anniversary! The Festival was once again full of inspirational, motivational, witty and funny authors and poets from around Canada!

Before this year’s Festival began I had taken a look at some of the authors attending and was surprised that I hadn’t heard of any of the authors before. I did start doing some background research on some of the authors to see what kind of genres would be represented. Anyone who knows me knows that I’m not much for poetry (except for Shel Silverstein) so I wasn’t really looking into those artists but more so the novel writers. So thanks to Google and Goodreads I had a better idea of who was coming to the festival! I found out there would be some non- fiction, fiction, science fiction, fantasy and comedy writers attending who have won some big awards in the literary world!

The festival started on a Thursday and ended on a Sunday (July 14- 17th) and it was jam- packed with events throughout the four days. Since I was only able to get three days off I’ll tell you about those days and of the events that I attended. I should also mention that I had the Flex Pass and it doesn’t give you full access to the festival so I just had to be more picky about which events I wanted to attend.

Readception: The first big event of the weekend that was held at Mosaic Place downtown Moose Jaw at 8:30 pm. It was a really good introductory event that had six authors and a poet read from their work; Tracey Lindberg, Farzana Doctor, Ian Keteku, Ernie Louttit, Pierrette Requier, Anakana Schofield, and Zarqa Nawaz with Angie Abdou (another author) moderating the event. It’s an excellent idea, I loved that they picked various authors who wrote different genres to give some diversity to the crowd. It was like a mini taste test to see whether you would eat the rest of the pie. As I said, poetry is not normally my go to but after hearing Ian Keteku I knew that I would like to hear him again at the festival. Some of the authors I was intrigued by from this event was Zarqa Nawaz, Angie Abdou and Farzana Doctor! There was also pie, cake, wine and coffee served here, good choices!

On Friday and Saturday the festival is set up in which there are different panels or sessions happening in 50 minute intervals in various rooms (@ The Moose Jaw Public Library and Art Gallery) with multiple authors at once. So for the 9 am time slot (it was an early morning for me, *yawn but for the love of books, I made it) Connie Gault and Tracy Hamon were in a room together. I wanted to hear Connie Gault speak as I had read her latest novel, A Beauty. So typically in these sessions the authors read snippets from their book or poets read a few of their poems and they talk abit themselves while answering questions near the end of the session. Typically, even if you don’t have a flex or full festival pass then you could pay around $10 to come see and hear an author that you favor talk without having to purchase the amount of a festival pass. I really like these kind of sessions as you get more information on both of the authors while hearing them read from their work.

I attended the festival with my grandma so after the first session we took a coffee break and went to The Discovery Room (I think that’s what it’s called??) which is a room down by the art museum that hosted the book sale. Uhm, yes this is probably one of my favourite parts of the festival. Browsing all the books! Here, you can do a quick read up of all the authors/poets and browse and browse all of the wonderful books. It was at this time that I picked up Laughing all the way to the Mosque by Zarqa Nawaz (Good thing I did because it was sold out by the end of the festival) and Hillsdale Book by Gerald Hill. AND the absolute best moment was that I happened to be there right when Zarqa Nawaz was sitting down to sign books and everybody else was busy at other sessions so it was just my grandma and I around so I had a very lovely and pleasant conversation with Zarqa Nawaz and when I told her I have a book blog she asked if I would take a picture with her book, so we promptly had my grandma take a picture of us! Zarqa is a very funny lady who has a very successful career, she is the creator of Little Mosque on the Prairie, a hit Canadian sitcom. She gave me advice that I should start writing and to just go with it. Hmmm…maybe, Zarqa, maybe! If only I could keep on top of my book reviews (haha)! Anyways, that was one of the highlights of the festival for me, meeting Zarqa Nawaz, getting a picture with her and having her sign her book (which is very funny by the way!)

The next session we went to was around 11:30 am and it was a solo session with Anakana Schofield. She read multiple sections from her new book, Martin John and talked about her inspiration for the novel and what her mother thought about it. She is a really hilarious person without meaning to be. She writes from some dark sociological and psychological perspectives, probably not for the faint of heart.

Next session we attended was lunch! Thank goodness because I was hungry by then. St. Andrews Church hosted a lunch that was catered and it was fantastic!! The church is just across the street from the library so not a far distance to travel. Here, they had a buffet kind of set up – tons of delicious salads and pulled pork was the main feature. While people were eating, Angie Abdou, another author who grew up in Moose Jaw interviewed Zarqa Nawaz about her new book and her tv show, Little Mosque on the Prairie as well as her family life. Again, this was a wonderful event because a) great food and b) a very comedic and personal interview from two funny ladies.

We took a break in the afternoon to do some shopping at the mall and to go for coffee but we were back at the next session at 4 pm with Douglas Gibson, who is best known as the president and former publisher of McClelland and Stewart. His session was at the Mae Wilson Theater so he had a large audience for his slideshow presentation. He has been in the publishing industry for quite some time so we got to hear some quirky stories from him about other Canadian authors he has worked with in the past such as Margaret Atwood, Terry Fallis and Pierre Trudeau.

The last event of the day was not something I thought I would be going to but my grandma said she had went to it last year and thought it was great. At 8 pm we were back at the Mae Wilson Theater for a Poetry Slam! Man, it was really entertaining! The artists and poets were really talented! The poets they had asked to perform were competing against each other to partake in a panel session on Saturday, so there were some high stakes involved! Some of the poems I heard got me quite emotional and others had me in stitches, it was a really diverse event and I actually really loved it! I definitely recommend this event to everyone even if they aren’t attending the festival!

The first event I attended was at 11:20 am (slept in a bit, yay!) and it was another session with two authors and they were Robert J. Sawyer and Arthur Slade. They were really the only two authors at the festival this time that touched on fantasy and science fiction so I was definitely excited to hear them. And I was not disappointed! I bought Hominids by Robert J. Sawyer after hearing him read one of his other books and Arthur Slade’s newest book, Flickers is on my radar.

I took some time in between sessions here to have lunch with a friend and to read and take pictures of the books I had bought in the park surrounding the library. It was a beautiful day and perfect to just sit on a park bench and start a good book (in this case I started Laughing all the way to the Mosque by Zarqa Nawaz) .

The next event I attended was around 2:20 pm and it was a dramatic reading of The Ghost and The Darkness at the Art Gallery Theater. I really enjoyed the dramatic reading I saw last year so I was again impressed with this year’s performance. So basically you just sit back and listen to these actors read from a script on stage. They don’t move around or do any physical movement, they just sit on their stools and dramatically read. Yup. It was awesome and well executed for only having been practiced between the four actors a couple days beforehand.

Sunday is always a great wrap-up to the festival. If you attend the morning session then you’re in for a treat. First of all, you get a freaking fantastic breakfast buffet at Mosaic Place (where my evening started off on Thursday). Second of all, there are two panels that happen one after the other here. The first one, which is called The Creative Process had poet Tracy Hamon moderate it while Farzana Doctor, Ian Keteku, Tracey Lindberg and David Carpenter commented on the questions asked. The second panel was discussion moderated by Arthur Slade with another four authors who focus on comedy; Susan Juby, Zarqa Nawaz, Anakana Schofield and Douglas Gibson. I think this is excellent programming done by the festival coordinators. Everyone gets fed well, learns about the inspiration, motivations and the whys to how some authors get through the writing process ending off with the artists who specialize in funny so that you’re smiling and laughing as the festival comes to a close. I loved it.

I absolutely love the festival. If you look at the festival programming here, you will see that there were loads more sessions and events that occurred. So, the ones I talked about above were only a snippet of the full festival! If you would like to discuss the festival or have a comment about anything, please drop me a comment or send me an email! 🙂

Hope you enjoyed my review! Maybe see ya at next year’s festival!? Happy Reading 🙂