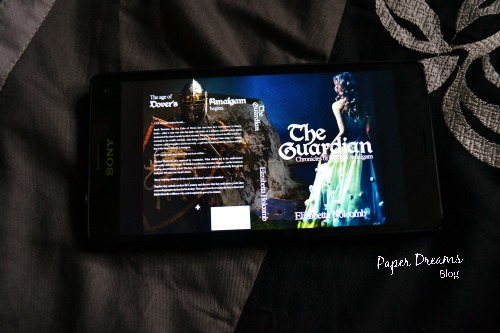 I had the pleasure of receiving Elizabetta Holcomb’s The Guardian not too long ago and loved it!

{Synopsis of The Guardian from Goodreads}

Jareth Tremaine, the first Duke of Dover, has seen how he’s remembered in history books—either a saint who rules his lands with justice or a religious extremist whose harsh treatment of the church nearly has him executed. But what history doesn’t disclose is that he’s essential to the world’s survival. After being wounded by ancient Huns using 21st century weapons, a girl is brought to aid his recovery—a girl who would become his duchess and the key to the future of Dover’s Amalgam.

A 21st century girl whose future has not been written…

Elizabet Blackwell isn’t surprised by wormholes. What shocks her is the multi-faceted personality of the titled knight. Sir Jareth is a nobleman, translator, surgeon—and he’s intent on locating and protecting a host. The host, she discovers, is a boy who practically lives in her backyard 700 years into Jareth’s future.
The re-scripting of history for the survival of nature’s attack on mankind…
Together they embark on their life’s journey and discover that they must protect each other even as they prepare the host for his destiny. Their quest must be to ensure the boy is secure and hidden from the evil forces who seek to exploit the power he contains.

But let’s go behind the scenes and hear from Elizabetta herself!

1. What was your inspiration to write The Guardian?

Several years back, my 3 oldest children were obsessed with Smallville. Truly, a young Clark Kent started the whole concept of Jeremy. I initially wrote the stories for my daughter, Jillian. She loved the stories so much that I kept adding to them and they grew and grew and grew…you get the picture! So, everyone can thank Terry, Trey, and Jillian for their obsession with super heroes. Without their inspiration, Dover’s Amalgam would not exist.

2. Was there someone who inspired you for the character of Jareth?

I always have a character sketch for my male characters, so I definitely know what/who Jareth looks like. His character traits were difficult, because he is medieval and he can be harsh. I couldn’t make him too liberal or that wouldn’t be believable. He had to be a difficult person and stubborn, because we have to remember where he’s from and who he is. But, he is also compassionate and tender hearted to orphans and the weak with make him SO NOT the average knight of old. I tried to steer clear of clichés. I don’t like them when I read and it’s a peeve of mine. I hope that my characters are authentic and original and not the average sterotypes.

3. Speaking of characters, I noticed Elizabet is similar to your own name, Elizabetta. Did you model her character after yourself?

Totally coincidence; I promise. Elizabetta is my middle name and the character Elizabet is actually after my great, great grandmother who my mom called “Mama Elizabet”. When Mama Elizabet was a young newlywed, she ran over her husband with a horse plow (Don’t worry—he lived. LOL). Cajun woman are spirited creatures and I wanted to capture that and honor my mother’s heritage. Elizabet is a mixture of my great, great grandmother, my mom, and my daughter Jillian. But, the character Elizabet has her own physical look. I usually don’t have a physical character sketch for my heroines, but there are exceptions. Like Beau, the heroine for the next book. She’s a ringer for my childhood best friend’s daughter, Beau, who is the living breathing character sketch for her namesake.

4. What was a favourite scene to write?

When Jareth and Elizabet meet their future offspring. I know how each of these kids destiny turns out, so it was fun foreshadowing things to come. This series will have 8 books total. Each child will have their own story to tell, starting with the adoptive first, Jeremy. Solomon, Abigail, Peter, Gideon, Benjamin, and Honor will all have their turns!

5. What was a hard scene to write?

I’m weak with action scenes, but I have an AMAZING editor. She makes me look good. I couldn’t do this without her. She walks into a room filled with my pushy characters and tells them to take a number! LOL. I have trouble with POV slips a lot. When I was younger, I wrote in first person, but when I went to college, professors frowned upon that, so I changed. Obviously, I still struggle with wanting to write in first person, but third person can be a good spring board for multiple viewpoints. I think most people think that with indie authors, we just throw a novel out there. It’s not like that. There are multiple rounds of edits and proof reading. There’s a lot of hard work and hundreds of hours that go into each book. So, for me, staying in my chosen POV is hard (always) and action scenes.

6. I know you don’t want to give all your secrets away but anything you can tell us to expect for the next book?

Jeremy’s story is written and with my editor. Category Jeremy is scheduled for release on June 1 and so far, everything is on schedule. I’m currently writing Solomon’s story which will come out sometime in September. This series has been written for years, I’m merely making edits and making it better. Jeremy’s story is exciting. He’s a virtual Clark Kent. He has to hide who he is to survive and protect the Amalgam. Think coming of age and the struggles that come with that. The blurb for his story is up on my web site. I cannot wait for everyone to read his story. To me, The Guardian was back story. Things get real with Jeremy. This is where the heart of the series starts. I think everyone will be shocked at the difference and there will be less confusion. Most questions left up in the air in The Guardian will be answered. Jeremy is a sweetheart, but a fierce force of nature. He’s complicated to say the very least. You will love him! He’s going to take the fiction world by storm (pun intended 😉

7. Last question, what books or authors inspire you?

I have so many favorite authors that it is hard to choose. My mother was a librarian so I have always been a voracious reader. My childhood favorite was V C Andrews. I had all these morbid posters of her book covers on my wall, right next to my Duran Duran posters. She’s pretty intense and gothic (and she wrote in first person which was radical back then). But, I grew into historical fiction. I love a good romance story that has history splashed all over. I love Julia Quinn, Lisa Klepas, Mary Balough, Lorraine Heath to name a few. And I’ll be honest (just don’t tell anyone); I loved the Twilight series. That stuff was mind crack, I swear! Team Edward, by the way. I’ve also devoured the Harry Potter series. He’s such a sympathetic character. I didn’t want his story to end—ever. I love the classics too; Nathaniel Hawthorne is my ultimate fave. I also read lots of non-fiction. I have an obsession with church history. If you want drama, just study the origins of the church. It’s crazy fascinating. I always have 3 books going: a romance novel, a history, classic, or art book, and a doctrine/church history study. I like things that make me think and use logic. Research is my forte. Eclectic, but totally me. You can thank my momma for that quirk; it’s in the genes. (haha)

Thanks so much for your time Elizabetta! You can check out her website here.

Go check out The Guardian, my review of it is here.