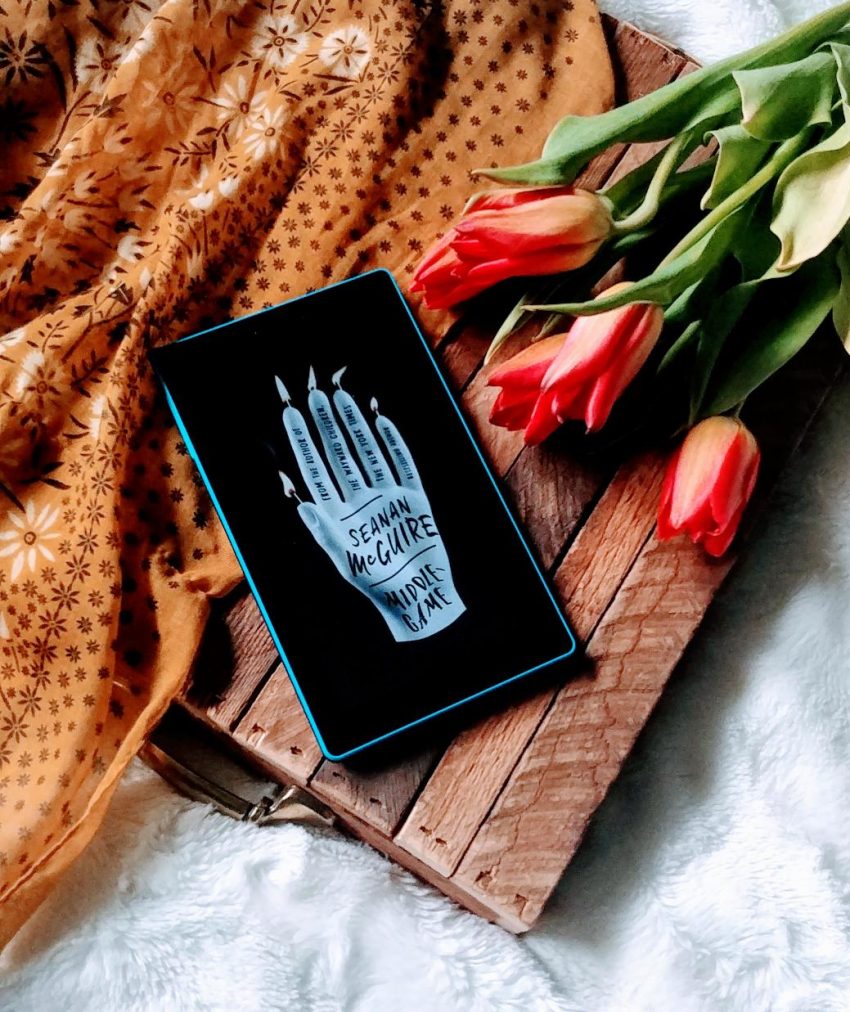 I requested Middlegame by Seanan McGuire through Netgalley when I saw it being offered to review. I received an e-book version. I read Every Heart A Doorway by Seanan McGuire and liked it and enjoyed her idea and writing style so I was interested in Middlegame after reading the synopsis. Middlegame is an urban fantasy mixed with science fiction.

Meet Roger. Skilled with words, languages come easily to him. He instinctively understands how the world works through the power of story.

Meet Dodger, his twin. Numbers are her world, her obsession, her everything. All she understands, she does so through the power of math.

Meet Reed, skilled in the alchemical arts like his progenitor before him. Reed created Dodger and her brother. He’s not their father. Not quite. But he has a plan: to raise the twins to the highest power, to ascend with them and claim their authority as his own.

How to review this book?

Okay, I’m trying to determine how to review this book without giving away spoilers. I was trying to explain this book to a friend of mine and said that it was amazing and she asked me what else can you tell me about it and I said I don’t know what to tell you beside the fact that you MUST read it and if I tell you anything else it could be a spoiler. No joke you guys.  Side note – We came to a conclusion that this book is as awesome as The Library at Mount Char by Scott Hawkins in the fact that it’s hard to explain to people the details of the story because it’s so weirdly different and wonderful that in order to really grasp it all they would just have to read it themselves.

But I’m going to try to touch on a few basics.

Get used to Roger and Dodger because they are the main focus or the focus of the whole story. The story switches from both of their perspectives and then sometimes to Reed and a little bit of Leah, his alchemist creator of a sort. Erin is also another character that becomes a lot more prominent in the second half of the book but I don’t think the perspective shifts to hers, if it does it’s very little. Although I would’ve like to have seen more from Erin’s perspective. She was a very interesting side character.

Confused by their names? Again, you’ll have to read the book in order to find out why they are named the way they are. Or is it another author ploy to get you to remember another weirdly unique book character name? Who’s to say? I liked Dodger more than Roger. Roger could be frustrating and though I liked him at times I was often more annoyed with him and with some of the choices he made. Dodger was feisty and didn’t shy away from anything thrown at her. Together though, together they are better.

While Roger has a way with words, Dodger is a master of math. I LOVED the concept of this – them being twins while each mastering two subjects that determined the laws of the universe. It was SO COOL how McGuire executed this whole idea.

Middlegame was a fun and dark read. I felt like I had to slow down my reading pace to make sure I understood and remember certain parts. I wouldn’t say it’s a super easy read but not a difficult one either. It’s definitely a lot of fun and very unique. I enjoyed the writing style quite a lot.

One might believe this book has some magic to it and maybe it does but it’s mostly based on alchemy. What is alchemy you ask?

Alchemy – a form of chemistry and speculative philosophy practiced in the Middle Ages and the Renaissance and concerned principally with discovering methods for transmuting baser metals into gold and with finding a universal solvent and an elixir of life. (Dictionary.com)

This is important to understand from Reed’s perspective, he always has an ulterior motive for Roger and Dodger – they aren’t human – they are an experiment, his experiment. That’s the part that trips me up, they are basically human but they’ve been created for greater things – they just don’t know it yet.

I think this is my favourite part of the story. The whole progression of Dodger and Roger being children when the story starts and reading different stages of their life throughout the book and them ultimately finding out what they are and what they can do as they grow and mature. This added so much more background detail to the twins characters and their decisions and I enjoyed watching them as they grew, fumbling over mistakes, triumphing when they could and always interconnected with one another. I don’t think this story would have been as powerful if it was written any other way.

I thought this was a cool title and reflected how the story was much like a game of chess and from the beginning till the end – it was all just the middlegame. Fun fact – Dodger is also a successful chess player!

A thousand times yes, I recommend! Middlegame is a very unique story and I think anyone who wants to give this epic novel a chance – should! Seanan McGuire is a wonderful writer and always seems to have a trick up her sleeve. This is a story that really makes you appreciate good writers and how they weave their words. I don’t know what else to say other than you MUST read this book, it’s so epic!!

If you’re thinking of purchasing it from Chapters/Indigo, click here –> Middlegame by Seanan McGuire