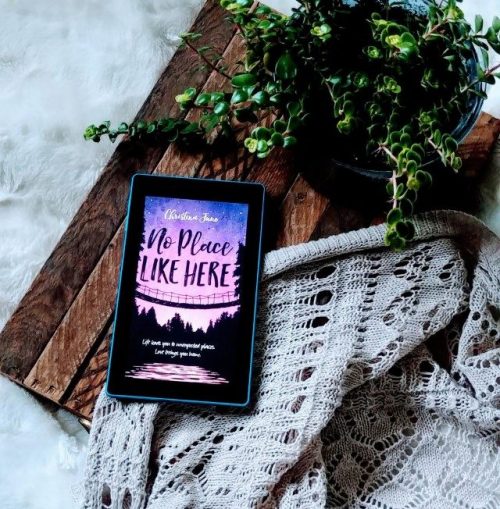 I received an ebook of No Place Like Here by Christina June from NetGalley after I requested a copy from reading the synopsis. I’ve also read It Started With Goodbye which is set in the same universe but doesn’t have to be read in order. This could be read as standalone. It’s a contemporary with some light- hearted romance.

Ashlyn Zanotti has big plans for the summer. She’s just spent a year at boarding school and can’t wait to get home. But when Ashlyn’s father is arrested for tax evasion and her mother enters a rehab facility for “exhaustion,” a.k.a. depression, her life is turned upside down.

The cherry on top? Ashlyn’s father sends her to work with a cousin she doesn’t even know at a rustic team-building retreat center in the middle of nowhere. A self-proclaimed “indoor girl,” not even Ash’s habit of leaving breadcrumb quotes—inspirational sayings she scribbles everywhere—can help her cope.

With a dangerously careless camp manager doling out grunt work, an overbearing father trying to control her even from prison, and more than a little boy drama to struggle with, the summer is full of challenges. And Ashlyn must make the toughest decision of her life: keep quiet and follow her dad’s marching orders, or find the courage to finally stand up to her father to have any hope of finding her way back home.

So, I did say at the beginning that you could read this as a standalone but if you read It Started With Goodbye and Everywhere You Want To Be it will provide more context with certain characters mentioned throughout the story as well as some preliminary background on Ashlyn.

Ashlyn came off as annoying at first but she grew on me as I sympathized with her family life and how misunderstood she was. She has a complicated relationship with her parents that is ever present throughout the story. Her dad has been very emotionally abusive in the past – trying to push her to be better but in a very damaging way that really affects Ashlyn as she tries to make choices – his voice always in her head. I guess it was hard for me to relate with her in the sense as my family life has never been like that but I understand that Ashlyn is being constantly pressured instead of being able to make choices in a healthier environment.

Of course, Ashlyn is at a summer camp, there’s gotta be a summer fling, right? This part actually made me cringe. The situations and conversation felt very forced and almost “preachy”. I guess it just didn’t work for me.

Ashlyn struck up a friendship with her cousin Hannah and it was probably my favourite part. Hannah has some misconceived notions about Ashlyn since they haven’t seen eachother in a long time and only knows some of the family drama going on and isn’t game for Ashlyn to be working with her for the summer. However, they begin to see eachother in a new light and realize that their assumptions about one another isn’t all that true and that they could be friends. Honestly, if the author had just scrapped the whole romance side of things and worked on more scenes with Ashlyn and Hannah I think I would have enjoyed it more. It resonated with me and I enjoyed reading about them becoming closer again.

I was interested in the summer camp/retreat that Ashlyn was sent to. It was supposed to be a punishment by her father but it was really probably the best thing for her. Sure, there was some wonky things happening with the management of the place but overall it seemed like a fun place to be. There were only a couple scenes that incorporated camp like events like a staff bonfire and zip-lining. Ashlyn was also not a fan of being outdoors at the beginning with the bugs and the dirt but there is a scene at the end where she appreciates where she is. I would liked to have seen more of the space used for context but I enjoyed the setting and it sounds like a place I’d definitely visit!

Other than the romance part falling flat for me, I liked Ashlyn’s story and how she came to find herself a bit more at the camp and flourish in a more positive environment. I think the aspects between Ashlyn and her father as well as the dynamic with her mother is not to be taken lightheartedly but it was as though the issues were just being scratched on the surface. (Perhaps a sequel to see how the family is faring?) However, many teens could probably relate to feeling the kind of pressure Ashlyn felt. It was a good read and I’m glad that Christine June wrote a story on Ashlyn. 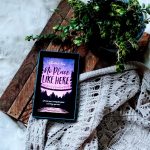 It’s a great teen fiction. I do recommend for those that want something a little heavier but not overbearing. It’s a great coming of age novel. I would rate it as PG as there is no coarse language or explicit content.

Recommendation to the author!

This is a hopeful wish. I think it would be really neat if Christina June wrote a story – 5 or 10 years into the future with Tatum, Tilly and Ashlyn (the main characters from each of her 3 novels) that focused on all 3 girls and where they are in life – what paths they have chosen or not chosen, who they’re with, how their family life is going. I’m invested in this world, I’d definitely be down for this!! And if she chooses to write a story – maybe about Hannah in the future, I’d be down for her joining this future novel as well. One can dream right?

Have you read No Place Like Here or any of Christina June’s books? What did you think??