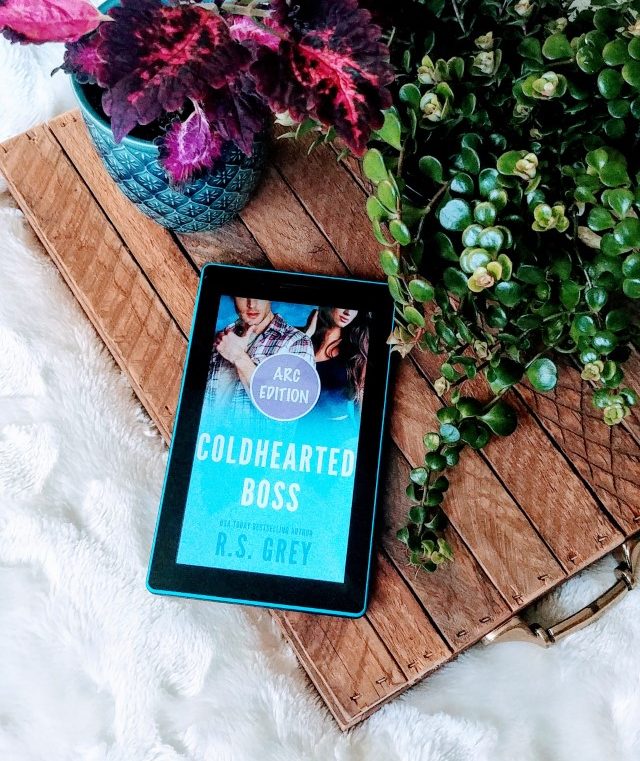 I received an Advanced Reader’s Copy of Coldhearted Boss from R.S. Grey – her 20th romcom!! What a feat! And once again she delivers a fun, lighthearted, sexy story! Another one I really enjoyed 🙂

I’m desperate and destitute when Lockwood Construction rolls into my small town with an offer too good to pass up: high wages to any able-bodied man willing to join their crew.

Say no more. I throw on baggy clothes, tuck my long hair under a baseball hat, and apply for a job. Unfortunately, my half-baked idea of disguising myself as a guy is flawed from the beginning. As Shakira says, these hips don’t lie.

Still, I like to think I might have pulled the whole thing off save for one thing:

I know my boss.

Last month, we met at a bar, and after a fiery first encounter, it seems we’re destined to be sworn enemies.

Ethan Stone is ruthless and arrogant, a man I never would have crossed had I known how much he likes to toy with his prey.

He should just fire me and be done with it. Instead, he decides to make me his personal slave. Oh right, I think they’re calling it personal “assistant” these days.

It’s torture, all of it—his bad attitude, his ruggedly chiseled face, his desire to grind me into dust.

Every one of our friction-filled battles burns hotter than the last.

A girl can only hold out for so long. Soon, I’m bound to go up in flames.

My objective? Survive the heat long enough to send home a paycheck.

My real objective? Stop having X-rated fantasies about my coldhearted boss.

I love that R.S. Grey doesn’t play around. Sure, it’s considered a slow burn but usually the characters meet up within the first two chapters to get you acquainted and there was no disappointment here! Taylor and Ethan get off to a fiery start leaving you wanting more! I was feelin for Taylor’s character and really wanted a win for her.

I enjoyed that this was told through Taylor and Ethan’s perspectives. I enjoy multiple perspectives as it does help round out the story and I believe it made the story more interesting. I don’t think I liked one more than the other – they were about the same. The story did feel short so there wasn’t a whole lot of background or more discussion on out of plot thoughts other than interactions between Taylor and Ethan it seemed like and that’s kind of a given for these kinds of stories.

One of the things that bothered me was a workplace factor. Ethan is a project manager -if I remember correctly- for a company that is going to build a resort village close to Taylor’s home town. But the fact that Taylor was the only female that signed up for the construction crew seemed a bit – medieval? This is set in modern times so I highly doubt that she would have been the only female (At least in Canada this wouldn’t be the case). I get that it was probably just a plot point to isolate the interactions between Ethan and Taylor but it still kinda irked me. Maybe Taylor would have made friends with a female group? She really did need a good girl friend.

Once again, R.S. Grey did not skimp on the romance and hyping up the reader for some good steamy scenes. I enjoyed the banter between Ethan and Taylor had with each other and I particularly liked the campfire scene 🙂

Yes! If you’re in the mood for a light-hearted romcom then this is definitely a good one! It’s a feel good love story with some steamy scenes, because of those I rate it R but I definitely recommend!!